A Serbian volleyball player has apologized after making a slant-eye gestured towards a Thai team at the FIVB Volleyball Nations League tournament. The incident occurred when the two teams were playing a match in Italy.

The Volleyball Federation of Serbia responded by issuing an apology statement. The statements come after Serbian player Sanja Djurdevic was caught on camera using two fingers to pull back her eyes in response to a Thai player who failed to score a point.

“We are deeply saddened by the recent events that took place during the Serbia vs Thailand #VNL match in Rimini and the unfortunate gesture of our player Sanja Djurdjevic,” the statement read.

“We apologize sincerely to the Thailand team, people of Thailand and to all of you affected by this.

“But, please, don’t blow this out of proportion! Sanja is aware of her mistake and she immediately apologized to the whole Thailand team. She only wanted to show her teammates ‘let’s start playing defence like them now’, she didn’t mean any disrespect. Of course, it was unfortunate.

“It all ended up as a simple misunderstanding, in a friendly atmosphere between the players of the two teams. ”

Djurdevic also issued a similar apology via social media, echoing her team’s message. “I am aware of my mistake and I immediately after the match apologized to the whole Thailand team,” she wrote on an Instagram post.

“I only wanted to address my teammates with the message: ‘now we will start playing defense like them’, I didn’t mean to disrespect anyone.”

Thai player Pleumjit Thinkaow, who made the error that led to Djurdevic’s gesture, posted a video with the Serbian player, saying she accepted the Serbian’s apology.

“Everyone. [Djurdevic] walked to our room. She said she was so stressed. She said she didn’t have the intention [to offend us]. Please forgive her,” Pleumjit wrote in Thai. 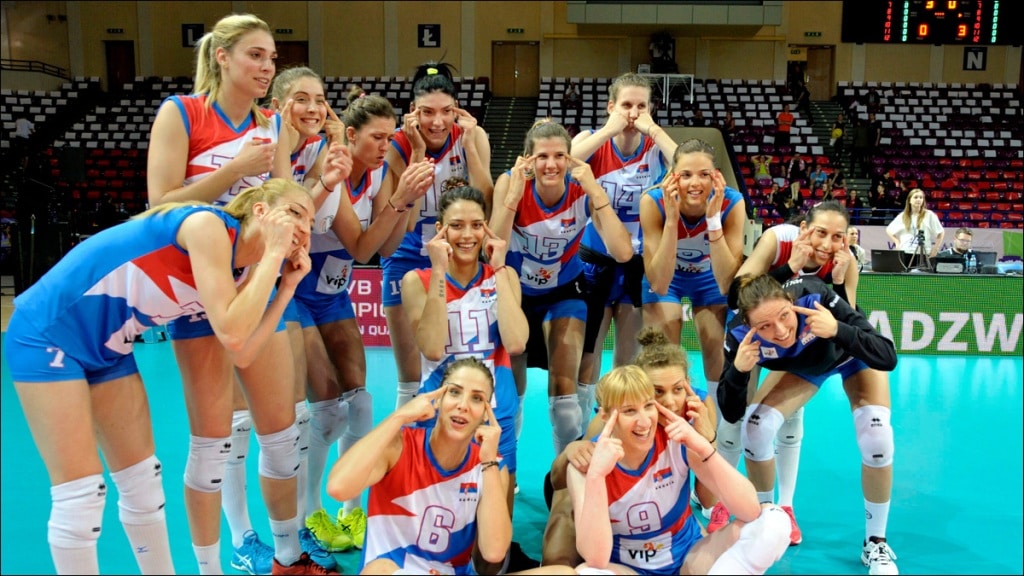 This is not the first time the Serbian women’s volleyball team made racist gestures in 2017 the squad won a match that earned them a spot in the 2018 world championship, to be played in Japan. The ladies celebrated their victory by posing for a group photo while making, naturally, a racist slant-eye gesture.

The photo above, which originally appeared above the FIVB’s story about the game but was later removed.