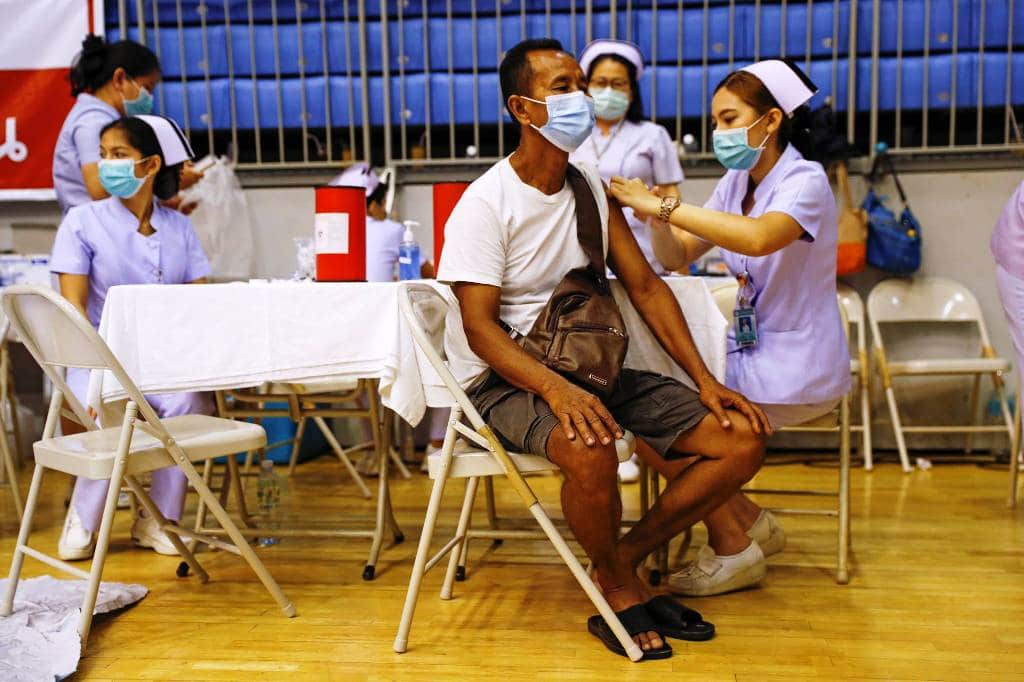 A deputy spokesperson for Thailand’s Ministry of Foreign Affairs, has said all expats are eligible to receive the Covid-19 vaccine, that great if you can get one.

Deputy spokesperson Natapanu Nopakun says Thailand plans to roll out a “massive vaccination plan” to vaccinate all people who are living in Thailand, including foreign residents.

“All people residing in Thailand, regardless of nationality, are eligible to receive the vaccine under the plan.”


However for foreigners in Thailand, unless they happen to work for companies with “connections” or perhaps a public service that was earmarked in the first roll out of vaccines, the vast majority are doing more damage from scratching their heads at the moment, The Thaiger reports.

Not one private hospital in Thailand currently has access to its own stocks of an approved Covid 19 vaccine.

The Thai government is apparently still putting up red tape barriers preventing any private solutions to the country’s vaccine roll out fiasco.

Somewhere between a current shortage of available vaccines, generally, and the Thai government being forced to sign off on any private orders, there has been no movement on the “private vaccine” front.

Dr Suwadee Puntpanich, a director at the Thonburi Hospital Group, told the Thai Enquirer that it’s currently “impossible for the private sector to bring in vaccines due to the government’s inaction”.

“We have sent numerous applications for vaccines to the Ministry of Public Health, to the minister, to the permanent secretary and have received no response”.

Given that the private medical sector would have contacts to negotiate and import drugs from international pharmaceutical companies, you’d think they’d be the government’s first phone call. But no.


The Thai government has established their own supply chains, dragging out the process as a third wave of COvid-19 hits Thailand. The vaccine roll out in Thailand way behind peer nations and most of the rest of the world.

According to the Bangkok Post the Thai Chamber of Commerce (TCC) says that it might be too late for the private sector to procure covid-19 vaccine supplies amid intense global demand.

A statement issued by TCC says the government can afford to buy enough vaccines for people, so “the private sector does not need to acquire more and add financial burden to company budgets already affected by Covid-19”.

“The private sector is negotiating to import ‘alternative vaccines’, but it’s difficult and we have to wait in a long queue because many countries are scrambling for them,” said TCC chairman Sanan Angubolkul.

“It may be next year when we receive vaccines, which is too late to achieve our target to have 70% of the population vaccinated within this year.”

Thai Prime Minister Gen Prayut said last Friday his administration plans to distribute a total of 100 million doses of Covid-19 to 50 million people by the end of 2021.

The government already secured a purchase of 64 million doses of AstraZeneca and Sinovac vaccines, both of which are under international scrutiny.

This week the Prime Minister decided to take control of the Kingdom’s vaccine roll out and covid-19 cases spiral out of control and vaccine rollouts are dismal.

There has been some quite public friction between the PM and his outspoken Public Health Minister Anutin Charnvirakul in recent weeks. This decision to take over the decision making in Thailand’s public health sphere is the equivalent to throwing his Bumjaithai party political partner under the bus.

Last week there was loud calls from opposition parties and social media for the resignation of the public health minister. Everything, from the shortage of hospital beds, the lack of vaccines, the decision to let Songkran go ahead, largely unfettered, and a slow reaction to the current outbreak have all fallen on the desk of Anutin.

The PM’s taking over of decision-making for Thailand’s public health at the moment may be an indication of strong, determined leadership. It’s also risky with Anutin pulling the strings on a rump of MPs that secured the PM his majority in the lower house following the 2019 general election.

A petition hosted on Change.org, demanding the resignation of Public Health Minister Anutin, has surpassed an initial target of 200,000 signatures. The target has now been increased to 300,000. 211,600 signatures have already been collected.

Also, as of this morning, the requests for signed paperwork from Thailand’s private hospital sector have remained unsigned.