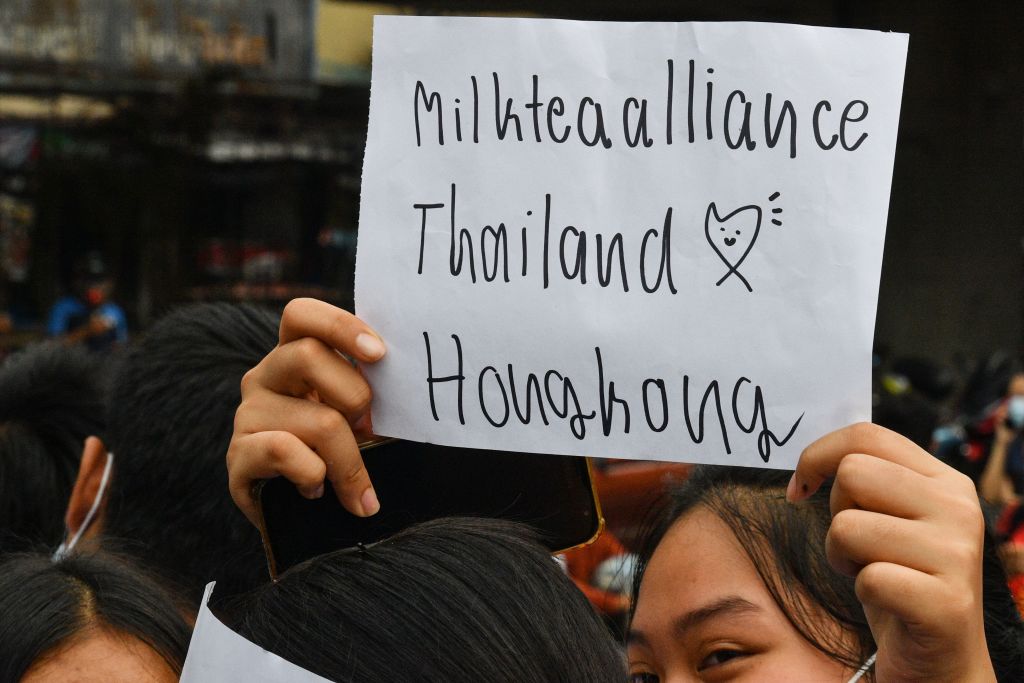 After a coup d’état had been chosen as an approach to overrule an electoral defeat in November. The Tatmadaw, once again, created a large public backlash among citizens in Myanmar. Thousands of protesters supported by the Milk Tea Alliance had gathered on the streets of Yangon to show their disagreement with the coup.

This time, with the junta leader General Min Aung Hlaing to blame, a near-month-long protest that spread throughout the country is surely getting out of control. Even bullets are not powerful enough when it comes to the people’s will for democracy. This does not simply pose a troubling headache for military chiefs, in Naypyidaw. But it is simultaneously dragging global attention with threats to impose sanctions daily.

No matter how the military is trying to suppress the dissents, the coup’s aftermath is an obvious reflection that Myanmar, or Myanmar citizens, to be clear, had gotten themselves a one-way ticket to join the Milk Tea Alliance (MTA).

Emerged last summer, as an active bottom-up internet phenomenon, the MTA became one of the biggest unofficial online communities comprised of Asian progressive youths who share their passion to fight for democracy.

For starters, the rationale behind their symbolization of milk tea is technically simple. It originates from merely a tea-drinking culture and a combination of the Taiwanese boba’s counterpart, which is widely common in Asia. This makes it, in some way, relatable to most youth in places like Thailand, Hong Kong, and Taiwan.

However, the puzzle that remains unanswered is whether such club really holds its relevancy. Since it is not a state-level initiative launched by a network of high-profile officials through a proper diplomatic channel. See, most of its members thus possess no actual executive power in their politics domestically.

Though this is partially true, it would be a mistake to draw up a conclusion that the club holds no negotiating power at all. The fact that it is an online-based coalition has equipped it with essential skills from a bunch of tech-savvy members. And when these individuals could unite, they form an even more effective movement that can easily outsmart the authority. Every time they plan to launch a rally, they are one step ahead from the government.

A not-so-secret ingredient that is key to the very success was their interconnectedness. Within an online channel such as Facebook, Twitter, WhatsApp, or even Telegram, it allows the protest spearheads to often keep each other contacted, and informed. It is worth emphasizing that the word “contact”, here, is not merely in a sense of “basic chit-chat communication”.

Au contraire, the word rather represents an activity of “intelligence-sharing”. A strong connection that loosely intertwined, region-wide, in the Asian pro-democratic activist movements is their strength and as well as their practical means to virtually transfer know-how from one to one another without hardship.

Take Hong Kong as a milestone example, when former Demosistö party’s secretary general Joshua Wong and his party members were threatened by the Chinese government, a Thai anti-establishment activist Netiwit Chotiphatphaisal, his die-hard fellow, was in no reluctant to call out, on their behalf.

Moreover, the two’s great companionship was also reflected via Chotiphatphaisal’s plan to translate ‘Vigil: Hong Kong on the Brink’ written by historian Jeffrey Wasserstrom from English to Thai. With the aim to raise awareness among Thai youths about the importance of democratic struggle.

In addition, one prominent case, that showed how Hong Kong’s political situation was never left unnoticed, was when the Thai protesters raised banners supporting the independence movement in Hong Kong during the past year’s anti-government rallies. It highlighted that geographical distance could not depreciate their ideological proximity.

This rationale would also be applied the same for Myanmar where the geographical context is not that of relevant. Fresh after the coup on February 1st, Thai activists are not hesitated to launch a rally supporting democracy in Myanmar. Again, they raised Myanmar’s flag and praised former state counsellor Aung San Suu Kyi as an aspiring icon in the same way to what they had done for Hong Kong and Taiwan.

The most recent case that should not be left out of consideration was the rally organized by the REDEM group in front of the 1st Infantry Regiment, Bangkok, at the end of February. What made it special was that not only the Thai activists group showed up, but also its Myanmar’s counterpart.

They made an appointment to hold rally together at the same day. Myanmar protesters did actually hold a rally alongside Thai protesters once again. To be precise, late last year Hong Kong protesters used to hold a demonstration in front of Hong Kong’s Royal Thai Consulate-General too, but it was quite in a group of small participants. Possibly lower than 20.

Although the event on Sunday was in really a loosened sense of assembly, there is still room for development. The authority, in Thailand, is beginning to believe that it could one day be escalated into a potential threat. Consider that there are more than a million of Myanmar citizens residing in Thailand, and they were holding demonstration almost every day at the UN regional office, Bangkok.

The average figure was between 200-300 participants daily, and some days were even higher than 500. It will definitely cause a true pain for the authority should both the Thai and Myanmar activists can call up a bigger collaboration and protest with/for each other, in the near future. The chance is quite likely.

Unlike Hong Kong or Taiwan, the geographical context for the MTA co-gatherings does not work for this case. On the opposite, it was the geographical proximity that encouraged migration from Myanmar to Thailand. Hence, there are more than enough human supplies if they were to call up a demonstration in the name of the MTA.

More importantly, it is noteworthy that it is not merely Myanmar migrants that are staying in Thailand. There are also a large number of Cambodian migrants. It is hard to deny the possibility that the Cambodians can be included in the MTA. Since Cambodians are facing the similar obstacles to Thai, Myanmar, Hong Kong, and Taiwanese people. What is disaster and a modern-day challenge for this is how the mainland Southeast Asians such as Thais, Cambodians, and Myanmar migrants holding a rally together collectively.

In short, lacking state authority does not mean that it is utterly powerless. It might not be of direct significant diplomatically. Yet it still has strong popular support with the most precious network of activists region-wide.

If this [MTA] trend continues to persist, it will encourage more protests in the future. And stronger collaborative demonstrations are to be expected, especially in the area that is a geographical intersection carrying more than two or more groups of citizens from MTA member-states.

Having more protests does not only generate more risk to stability or security but it will shake up the legitimacy of the authoritarians, and at the end, it would attract foreign sanctions if the authority accidentally made failure by using violence to cope with the opposite group.

The current real-world momentum is proving that the MTA is surely not anymore, a laughingstock for the authority. And it is more than ready to cause more annoying troubles to whoever holding the top job.

Thailand’s Generals and Royalist Elites Face Off with New Generation