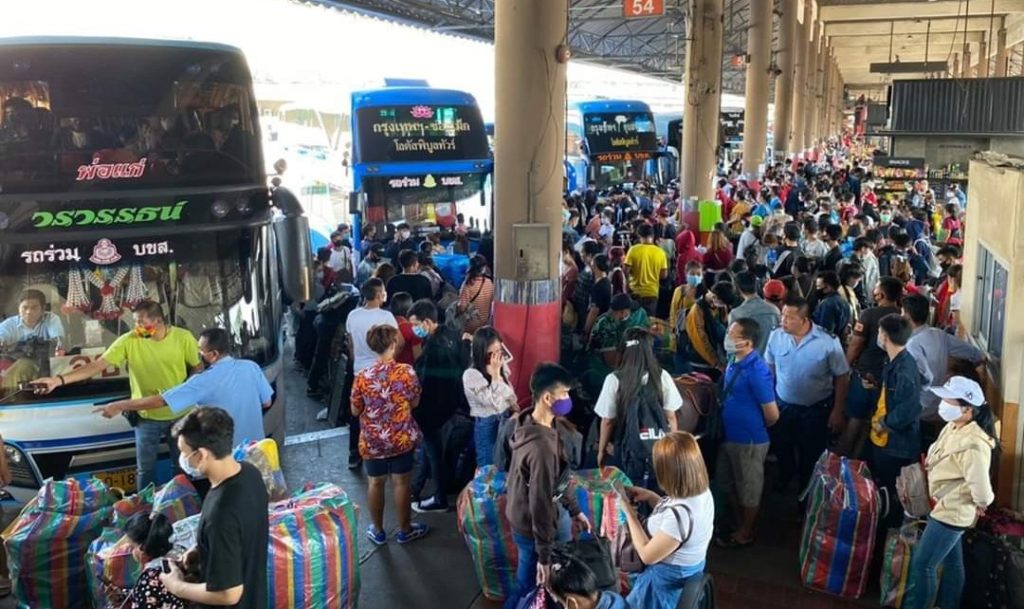 In the wake of the “Covid-19 lockdown” announcement for Bangkok thousands of people have flocked to bus stations to leave the city. The mass exodus is believed to be triggered by the closures of business in Bangkok and five other provinces.

The exodus comes after almost 200 new infections were reported on Sunday. The highest one-day jump to date bringing the total number of Covd-19 cases in Thailand to 599. The number of accumulated infections is also predicted to surpass 1,000 in the next seven days.

Eighty thousand people boarded buses heading out of Bangkok on Sunday. Mostly migrant workers rushed to bordering provinces aiming to go home to neighbouring countries. Above all before the Thai borders closed. At the same time, the Interior Ministry told provincial governors to keep an eye on people from Bangkok heading for their provinces. Amid fears they would further spread the disease.

On Sunday nearly 7000 Thai workers cued at the Mae Sai -Tachileik border in northern Thailand’s Chiang Rai Province to reenter Thailand before the border closed due to Covid-19 concerns.

Possible nationwide lockdown due to Covid-19

Meanwhile, Deputy Prime Minister Wissanu Krea-ngam said on Saturday the government had considered several measures to tackle the spread of the novel coronavirus. Including the possibility of a Nationwide lockdown.

He said whether these measures would be implemented depended on an evolving situation. He also noted that people “would be given a heads-up”. Saying a lockdown was highly sensitive and would have adverse impacts.

“The government has thought about it and we’re waiting for a signal from medical authorities,” Mr Wissanu said. “The prime minister is listening to opinions of medical and public health experts.”Still, the government will have to consider people’s safety as well as their convenience.” Mr Wissanu said

Following the closure orders by Bangkok and five other provinces, the national committee on communicable diseases has alerted provincial authorities to new arrivals. It also asked transport agencies to implement social distancing measures as people are expected to travel home.

In the letter to transport authorities, the national committee on communicable diseases stressed the need to screen passengers before boarding. Also to practice social distancing while away. And above all to clean and disinfect vehicles before and after the trips.