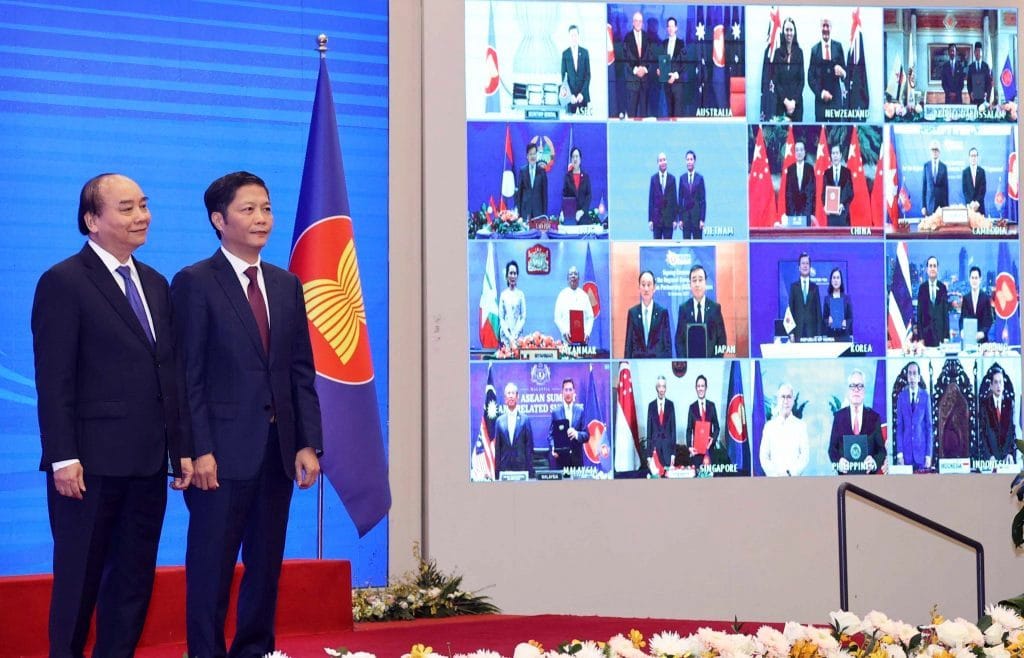 The Regional Comprehensive Economic Partnership (RCEP) was finally signed in November 2020, which involves the 10 ASEAN nations, as well as Australia, China, Japan, New Zealand, and South Korea. This is a very diverse mix of countries, with varying interests and priorities.

It is significant to note that China, Japan and South Korea have signed a single trade agreement together for the very first time. It would otherwise be an arduous task for the three countries to negotiate a trade agreement among themselves.

There were more than 30 sessions of negotiations, which took nearly a decade.

The deal will be the biggest Free Trade Agreement (FTA) ever signed and will cover 30% of the international gross domestic product and population.

The benefits from the RCEP would be clearly enjoyed by all members, given how comprehensive the RCEP is.

The RCEP will increase market access and remove tariffs on approximately 90% of goods traded, attracting more trade in the process, and advancing investment opportunities in Asia-Pacific. There would also be greater economic integration in the region.

The RCEP will allow firms to trade to any country in the bloc, not needing to adhere to different individual requirements of each country. This will greatly decrease trading and transaction costs, and time spent, and improve supply chain management.

For example, there is only a single rule of origin framework to adhere to, which will deal with all the RCEP member states. This would lead to a faster and greater flow of goods between the countries.

There would also be an increase in manufacturing activities and capabilities as manufacturing firms can operate in countries with lower labour costs.

Studies done by the Brookings Institution predicts that the RCEP will negate the losses suffered by RCEP members due to the US-China trade war.

The Brookings Institution also predicts that by 2030, the RCEP will contribute $500 billion to international trade.

The European Union have often emphasised about the importance of the Asia-Pacific region, which is likely to be the main driver of growth in the global economy for the next few decades.

Even though the European Union is not part of this deal, it will lead to more trading opportunities with ASEAN.

Goods and services in ASEAN

The RCEP deal is the first ever multilateral trade agreement China has signed and is a momentous geopolitical victory for China. It is very crucial in consolidating the superpower’s influence and soft power in Asia-Pacific, especially in Southeast Asia, where the region will be integrated more closely into China’s economic sphere.

According to DBS, from 2015 to 2019, China is the third biggest FDI investor in Southeast Asia, while promoting its Digital Silk Road and Belt & Road initiatives. With the RCEP, it would attract China to increase their FDI investment in Southeast Asia.

Also, consumer goods from China will become more competitive in countries such as Japan as tariffs are reduced.

The Trump Administration’s protectionist measures and America’s withdrawal from the Trans-Pacific Partnership has led to America’s declining involvement in economic cooperation globally, especially in Asia-Pacific.

The Americans should be concerned that the RCEP, the world’s biggest trade deal, is being signed without including the USA. Currently, America has to some extent, failed to counter China’s influence in Asia-Pacific.

Nevertheless, President-Elect Joe Biden is likely to prioritise ASEAN and the Asia-Pacific, and would look to expand America’s influence and involvement in economic partnerships.

It is worth noting the absence of India, where the Asian country was previously included in discussions for the RCEP.

The Indian government withdrew from the RCEP due to fears that the RCEP would pose a credible threat to the profits of domestic farmers and producers. Nevertheless, members of the RCEP remain receptive to India joining the RCEP in the future.

Chinese Premier Li Keqiang believes that the RCEP agreement further promotes the values and importance of free trade and multilateralism.

Asia-Pacific has continued to advance economic partnerships, during times when nationalistic sentiments and protectionist measures have grown in prevalence in the west.

Experts suggest that there would be long-term benefits of the RCEP deal, bringing investment and trade in Asia-Pacific to new heights, over the next few decades. Asia-Pacific will also be a more systematic and orderly trading area, similar to Europe and North America.

Ong Bo Yang is a Master of Science student at the University of Warwick, majoring in Programme and Project Management and have written 8 Op-Eds for 6 ASEAN newspapers, namely Thailand’s Bangkok Post, The Pattaya News, and Chiang Rai Times, Cambodia’s The Phnom Penh Post, Vietnam’s VnExpress, and Myanmar’s The Myanmar Times.