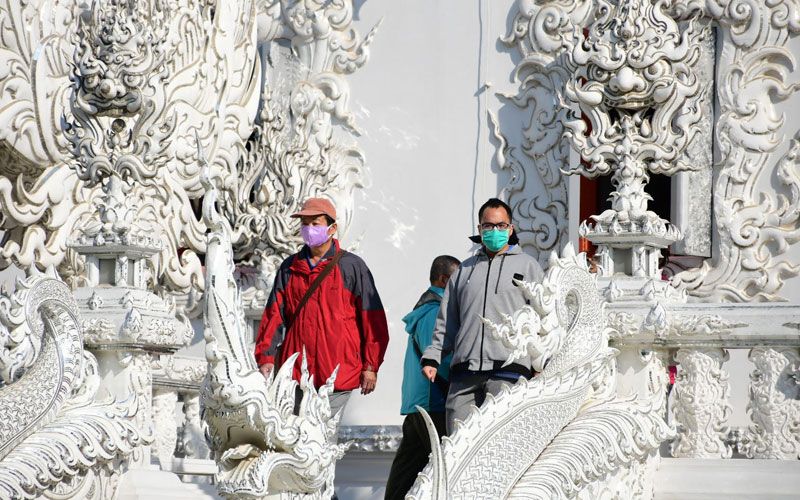 Thailand’s tourism authority reports the number of foreign tourists visiting northern Thailand may fall to its lowest in four years. Above all due to growing fears over the coronavirus outbreak in Thailand.

The fall in tourist numbers is due largely to fewer tourists from China, Thailand’s biggest source of visitors.

Visitor numbers in February slumped 40%, with a deeper contraction expected in March and April, according to TAT Governor Yuthasak Supasorn.

After a 2.5% rise in tourist arrivals in January, February’s figures likely slumped by 40%. A deeper decline is expected in March and April, TAT Governor Yuthasak Supasorn told Reuters.

April should be the weakest month, with tourist numbers likely tumbling 50-60%, he said.

“The Songkran Festival from April 13-15. this year is likely to be quiet,” Mr Yuthasak said. “People are also talking about zero water splashing over coronavirus concerns. Which will also dampen overall sentiment” the Minister said.

The Coronavirus outbreak impact is expected to last in Thailand for 5-6 months. He said numbers should turn positive from July. According to TaT, Thailand could lose as much as 500 billion baht in tourist revenue. Above all if there were no measures to support the industry, a key growth driver.

The government is planning “substantial” measures, including soft loans, to help tourism, according to Finance Minister Uttama Savanayana. The cabinet is expected to vote on the measures on Tuesday.

Tourism is crucial to Thailand as spending from foreign visitors amounted to 1.93 trillion baht last year. Which is about 11% of gross domestic product (GDP).

Cathay Pacific Parks Half its Fleet Due to Coronavirus