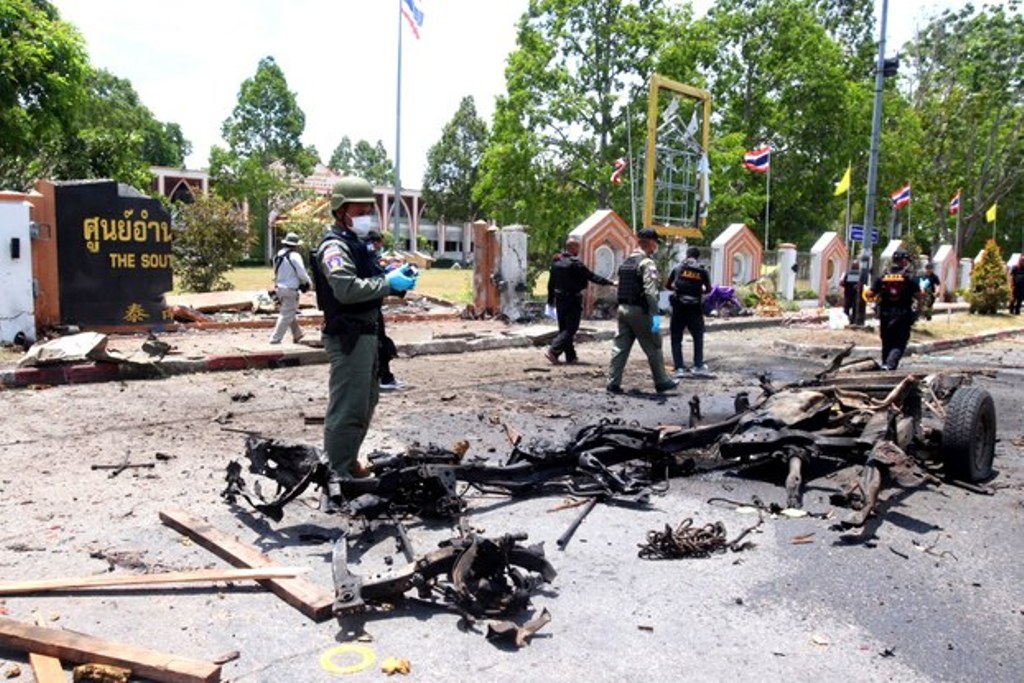 Posts on a Facebook page linked alleged supporters of the BRN, the largest armed group in the region, had appeared to warn of an imminent attack on Saturday. Pictures of the attack scene were later posted with the words “as promised.”

The attack occurred while officials were meeting at the Southern Border Province Administration (SBPAC) office. They were in Yala to discuss Malaysia’s decision to close its borders to contain the spread of coronavirus.

Attackers drew people to the spot by tossing a hand-held device into the yard of the building. Then remotely detonated a car bomb in front of the compound, said Pol. Col. Narawi Binwae-arong.

“While officials were meeting on COVID-19, two men on a motorcycle tossed a bomb over the fence. Later the car bomb was set off,” Narawi told reporters. “At least 25 were injured, including the deputy director of the SBPAC.”

“On a surveillance camera, we found a pickup truck carrying wood was parked at the site before the explosion,” he said. The driver left the scene with a man on a motorcycle, according to officials.

The road in front of the SBPAC office was filled with billowing smoke while injured police ran for safety.  Civilians, police, government workers and local reporters were among the injured.

“It was so scary, a loud bang. I could not imagine such a big explosion. There is no safe place, even at the SBPAC office,” a witness who asked not to be named for safety reasons told BenarNews.

The attack came on the heels of a days-long military operation on the border of Yala and Pattani provinces, where security forces have been pursuing a group of men they believe are responsible for killing 15 people in attacks on a village in Yala on Nov. 5, 2019.

Four members of the security forces have been injured since gun battles began on March 12.

On Saturday, a Facebook account that posts news about the Deep South conflict as well as videos and statements purportedly produced by the Barisan Revolusi Nasional, or BRN, appeared to reference the military operation and warn of an upcoming insurgent attack.

“Thanks people for sending us message after the operation took place. The BRN army will demonstrate our gratitude … the Thai army should prepare for what is going to happen at its position.”

After the attack Tuesday, the page posted photos of the bomb site with hashtags “as promised” in English and Malay.

A person with contacts inside the BRN who is not authorized to speak publicly on the matter said it was not an official platform for the group, but was run by some of its supporters.

Col. Pramote Prom-in, a spokesman for the military command in region, ISOC-4, condemned the attacks.

“The assailants wanted to massacre people by luring them out of the meeting room with a grenade. It was then exploded a car bomb.  The bomb was to add to the economic hardship amid COVID-19 threat,” Pramote said. “We shall condemn them widely.”

Thailand’s Deep South borders Malaysia and encompasses the predominantly Muslim and Malay-speaking provinces of Pattani; Narathiwat and Yala; as well as four districts in neighboring Songkhla.

More than 7,000 people have been killed in the region since insurgents renewed their campaign against Buddhist-majority Thailand 16 years ago.

The BRN is involved in peace talks with the Thai government, brokered by Malaysia. A round of meetings took place in Kuala Lumpur in early March, but violence continues almost daily in the southern border region.

Since the start of this year, 28 civilians and Thai security personnel have been killed and 32 others injured in violence in the Deep South. At least nine suspected Muslim fighters have been killed.

Expats Coming Together in Chiang Mai to Help Fellow Expats