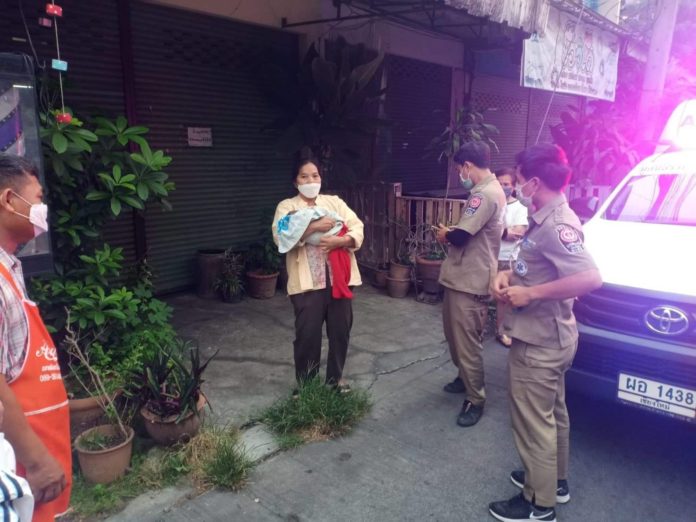 A newborn baby girl has been found abandoned outside a grilled pork stand in northern Thailand’s Chiang Mai Province early yesterday, March 29. The baby girl was discovered by a drunk man on Soi Marakoi at 6:30 a.m.

The newborn was found wrapped in a red towel and was quickly taken to Maharaj Nakorn Chiang Mai Hospital. The baby girl was found to be in good health, hospital staff told Thai media.

Officers from the local police station said there were no witnesses to the baby girl being abandoned. Police are checking CCTV camera footage in an attempt to identify the child’s mother.

Abandonment of Children and Babies

Thai society has historically had a problem with abandonment of children. Abandonment stems from many problems, including; undesired pregnancies out of wedlock; family problems and more.

Parents who abandon a bay do have other options. There are governments and private sponsored faculties for children who need care. However, many parents do not use these services and the children end up on the street.

Parents who abandon children are committing an offense under Thai criminals law. The Thailand law sates as follows:

Whoever, abandons a child not over nine years of age in any place, with intent to wholly abandon such child in a manner so that such child shall be without a person to take care of, shall be punished with imprisonment not exceeding three years or fined not exceeding six thousand Baht, or both.

Whoever, to have the duty according to the law or the have the contract taking care of the person in the helpless condition through age, because of sickness, infirmity in body or mind, abandoning such person in the manner likely to endanger his or her life, shall be imprisoned out of three years or fined not out of six thousand Baht, or both.

If the commission of the offence according to Section 306 or Section 307 causes death or grievous bodily harm to the abandoned person, the offender shall be punished as provided in Section 290, Section 297 or Section 298.

Section 25: Guardians of a child are forbidden to act as follows:

(1) Abandon a child at a nursery or health care facility, or with a person employed to look after the child, or at a public place or any other place, with the intention of not taking him or her back;

(2) Neglect a child at any place without arranging for appropriate safety protection or care;

(3) Deliberately or neglectfully withhold from a child things that are necessary for sustaining the child’s life or health, to an extent which seems likely to cause physical or mental harm to the child;

Under the provisions of other laws, regardless of a child’s consent, a person is forbidden to act as follows: (2) Intentionally or neglectfully withhold things that are necessary for sustaining the life or health of a child under guardianship, to the extent which would be likely to cause physical or mental harm to the child ;