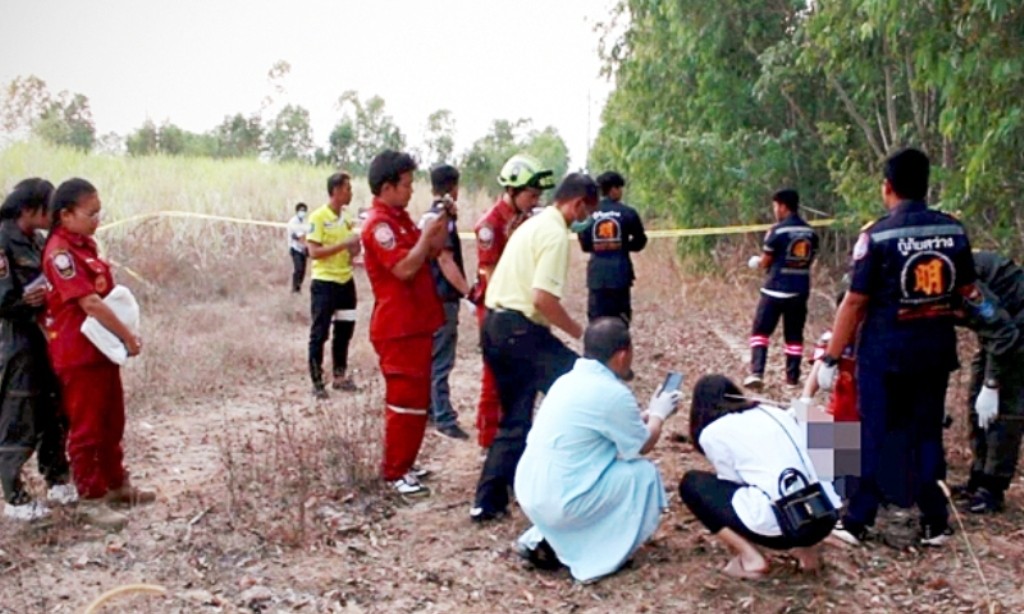 Authorities in northeastern Thailand have reported the discovery the corpse on a naked male aged 30 – 40 years old.
The corpse was found decomposing in a sugarcane plantation in Udon Thani.

A joint team of police officers, medical personnel from the Thung Fon Hospital and rescue volunteers was dispatched to the scene.

A naked male body, described as “turning black and bony” and aged between 30 – 40 years old. It decomposing corpse was found lying on the ground. There was no evidence that could help police identify the deceased man.

The sugarcane farmer, said he detected a foul smell while harvesting sugarcane and decided to search the area. He then came across what looked like a corpse and called the police.

Police said the cause of death has yet to be established since the body has been decomposing for at least two weeks. Due to the decomposition its left police little to work on.

The body was sent to Thung Fon Hospital while police began an investigation.

Meanwhile, a man and a woman linked to a major drug bust in the northern province of Phayao have been arrested. Office of the Narcotics Suppression Board (ONCB) secretary-general Niyom Termsrisuk reported their arrest on Wednesday.

In September 2018, authorities intercepted two vehicles – an ambulance and a rescue-unit pickup in Phayao. They seized 398 kilograms of crystal meth and 81kg of ketamine.

Seven suspects were arrested, but they were found to be only hired couriers. Following an expanded investigation, court arrest warrants were obtained for Mr Phayao and Ms Sureerat.

During the investigation, it was learned that Mr Phayao was about to smuggle a large quantity of crystal meth into the country. This led to the seizure of about 1,500kg of ice and the arrest of one suspect at a warehouse in Pathum Thani province last year.

The on-going investigation then led to the arrest of Mr Phayao and Ms Sureerat on Jan 15, said Mr Niyom.