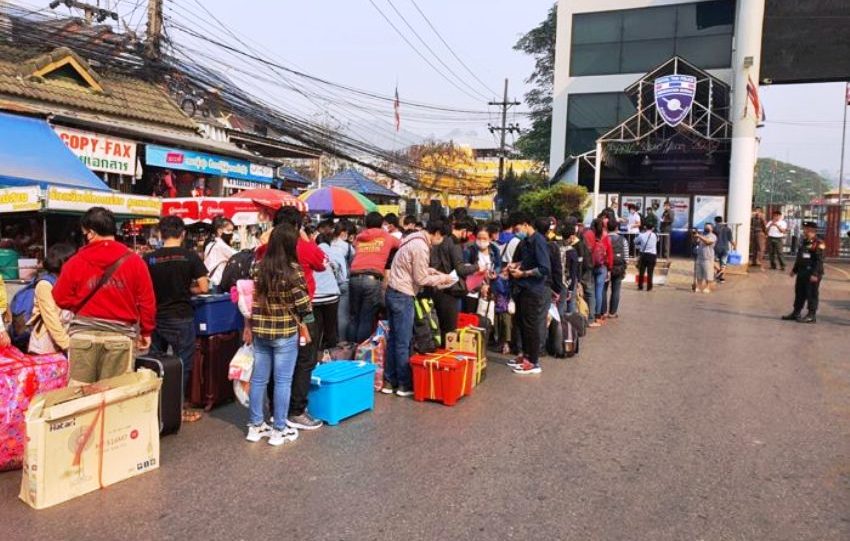 The Thai government’s temporary ban on cross-border travel between Thailand and neighbouring countries has failed due to floods of migrant workers. Thailand was forced to reopen closed crossings to allow huge numbers of migrant workers gathered at checkpoints to cross. The borders were re-opened out of fear of riots from migrant workers.

In Chiang Rai, the border was reopened after a group of about 100 workers from Myanmar arrived at the Mae Sai checkpoint.  They arrived only to find the border had been closed.

“We must go home, or we will starve to death in Bangkok,” said a 28-year-old woman in the group. She was recently laid-off due to the shutdown in Bangkok.

Their insistence forced the governor and immigration officials to grant them exemptions and allowed them to cross the border into Tachileik, Myanmar.

In Mae Sot more than 4,200 Myanmar workers were allowed to cross back into their country through the checkpoint.

Meanwhile, the atmosphere was tense at Sa Kaeo’s Aranyaprathet checkpoint near Cambodia. Police had to prevent more than 400 Cambodian workers from protesting against the border closure.

The situation eased after Thai and Cambodian authorities decided to reopen the border temporarily.

A bus terminal in the Nakhon Phanom Municipality was also packed with stranded migrant workers from Laos and Vietnam. They were later allowed to pass over the 3rd Thai-Lao Friendship Bridge into Laos.

Meanwhile, Thai workers returning home from Bangkok are being told to go into 14-day self-isolation.

Checkpoints across the southern border with Malaysia have also been closed. Although Malaysia had already ordered its borders closed earlier, following reports of Covid-19 cases linked to a mosque event in Kuala Lumpur this month.

Malaysia’s nationwide lockdown has also driven Thai workers to return home. However, sources said, many failed to comply with the quarantine requirement, the Bangkok Post reports.

Most of the migrants worked in Bangkok, but decided to leave after the Bangkok Metropolitan Administration ordered businesses — including shopping malls — to close until April 12. The closure is part of its effort to urge the public to stay home during the outbreak.

Under the closure order, only supermarkets and food retailers at other markets are allowed to open, and restaurants can only offer take-outs to its patrons. According to Bangkok Metropolitan Administration estimates, about 90% of those who left Bangkok over the weekend were migrant workers