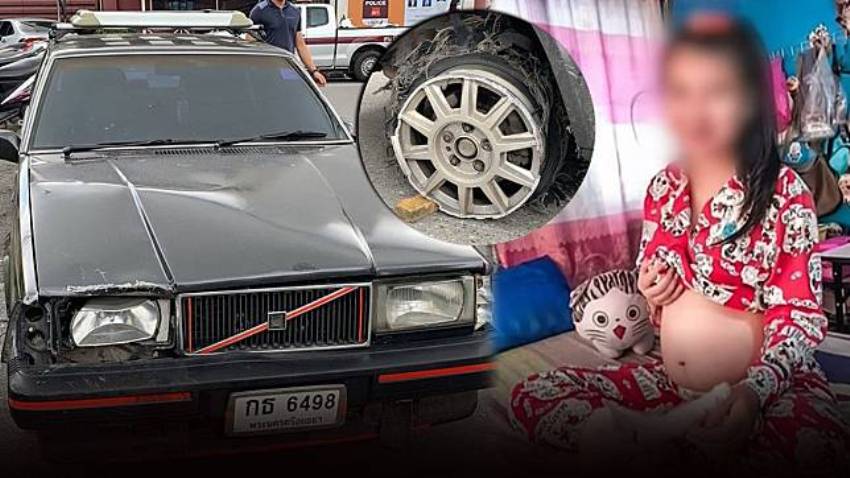 Police in Bangkok have launched a manhunt for the driver of a black Volvo who ran over and killed a five-month pregnant woman on Sunday.

The pregnant woman was on a motorcycle with her boyfriend when it was hit from behind by the Volvo. The victim slid off the motorcycle upon impact and was crushed to death when the Volvo sped off.

Residents and emergency workers rushed the pregnant woman to hospital, where she and her unborn child were pronounced dead hours later.

CCTV images show the Volvo stopped 8 kilometres from the accident site. The driver got out and waved down a taxi.

Bangkok Police have seized the Volvo and sent it to the Forensics Department for examination.

Investigators have found that the Volvo initially belonged to a woman, who sold it to a man in 2016. The man died in 2019, leaving the car to his girlfriend. She claims the Volvo was stolen by her dead partners friend. Meanwhile, Police in eastern Thailand report that a crane truck operator has been killed after  his 25 ton crane toppled into a roadside ditch. The drive drowned as he was trapped inside the operating cabin.

Mr. Thanakorn Boonsri was driving the crane back to the company compound after finishing work. The weight of the crane caused the edge of the road to subside, police said.

The crane toppled into the deep ditch alongside the road, which held a lot of water. The cabin was submerged, and Thanakorn was trapped inside it.

Rescuers from a charity foundation soon arrived, but were unable to extricate the driver and save his life.

They had to call for another crane to lift the partially submerged crane from the ditch.

Thanakorn was taken from the cabin about an hour afterward, but it was too late for him.