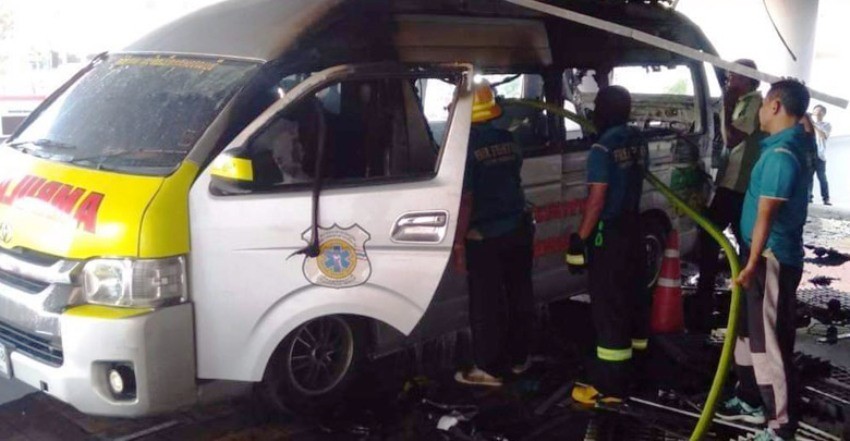 An ambulance has caught on fire then exploded while at the Chaophraya Yommarat Hospital in Suphan Buri Province in central Thailand. As the Ambulance exploded people and staff ran for their lives. Luckily no one was injured in the incident.

Firefighting officials were notification of an ambulance that exploded at a hospital in front of the Heart Disease building. Officials from fire station and officials from the Central Police Forensic Science went to inspect the area right away.

Upon arrival they found an ambulance on fire in front of the Heart Disease building at the hospital. Firefighters worked to put out the flames and after 15 minutes they were able to stop the fire.

Patients and medical personnel nearby managed to run away from the flames and no one was injured.  Many at the hospital were shocked as the hospital was the places they expect to witness an explosion. According to Thai Residents the driver filled the oxygen tank and drove to the heart Disease building to pick up a patient. While the team was moving the patient to the ambulance the vehicle suddenly exploded.

Black smoke filled the area and the ambulance burst into flames. The ambulance team managed to move the patient out from the area in time.

The patient was almost inside the ambulance when it exploded, if the incident took place even seconds later, the team members and the patient would have definitely been injured, the driver said.