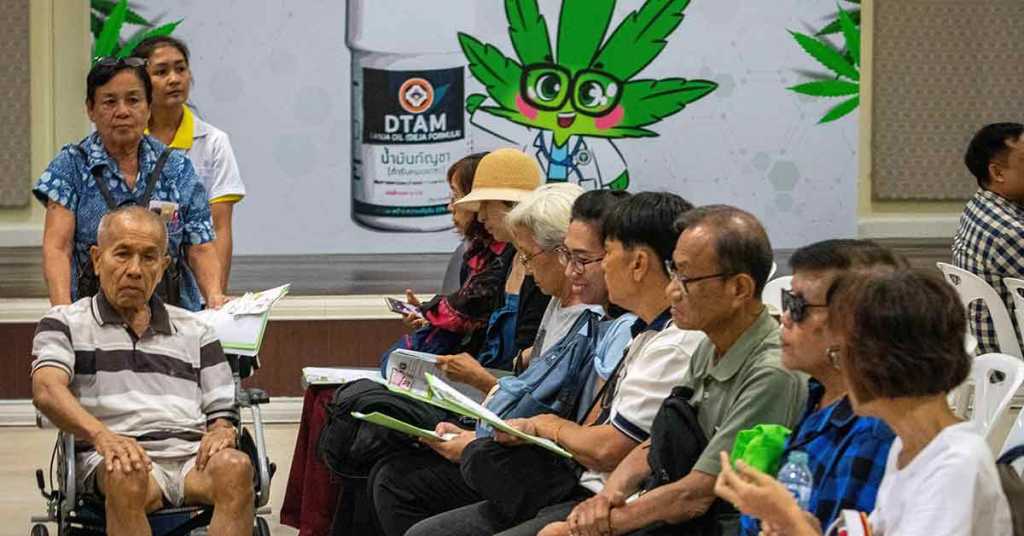 Patients wait to register for cannabidiol (CBD) oil treatment during the opening of a cannabis (marijuana) clinic at the Department of Development of Thai Traditional and Alternative Medicine in Bangkok on 6 January, 2020
SHARE

Thailand’s first medical marijuana clinic is bustling with patients just 10 days after it opened in Bangkok. With more than 4,000 seeing the doctor and 12,000 people seeking appointments until March.

Public Health Minister Anutin Charnvirakul said many were interested in marijuana treatment, after he visited the marijuana-based clinic which is run under the supervision of the Health Minister.

The clinic has already seen 4,639 patients in 10 days. Many booked their appointments in advance through the Dr. Ganja phone app.

The clinic has dispensed  over 8,000 Cannabis CBD oil to patients who really need it, Asia One reports.

Many of the patients came to treat insomnia, migraine disorders, pain in the joints and back pain among others.

Meanwhile, the Health Minister also announced the opening of the first marijuana clinic in northern Thailand. The clinic in Chiang Mai will offer cannabis-based treatments for diseases, including Parkinson’s.

The clinic has 125 medical staff, including 39 doctors and four traditional Thai medicine practitioners. Even more at least five groups of illnesses can be cured, or relieved, by marijuana extracts,” he said.

The clinic will also be one of 37 under the fourth phase of cannabis-based medical service expansion.

Thailand Confirms Second Case of Coronavirus from China
Next Article