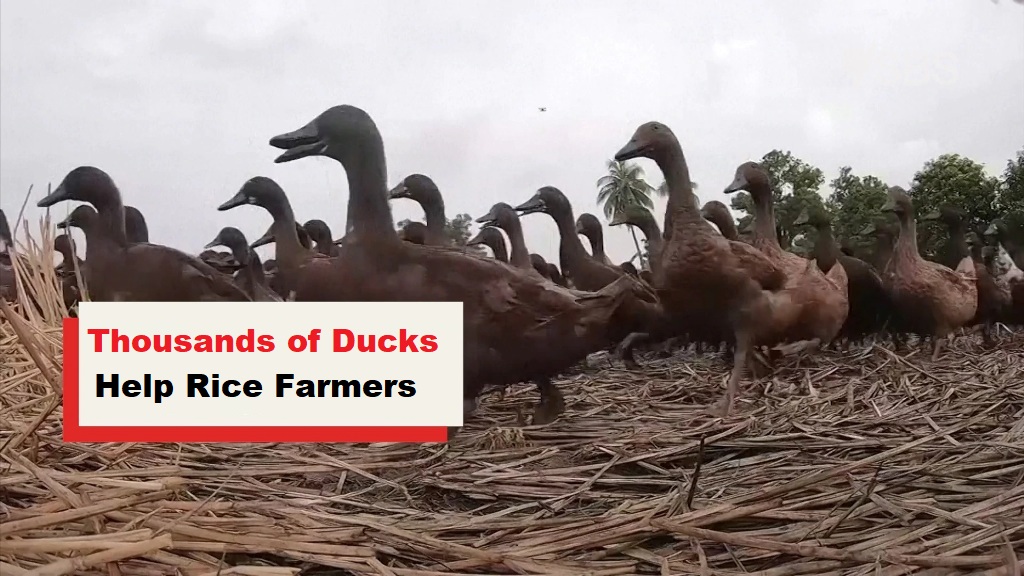 Thousands of ducks have been set loose in rice paddies in Thailand for a regular clean-up that benefits rice and duck farmers alike. Drone footage captured the event in Nakhon Pathom, about an hour west of Bangkok, where 10,000 ducks stormed the flooded fields to devour pests such as snails hiding in the freshly harvested rice stubble.

The release of the Khaki Campbell ducks, a British breed, is part of “ped lai thoong” — a long-standing tradition in the region.

The deal rids the farms of pests — such as cherry snails, apple snails, weeds and other small pests — while providing a rich source of nutrients for the water birds.

From just 20 days old, the ducks roam the region’s paddies for about five months before being mustered back to the duck farm to produce eggs for up to three years.

“The benefit (for the breeder) is that we reduce costs to feed the ducks,” said Apiwat Chalermklin, 34, a breeder who took over the business from his father.

“And in return, for the rice farmers the ducks help eat pests from the farm and the farmers can reduce the use of chemicals and pesticides.”

Mr Apiwat has four flocks that move around different rice fields in the province where farmers typically cultivate three rice crops every year.

The birds can clean a 70-hectare farm in about a week.

“They help eat golden apple snails and the remains of unwanted rice husks that remain in the field from the last harvest,” rice farmer Prang Sipipat said.

“The ducks also step on the rice stubble to flatten the ground and that makes it easier to plough.”

Thailand is also the world’s second-biggest rice exporter and has been facing a prolonged drought.