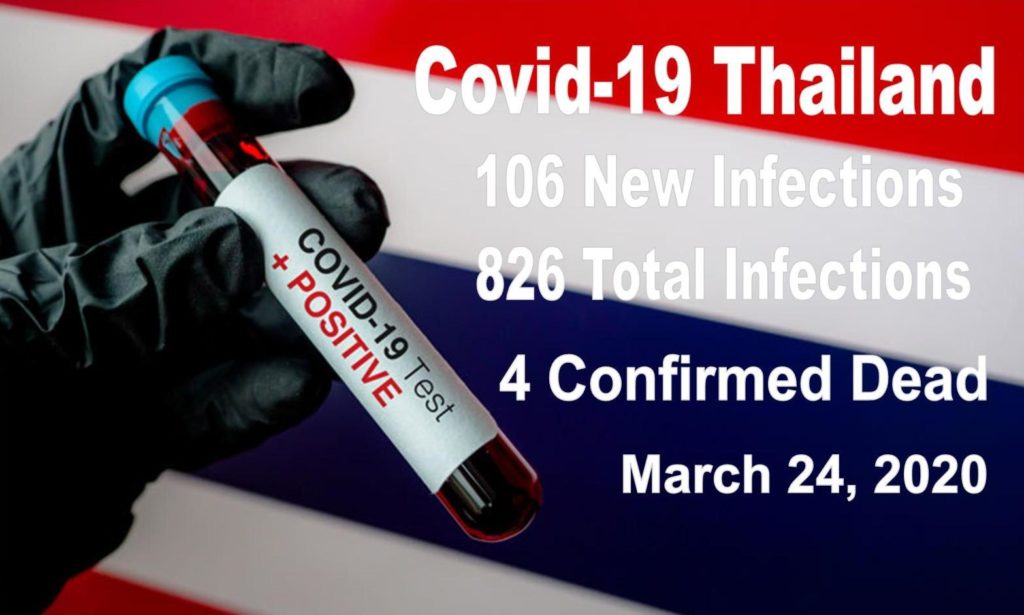 The number of new confirmed cases was lower than the 122 recorded on Monday.

Since the start of the outbreak, 57 Covid-19 patients have recovered and gone home, while 766 Covid-19 are still being treated in hospitals. The cabinet was meeting to discuss additional measures to cope with the coronavirus pandemic later today.

Meanwhile, a South Korean man has been caught after ignoring the covid-19 self-isolation after arriving in Thailand. Instead went shopping in Buri Ram with his wife, governor Thatchakorn Hathathayakul said.

Mr Thatchakorn said that the provincial public health office was informed by residents of a Housing Estate in Buri Ram Municipality. They said that a Korean man staying at an apartment and had failed to comply with the 14-day self-isolation requirement. Health officials, assisted by immigration police, quickly found him his apartment.

The 46-year-old Korean arrived at Suvarnabhumi airport from South Korea on March 19. He went to Pattaya, rented a car and stayed overnight in Bang Lamung district, Chon Buri. On March 20, he left Pattaya in the rented car, arrived in Buri Ram.

According to Thai media he was seen leaving the apartment with his wife to visit many places. On March 22, they went to a public park, but he did not get out of the car.

He was told the must immediately go into self-isolation for 14 days, starting on Tuesday.

According to immigration police, his wife also violated the law by providing shelter for a foreigner without informing the authorities. She was liable to a fine of up to 1,600 baht.

The governor said people people must obey the self-isolation requirement.

Local leaders had been instructed to keep track of people returning from Bangkok and other Central provinces. Furthermore to make sure they isolate themselves for 14 days. Above all to prevent the coronavirus spreading to members of their family and the local community.