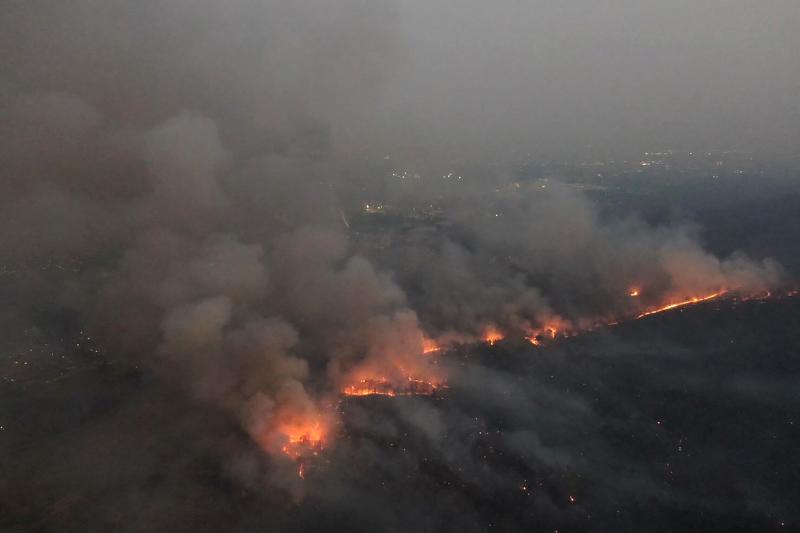 “To some it seems that we are doing nothing. But we have sent thousands of people to help firefighters in the north. However, the areas in which they are operating in are so large,” Mr Varawut said. Helicopters from the Environment Ministry and those commandeered from the army and Interior Ministry have been dropping water on fires, while drones were being used to detect new blazes, he said.

Most of the bushfires in Doi Suthep-Pui National Park had been put out yesterday. Chiang Mai provincial governor Charoenrit Sanguansat said almost all bushfires in the park had been doused with water dropped by helicopters.

He said park fires on Doi Pha Dam and others in tambon Ban Pong in Hang Dong district which had raged for a week have been brought under control.

Wutthichai Somwipat, the park chief, said the fire was hard to subdue because combustible material such as dead leaves had built up over several years and strong winds fanned flames across fire breaks.

Air quality continues to to worsen in Chiang Mai Singer Note Panayanggool said the chronic air pollution was affecting her and her family health wise.

“We staying in our home to fight Covid-19. But we think it could be air quality that kills us,”she wrote on her Facebook page.

She said several family members were suffering from eye irritation and blurred vision and her newborn niece was also sick. She added that the ailments were likely caused by fine dust.

Fine particulate readings from 17 detector stations across the northern provinces have recorded extremely high pollution levels. According to Pralong Dumrongthai, director-general of the Pollution Control Department.

Two stations were located in Chiang Rai; five in Chiang Mai; two in Nan; one in Phayao; four in Lampang and three in Phrae, Uttaradit and Mae Hong Son.