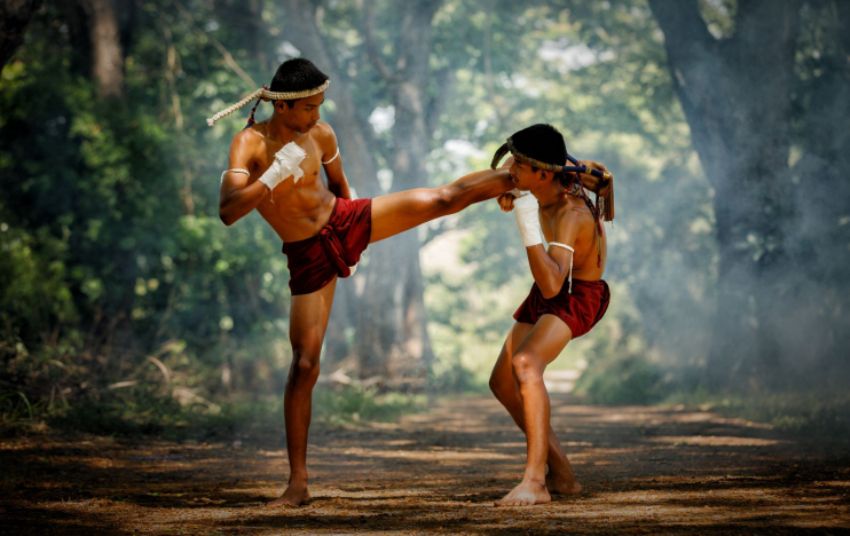 Muay Thai history traces its origins back to the early days of migration when Thailand’s major tribes moved from China and traveled through neighboring Vietnam, Laos, and Cambodia. As these Siamese tribes made their way across the land, they were resisted by other tribes. Carrying no weapons, they ingeniously developed a “fighting-style”, skilled hand-to-hand combat. The basic rule was to “fight or die”.

The Siamese settlements eventually became a kingdom. In 1238, with increasing attacks from neighboring kingdoms, a Thai army was formed in the city of Sukothai. Hand-to-hand combat was taught to the soldiers. Weapons training and the use of one’s body to be a weapon were also taught. They didn’t have Muay Thai shin guards for training back then.

Training camps were set up throughout the kingdom, including at Buddhist temples to train the youth. Even theRoyal household and the upper-class undertook training, strongly believing that Muay Thai training was necessary for the kingdom’s future rulers. So, KingPhokhun Sri, Sukothai’s first monarch brought his two sons to a training center.

With continuing threats on the kingdom, a larger Thai army was formed and Muay Thai training became included in military training.

Muay Thai is the martial art of the Thai people. This close-combat sportuses the entire body as a weapon. The weapons used are eight points in the body. The hands serve as his sword and dagger. Shins and forearms act as armor to protect against blows. Elbows serve as a club to hit opponents. Finally, legs and knees act as an ax and staff.

The blows by the parts of the body are coordinated. For instance, elbows and knees were tested where they could hit the opponent; at the same time, they would seize the opponent to make them fall and receive the blows.

Exploring the history of Muay Thai shows that it was a favorite sport of Royalty. King Naresuan who ruled in 1590 to 1605, and freed the kingdom of Ayutthaya from the Burmese invaders, devoted efforts to have Muay Thai widely recognized as a sport.

The rule of King PrachaoSua in 1702-1709 was known as the “Tiger King” era. The King often entered and won matches as a commoner. In one instance, he defeated two local champions in successive matches and won two baht as his prize. As a rule, he fought incognito; otherwise no one would challenge their king.

In 1788, King Rama I received a challenge from two French brothers traveling in Southeast Asia to wager and fight different combat styles. One brother had a reputation as a winner fighter. King Rama I called on the captain of the palace guard, a Thai fighter, The fight was staged in the Emerald Buddha Temple, of the King’s Palace.. With a big cash prize for the winner.

Initially, the stronger Frenchman had the upper hand, but he could not sustain his strength against the more punishing blows of his Thai opponent. His brother entered the ring, violating the rules. There was a minor riot. In the end, no one could dampen the pride of the Thais in their martial art.

King Rama V, who ruled in 1868-1910, paved the way for a golden age for Muay Thai. Annual tournaments were held; boxing centers built throughout the kingdom. Muay Thai instruction was integrated into the curriculum for military cadet teachers.
International exposure

The history of this martial arts skills set brings it to international shores during World War II, when Thai soldiers who served overseas, practiced their Muay Thai skills and foreign servicemen watched and became fans of what they called “Siam Boxing”. It has now accelerated as one of today’s most taught martial arts in Europe and the US.

In 1930, rules were set for the sport. As major stadiums were built in major cities such as Bangkok and Chiang Mai.Lumpinee Stadium in Bangkokis considered the“holy ground” to Muay Thai fighters and that officially opened in 1956.

Since the sport has developed, regulations now render it as a “safe ring sport”. Some of the rules can be seen in the points below.

The International Executive Olympic committee, in December 2016, voted to recognize MuayThai to be in the Olympics within a 3-year period. Furthermore the International Federation of MuayThai Association (IFMA) is commissioned to regulate Muay Thai as a world sport. It is recognized as a fitness form,for aerobics, and it is a self-defense program too. Now, Muay Thai skills are recognized around the world by martial arts fighters and submission fighters as included in the framework of all-round fighting. The sport has come a long way indeed, and now people participating in MuayThai can also hold their heads high when undertaking this worldwide sport.