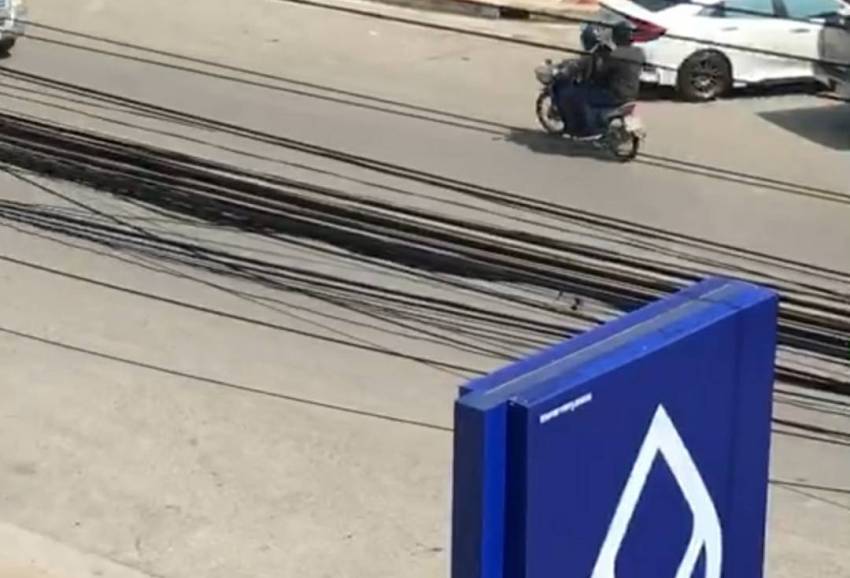 Chiang Rai Police in Chiang Saen district are for searching two men who staged an armed robbery outside a Bangkok bank Monday morning. The pair road off with over a Million baht in cash.

Dressed in black and wearing motorbike helmets, the thieves managed to grab Bt1.05 million in cash before fleeing on a motorcycle.  Police Lt. Colonel Saman Samarn, the Chief Inspector of the Immigration Bureau in Chiang Saen was first to arrive on the scene. She told Police Lt. Colonel Saman the cooperative made regular cash withdrawals from different banks in the area. Always in a similar fashion, but in different Bangkok bank locations.

Mrs Watcharin said she had placed the money in the console of her vehicle when there was a knock on her window.

She opened the the passenger window and a man leaned and pointed a hand gun at her and demanded the cash. He also warned her not to make a scene or follow him or he’d kill her. The man then ran to the back of her vehicle where he rode of with another man on a motorcycle.

The Bangkok Bank Manager, Mr Chaiwat, also helped police in gathering information from a distressed employee who witnessed the robbery. Mr Thanakon the employee said he had handed the money over to the woman. He said he then saw the motorcycle with the helmeted robbers pull up and also leave the scene.

Meanwhile, Chiang Saen Police, Police Lt. Colonel Saksak Pimolthip, told Thai media that he is confident they would know the identify the thieves very soon. He said he had ordered patrols to try to locate the motorcycle used in the robbery. Witnesses to the robbery said the motorcycle turned into an alleyway not long after taking off from the  crime scene.