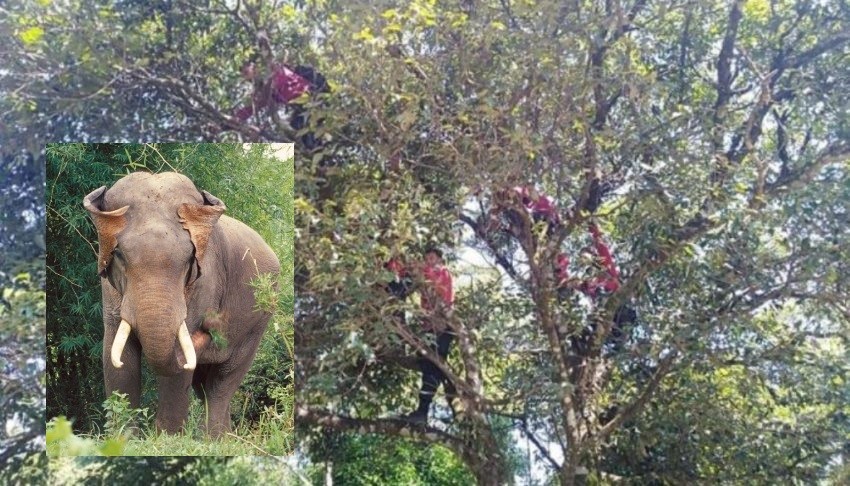 A group of firefighters in northern Thailand were forced into climbing a tree to escape a heard of wild elephants they stumbled upon. The firefighters were fighting forest fires in Omkoi district of Chiang Mai Province.

The firefighters said they were in the area patrolling for fires when they came across a small herd of wild elephants. Fearing for their safety, the fled up a nearby tree and stayed there until the elephants departed.

Omkoi, in the south of Chiang Mai Province, is the home of the Omkoi Wildlife Sanctuary. The sanctuary has a number of rare and endangered species including Wild Asian elephants. That said, stumbling across wild elephants in the park is not that common as it has a small population.

The firefighters were in the area as part of efforts to combat burning across the province. Many villagers start the fires to improve the annual mushroom harvests.

Meanwhile, two men have been arrested in relation to fires that have caused widespread damage in Doi Suthep-Pui National Park. The two men are alleged to have started a fire in a forest area in Ban Thung Pong Tai, Moo 9 Ban Pong in Hang Dong District.

The men admitted to starting the fire but claimed that they had only been trying to burn a fire protection line. Above all to provide protection from other fires in the park but their fire subsequently got out of control.

They were charged with “constructing a forest clearing or burning a forest or by any other means causing damage to the condition of a forest and national park. ”

In Mae Chaem of Chiang Mai, the district chief ordered an investigation after reports from villagers of a fire in the Pa Baan Tuan area. On arrival officials found a man standing in the area with a lighter in his hand.

Suspecting him of starting the fire, he was taken into custody. Consequently he later told authorities that he was taking a short cut home when he saw an excess of leaves and branches. Allegedly he thought he would get rid of them by lighting a fire which got out of hand. The hed pho, a small, bulbous black mushroom only grows only during the dry season in Northern Thailand.

Locating the prized fungus is a difficult but highly lucrative endeavour. Some villages can earn as much as a million baht from a single season.

The mushrooms grow on the forest floor and are difficult to spot beneath the thick layer of dried leaves. The easiest way to find them is to simply set fire to the undergrowth. While harvesting the mushrooms only requires burning a small patch of land, fires can easily grow out of control.

Mushroom foragers don’t report the fires, as doing so would lead to their arrest.

Besides the million-baht mushroom, many villagers believe that fire can help stimulate the growth of certain types of vegetables. such as pak wan or star gooseberry, bamboo shoots and other mushroom varieties.