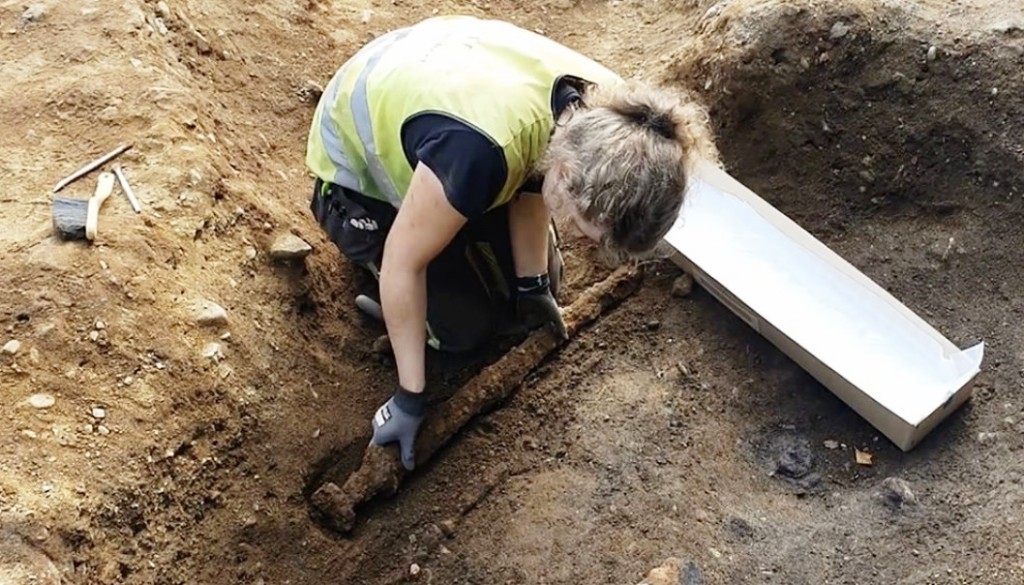 One of the most interesting peoples of antiquity, of course, are the Vikings – sailors who lived in the territory of modern Denmark, Norway and Sweden. Much is known about their lives, but their ritual burials still puzzle historians from all over the world. It is known that the strong soldiers who died in battle were buried inside the funeral boats together with weapons, jewels and animals.

Norwegian archaeologists during field work in the central part of the country excavated a grave about 1,100 years old, in which rested a Viking warrior, buried with all his weapons.

The discovery is reported on the website of the Norwegian University of Science and Technology (NTNU). Researchers write that in the grave rests a man who died around the 800-900 AD. His grave was found near the historic village, which today bears the name of Vinjeøra. It is located south of Trøndelag County.

The man was buried with a full set of weapons: an axe, a spear, a shield and a sword. It says a lot about the status of the buried. First, as archaeologists have established, this man was a free man and a farmer. Second, he was a warrior. In the Vikings and early Middle Ages, most warriors were free people with their own farms.

Raymond Sauvage who is an archaeologist of NTNU declared that medieval law required a farmer to purchase weapons. “At first he was obliged to buy an axe and a shield, and eventually he could also buy a spear and a sword.

According to him, it is the sword that makes this grave special. It’s not even about his good safety. The sword was laid on the left side, although earlier in similar graves swords were always found on the right side of the deceased.

It goes without a question how popular Vikings are in Scandinavia and Norway. They are depicted almost everywhere – literature, cinematography, sports. They are a part of culture and this discovery was also very astounding for the citizens in Norway. Such discoveries often happen and they are used really well by companies including the gambling industry. Supposedly https://nyecasino.casino/ decided to use this info as a promotional tool and include it on its website.

A warrior thought to be left-handed

This discovery led scientists to believe that the warrior was left-handed. Although in this respect the burial practice of the Vikings looks a little strange. It would seem that for right-handers the sword is more convenient to lay just on the left, so that the warrior could freely snatch it with his right hand. However, these weapons have always been laid on the right. In this case, the ritual was broken.

“While for us it is a mystery: why are swords almost always put on the right side? Sauvage says. – According to one theory, the underground worlds in which the Vikings fell after death are a mirror image of the upper world. Maybe this warrior was left-handed, which was taken into account when he was wired into the afterlife? It’s hard to say.”

By the way, the grave of the alleged left-handed warrior partially blocked the graves of three other soldiers buried in a ditch. It surrounded one of the big mounds. These people clearly did not enjoy much respect and respect. In addition, in ancient times burials were often used several times.

Also in the same place archaeologists found a fourth tomb, which surprised them. In it was buried, probably, a woman who was cremated either in the early stages of the Viking era, or before it. In this burial were found burial gifts – well-preserved beads, oval brooch and scissors. It was on these artefacts and was determined the sex of the buried person.

Not a first discovery

It is not the first time archaeologists have discovered the graves of Vikings. In November there was also another one. Archaeologists also managed to find mysterious “houses of the dead” that could also serve as a grave for dead people. This discovery was also made by archaeologists from the Norwegian University of Science and Technology. It consisted of two burial boats, which lay the bodies of a man and a woman from different ages. Why could they be buried together?

The mysterious tomb was discovered in the village located in central Norway. The remains of a boat 7 to 8 metres long were found in it, which was embedded in a larger swimming facility up to 10 metres long. A woman who died in the second half of the 9th century was buried in a small boat in jewellery, and with her were put craft tools and a cow’s head. An 8th-century man was buried in a large boat, and a shield, a sword and a spear lay next to it.

It was in awful condition, because the wooden boats almost rotted and all that was left of them – it was used in their construction of iron nails. Scientists were able to recognize the presence of two boats only due to the location of the preserved materials.

Archaeologists also speculated about a relationship between a man and a woman. They may have been buried together to leave the family’s right to own a certain piece of land. In Viking times, no written documents were out of the question, so they had to look for different ways to prove that the family had owned the land for five generations or more.

At the moment, archaeologists in Norway are trying to study the DNA of the buried Vikings. Thanks to the analysis, they will be able to determine their activities, diet and even recreate their portrait. This is indeed possible, as recently researchers from the University of Dundee in Scotland were able to recreate the appearance of a Viking woman who died 1,000 years ago.