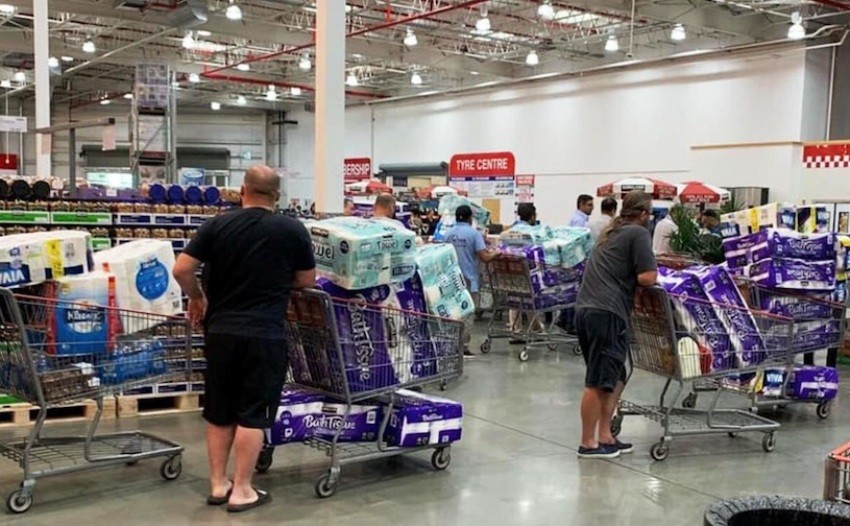 As Coronavirus fears spread across the world, people have been rushing to grocery stores to hoard dry goods. However in Australia shoppers seem to be more concerned about having a clean bottom. Australians are instead racing to grocery chains to buy and hoard toilet paper, not dry goods.

Australia’s biggest grocery chain Woolworths has had to put limits on purchases of toilet paper amid “panic buying.”

The buying panic comes after Australians posted photos on social media in recent days showing empty supermarket shelves. With shoppers pushing trolleys loaded with toilet paper. Prompting the prime minister to tell citizens he had been assured by the main grocery chains they could meet any spike in demand for toilet paper.

The rush on Australian toilet paper, which is largely made domestically, has not been explained. It appears to be at odds with stockpiling of long-lasting dry goods like in Thailand.

The Australian governments has also impose travel restrictions to slow the spread of the illness, Reuters reports.

The hashtags #toiletpapergate and #toiletpapercrisis were trending on Twitter in Australia

Furthermore Woolworths said in a statement on Wednesday that it was introducing a limit of four packs of toilet paper per shopper. Including online shoppers, to ensure every customer had access to the products.

“It will help shore up stock levels as suppliers ramp up local production and deliveries in response to higher than usual demand,” the statement said.

It also added that most Woolworths toilet paper remained available.

The country manager for Costco, Patrick Noone, said the membership-based discounter had put an even lower limit on toilet paper. The toilet paper limit comes following an “influx of people in warehouses across the country in the past week ‘stocking up’”.

Costco had also put limits on purchases of milk, eggs, rice and disinfecting and soap products, he added.