(CTN NEWS) -COLORADO SPRINGS —A shooting at an LGBTQ nightclub in Colorado Springs killed at least five people and injured 18 others.

Vazquez said Aldrich began shooting immediately after entering the club at about 11.55pm Saturday, and at least two patrons confronted him and subdued him. ” Their actions are greatly appreciated,” he said.

There was no immediate indication of the motive for the attack. Investigators are investigating whether the attack was a hate crime, Vasquez said.

As the president said in a statement on Sunday, “we must drive out the inequities that contribute to violence against LGBTQ people.”

“While no motive has yet been identified in this attack, we are aware that the [LGBTQ] community has been subjected to horrific hate violence in recent years,” Biden said. 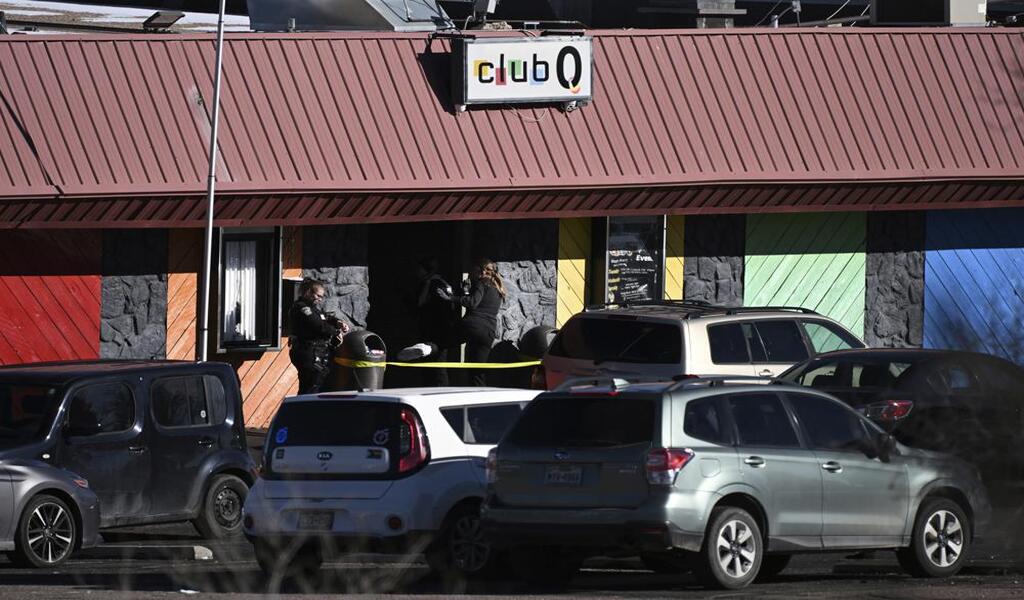 “Gun violence continues to have a devastating and particular impact on [LGBTQ] communities across our nation, and violent threats are rising.”

During the shooting, at least two firearms were recovered on the scene, including a long rifle. Michael Allen, the local district attorney, said Sunday that only one person appeared to be involved in the attack.

According to the New York Times, he was wearing body armour and firing a long gun similar to an AR-15.

According to officials, nearly 40 police officers responded to the club’s calls for assistance. Aldrich was being treated for injuries at a hospital on Sunday. 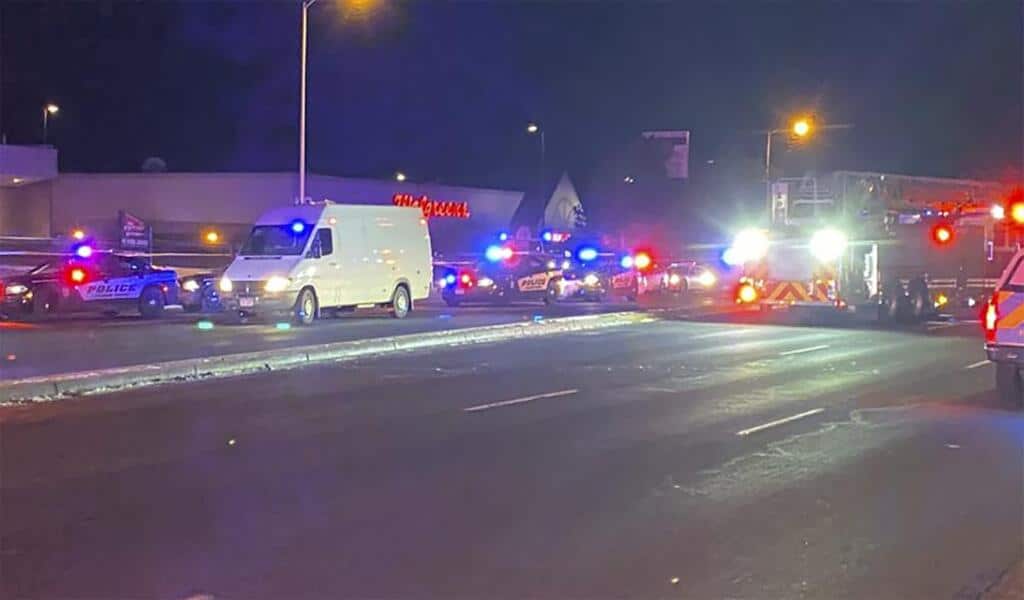 This image provided by KTTV shows the scene after a shooting at a gay nightclub in Colorado Springs, Colo., Saturday, Nov. 20, 2022. (KTTV via AP)

According to hospital officials, several of the injured are still in critical condition.

In total, ten people are being treated at UCHealth Memorial Hospital Central, according to David Steinbruner, the hospital’s chief medical officer.

In an archived version of Club Q’s website, a drag show was scheduled on Saturday evenings, according to the FBI’s investigation into the attack.

A punk and alternative show were scheduled for Saturday evening, followed by a birthday dance party starting at 11pm. In a press conference on Sunday, law enforcement officials described the club as a “safe-haven.”

Minutes after midnight, police received a call reporting a shooting. Minutes later, the first officers arrived on the scene.

At 12.02am, law enforcement officials detained the suspect.

Sunday morning was set aside for a drag brunch. Transgender day of remembrance is also observed on Sunday, an annual event to honour transgender people who have been killed by anti-transgender violence since 1999.

“Club Q is devastated by this senseless attack on our community. ‘Our thoughts and prayers go out to all of the victims and their families,’ wrote the club on its Facebook page.

“Our sincere thanks go to the heroic customers who subdued the gunman and ended this hate crime.”

While dancing at Club Q on Saturday night, Joshua Thurman, 34, heard shots while celebrating his birthday.

His response was to run into his dressing room, lock the doors, and turn out the lights. As well as the police coming in, he could hear the gunman being beaten up “by someone I assumed tackled him.”.

“The Colorado Springs has just one safe space, so if it is shot, what will we do?” he said to the local ABC affiliate.

According to local news reports, a person with the suspect’s name and age was arrested in 2021 and charged with two counts of felony menacing and three counts of first-degree kidnapping.

His neighbourhood was evacuated after his mother reported that he threatened to harm her with a homemade bomb.

On Sunday, police declined to comment on those reports.

In an attempt to contact a woman with whom Aldrich lived at two different addresses, phone numbers either went to voicemail or were deactivated.

In May of last year, Aldrich registered to vote. Political affiliation was not declared with his registration.

The attack came amid growing fears of violence and intimidation against drag queens.

Republicans have targeted drag shows with legislation that would ban them, prohibit drag story hours at libraries that would familiarize children with them, and bar minors from attending drag shows.

In the US, LGBTQ venues have been attacked in the past. A gay nightclub in Orlando was the site of one of the deadliest attacks in US history in 2016. 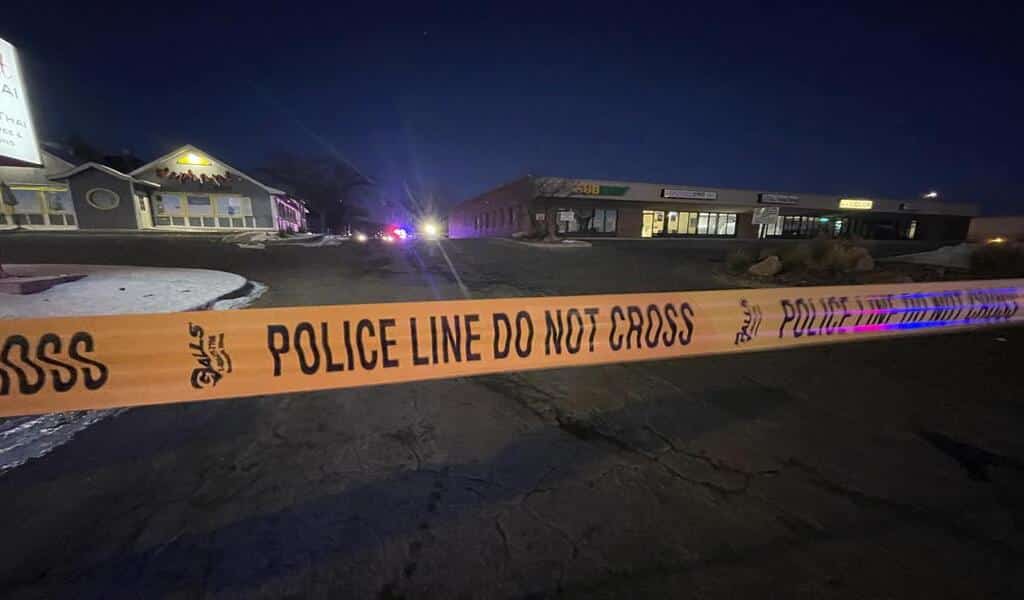 “My heart breaks for those who were killed, injured, and traumatized by this horrific shooting,” Polis said.

The brave individuals who blocked the gunman, likely saving lives, and the first responders who responded swiftly to this horrific shooting are eternally grateful to Colorado.”

“As we mourn, Colorado stands with our LGBTQ community and everyone affected by this tragedy.”

After their game later that day, the Denver Broncos said they would observe a moment of silence for Sunday’s victims.

In reaction, Eric Sorensen, the first openly gay congressman from Illinois, tweeted: “We must use loud voices to stand up against hate as we pray for those fighting for life.” “Hate speech against the LGBTQ community must stop.”

According to Cleveland news anchor Mike Brookbank, Before coming out, bars and clubs like #ClubQ in Colorado Colorado Springs created an environment where I felt comfortable being myself.

They’re places that create & celebrate community when you often feel lost and confused. When I lived in the Springs, I went to Club Q. I’m gutted.”

As of 2022, there have been 601 mass shootings in the US, according to the Gun Violence Archive, which defines a mass shooting as any incident in which four or more people are injured or killed.