A powerful 7.2 magnitude earthquake has struck the Caribbean nation of Haiti, killing at least 304 people and injuring more than 1,800. The 7.2-magnitude quake hit the west of the country on Saturday morning, toppling and damaging buildings including churches and hotels.

The epicenter of the quake was about 125 kilometers (78 miles) west of the capital of Port-au-Prince, the U.S. Geological Survey said, and widespread damage was reported in the hemisphere’s poorest nations as a tropical storm also bore down.

Haiti’s civil protection agency said on Twitter that the death toll stood at 304, most in the country’s south. Rescue workers and bystanders were able to pull many people to safety from the rubble. The agency said injured people were still being delivered to hospitals.

Prime Minister Ariel Henry declared a one-month state of emergency for the whole country and said he would not ask for international help until the extent of the damages was known. He said some towns were almost completely razed and the government had people in the coastal town of Les Cayes to help plan and coordinate the response.

“The most important thing is to recover as many survivors as possible under the rubble,” said Henry. “We have learned that the local hospitals, in particular that of Les Cayes, are overwhelmed with wounded, fractured people.”

He said the International Red Cross and hospitals in unaffected areas were helping to care for the injured, and appealed to Haitians for unity.

“The needs are enormous. We must take care of the injured and fractured, but also provide food, aid, temporary shelter and psychological support,” he said.

Later, as he boarded a plane bound for Les Cayes, Henry said he wanted “structured solidarity” to ensure the response was coordinated to avoid the confusion that followed the devastating 2010 earthquake, when aid was slow to reach residents after as many as 300,000 were killed.

U.S. President Joe Biden authorized an immediate response and named USAID Administrator Samantha Power as the senior official coordinating the U.S effort to help Haiti. USAID will help to assess damage and assist in rebuilding, said Biden, who called the United States a “close and enduring friend to the people of Haiti.”

A growing number of countries offered help, including Argentina and Chile, which said it was preparing to send humanitarian aid. ″Once again, Haiti has been hit by adversity,″ Chilean President Sebastian Piñera said.

Among those killed in the earthquake was Gabriel Fortuné, a longtime lawmaker and former mayor of Les Cayes. He died along with several others when his hotel, Le Manguier, collapsed, the Haitian newspaper Le Nouvelliste reported.

Philippe Boutin, 37, who lives in Puerto Rico but visits his family annually in Les Cayes, said his mother was saying morning prayers when the shaking began, but was able to leave the house.

The earthquake, he said, coincided with the festivities to celebrate the town’s patron saint, adding that the hotel likely was full and the small town had more people than usual.

“We still don’t know how many people are under the rubble,” he said.

On the tiny island of Ile-a-Vache, about 6.5 miles (10.5 kilometers) from Les Cayes, the quake damaged a seaside resort popular with Haitian officials, business leaders, diplomats and humanitarian workers. Fernand Sajous, owner of the Abaka Bay Resort, said by telephone that nine of the hotel’s 30 rooms collapsed, but he said they were vacant at the time and no one was injured.

The reports of overwhelmed hospitals come as Haiti struggles with the pandemic and a lack of resources to deal with it. Just last month, the country of 11 million people received its first batch of U.S.-donated coronavirus vaccines, via a United Nations program for low-income countries.

The earthquake also struck just over a month after President Jovenel Moïse was killed, sending the country into political chaos. His widow, Martine Moïse, posted a message on Twitter calling for unity among Haitians: “Let’s put our shoulders together to bring solidarity. It is this connection that makes us strong and resilient. Courage. I am always by your side.” 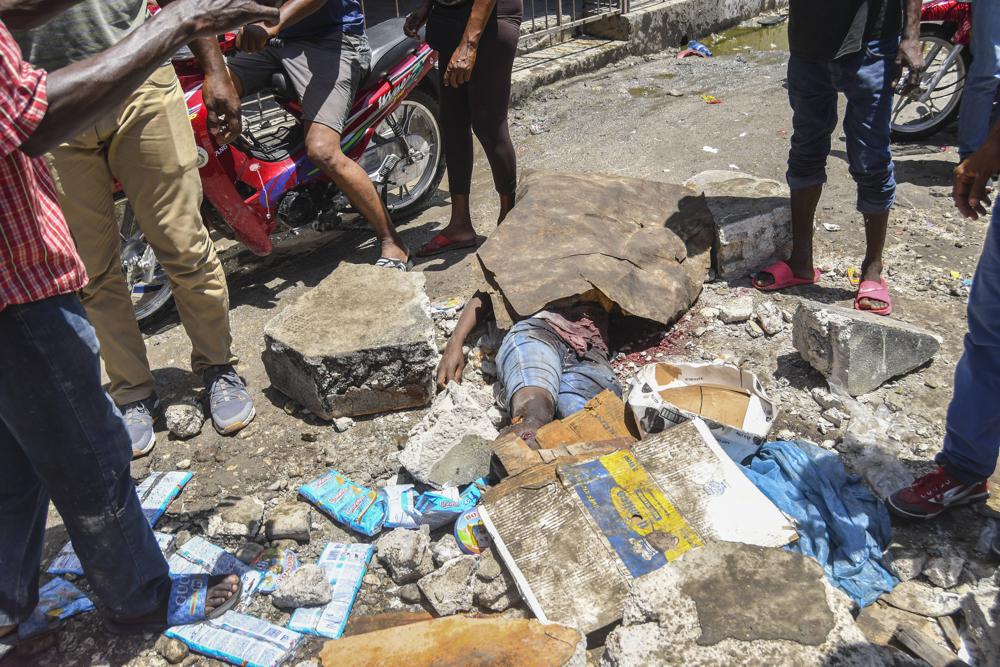 Deaths and damage in Haiti

Rescue efforts were hampered by a landslide triggered by the quake that blocked a major road connecting the hard-hit towns of Jeremie and Les Cayes, according to Haiti’s civil protection agency.

“Nobody can travel through the area,” Ndiaga Seck, a UNICEF spokesman in Port-au-Prince, said by phone. “We can only fly over or take another route.”

Seck said information about deaths and damage was slow coming to Port-au-Prince because of spotty internet service, but UNICEF planned to send medical supplies to two hospitals in the south, in Les Cayes and Jeremie. The agency was also assessing Haitians urgent needs including shelter and clean water.

Videos posted to social media showed collapsed buildings near the epicenter and people running into the streets. 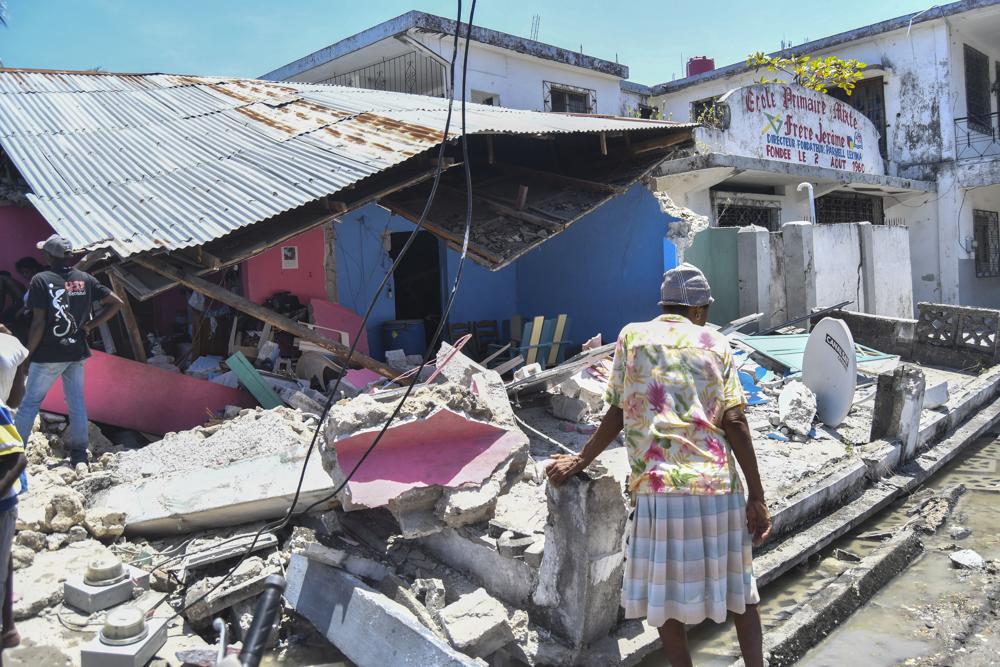 People in Port-au-Prince felt the tremor and many rushed into the streets in fear, although there did not appear to be damage there.

Naomi Verneus, a 34-year-old resident of Port-au-Prince, said she was jolted awake by the earthquake and that her bed was shaking.

“I woke up and didn’t have time to put my shoes on. We lived the 2010 earthquake and all I could do was run. I later remembered my two kids and my mother were still inside. My neighbor went in and told them to get out. We ran to the street,” Verneus said.

Paul Caruso, a geophysicist with the USGS, said aftershocks likely will continue for weeks or months, with the largest so far registering a magnitude 5.2.

The impoverished country, where many live in tenuous circumstances, is vulnerable to earthquakes and hurricanes. It was struck by a magnitude 5.9 earthquake in 2018 that killed more than a dozen people, and a vastly larger magnitude 7.1 quake that damaged much of the capital in 2010 and killed an estimated 300,000 people.

By early evening Saturday, the island had experienced four aftershocks above 5.0 and eight above 4.0. 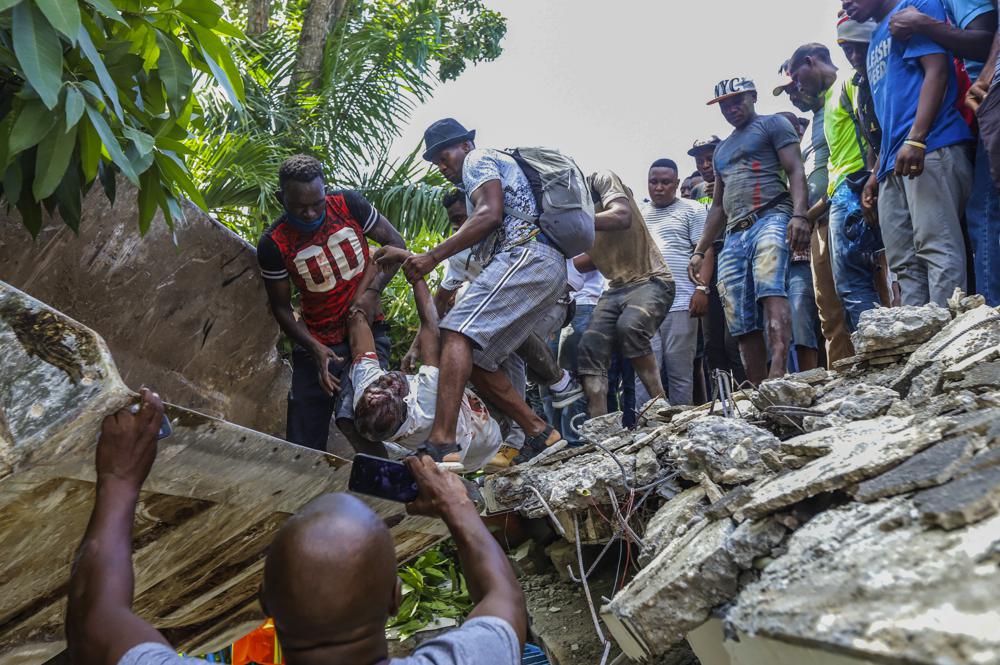 Claude Prepetit, a Haitian civil engineer and geologist, warned of the danger from cracked structures.

“More or less intensive aftershocks are to be expected for a month,” he said, cautioning that some buildings, “badly damaged during the earthquake, can collapse during aftershocks..”

Humanitarian aid groups said the earthquake would only worsen the nation’s suffering.

“We’re concerned that this earthquake is just one more crisis on top of what the country is already facing, including the worsening political stalemate after the president’s assassination, COVID and food insecurity,” said Jean-Wickens Merone, spokesman for World Vision Haiti.