As the government begins to implement a near citywide ban to ‘take back the sidewalks’, Thai vendors chew over returning to their villages or trying to ride out the storm.

BANGKOK – Street vendor Champ arrived in Bangkok in 2002 from the impoverished northeast region of Isaan to open a small food stall on the lively street of Sukhumvit Soi 38. He and his wife worked there, alongside dozens of other Thai vendors, for 14 years.

But when the owner of the building they worked next to died in 2014, his family sold the property for the construction of a luxury condominium and Champ and his fellow vendors were required to move.

The vendors asked to remain temporarily so they could prepare to relocate their stalls. However, even though Soi 38 had been known as one of the best places for street food in the city, news that the neighbourhood was changing spread quickly and business began to wane. A motorcycle taxi driver eats noodles at a street food stall during his lunch on Thonglor Road in Bangkok, Thailand. Photo: AP

The building was demolished in 2016, leaving the vendors with few alternatives. Some simply relocated to the opposite sidewalk, but there was little foot traffic and no stores in operation. Others opted to return to their provinces to seek better opportunities. For those who stayed, the news would only get worse.

Half a year later, at a district meeting, authorities announced a near citywide ban on food stalls. It started on the main streets of Thonglor and Ekkamai on April 17. The ban is supposed to spread to smaller streets as well, though no date has been given.

According to Vallop Suwandee, chief adviser to the Bangkok Metropolitan Administration (BMA), these vendors are “using public space for their personal use” and the job of the BMA is to “clean the city” and “give back the sidewalks” to Thai people.

Among the problems cited are the fumes emitted by small improvised kitchens, the cleaning of utensils on sidewalks and the obtrusiveness of stalls – many occupy entire sidewalks. But Champ said for most vendors renting an interior space was “simply too expensive”. 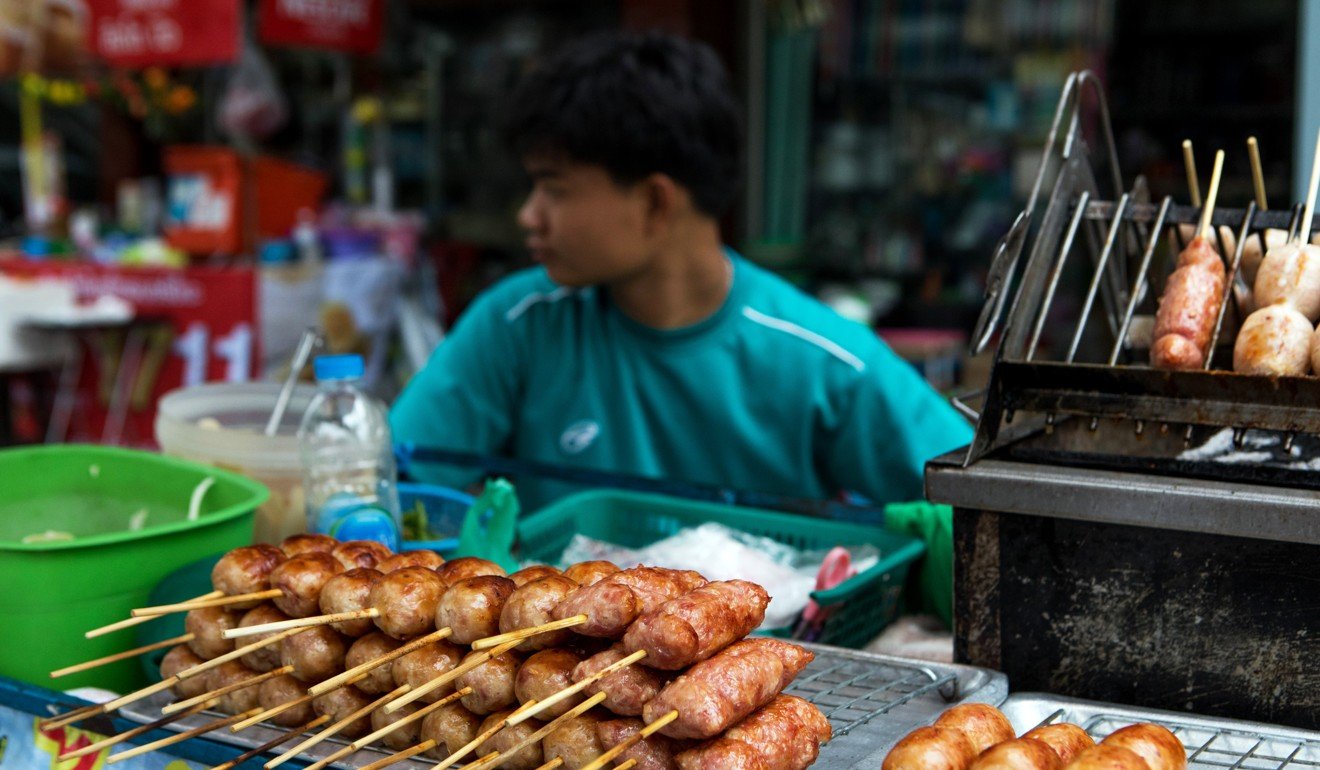 Grilled sausages and other meat snacks sit on display at a food stall in the Phaya Thai District of Bangkok, Thailand. Photo: Bloomberg.

The street-food ban met criticism in the media – Bangkok is often voted as the world’s best destination for street food in travel polls, and tourism is major of pillar of Thailand’s economy.

In reaction, Suwandee later said to he was misquoted, and the food stalls are not going to disappear completely; certain tourist sites, such as Khaosan and Yaowarat roads, will remain the same, but they have to “apply hygiene measures” and “follow traffic regulations”. A plan to reorganise these vendors will begin on May 31.

However, Kan Yuenyong, executive director of the NGO Siam Intelligence Unit, thinks that the ban on street food might be temporary, dependent on its acceptance from the media and the people. When the military faces “noisy” critics, “they tend to delay or cancel their policy for a while. But they might get back to enforce it again after people just forget the issue.”

This is not the first time the BMA has tried to impose order on the many vendors operating on Thai streets. A similar campaign to force the sellers to operate in markets was attempted in 1972. But since the military took power in 2014, the effort has once again gained momentum. 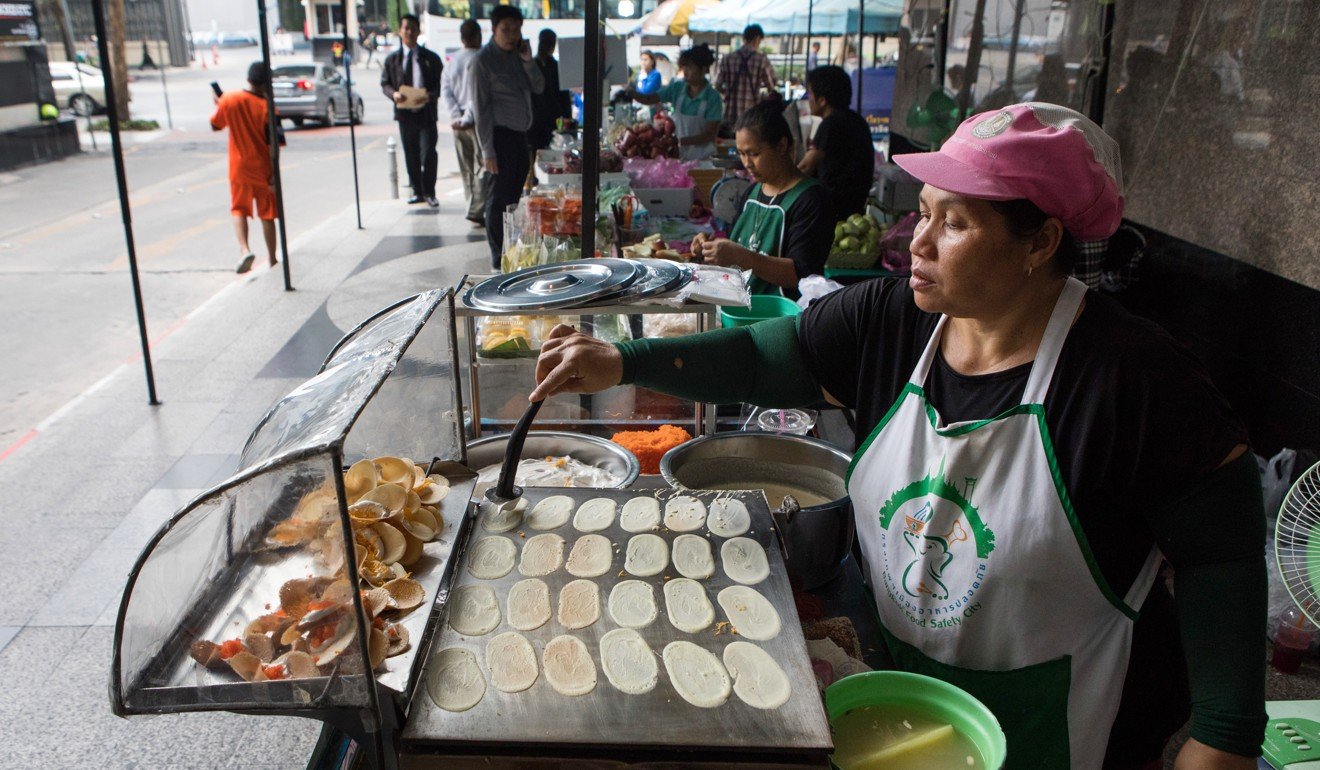 A woman cooks crepes on a hotplate at a food stall in the Phaya Thai District of Bangkok, Thailand. Photo: Bloomberg.

Yuenyong says it is normal to see policies “flip-flop” in Thailand. “It comes from a superficial analysis of this government and lobby forces from the so-called elite, rather than the well and thorough socioeconomic analysis,” he said.

According to Yuenyong, unelected leaders neglect the demands of the public, and this is the “fundamental problem of this government”.

The street-food ban has started in high-income commercial and residential neighbourhoods, making critics such as Yuenyong wonder if the vendors are being removed from the streets due to pressure from real estate developers.

Leela Punyaratabandhu, who writes the award-winning Thai food blog SheSimmers, said it was too early to know the ultimate fate of the ban. If it means relocating all the street carts to an area where vendors have to pay rent, “then it is very likely the vendors won’t be able to keep their prices the same”.

She said there was not a huge gap between the price of a bowl of noodles purchased off a sidewalk cart and the price at a shophouse eatery. So even without street carts, “there would still be affordable food available to those in the low-income bracket – just fewer choices and most likely less convenience in acquiring them”.

Champ and other street vendors complain that the BMA is doing too little to offer alternatives that would allow them to earn a living. He claims that the government “just wants to please the rich”, leaving aside the poor who do not know where to go.

“I don’t understand why my government does not see the problem this is going to cause, it will change everyone’s life,” he said.

Related Topics:Why is Bangkok City Banning its Famous Street Food Stalls?
Up Next

Discover the Laidback Charms of Chiang Rai in 36 Hours