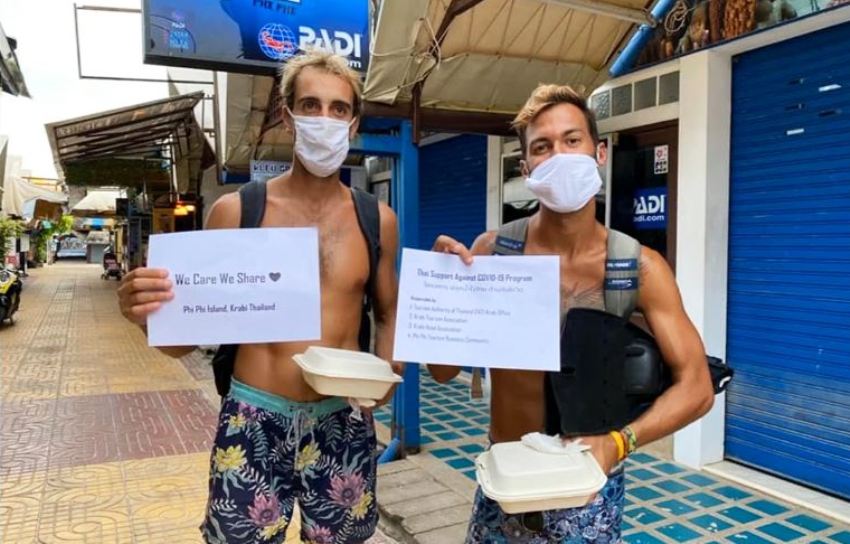 Foreign tourists have shown their appreciation for Thai hospitality and assistance from locals of Thailand’s Koh Phi Phi. After being stranded on the island in the Andaman Sea due to flight cancellations amid COVID-19 pandemic.

Banners and placards put up by foreigners show messages of gratitude towards the local people. Locals have provided the foreign tourists with food, accommodation and also medical care.

The tourist who posted one of the messages said she had been stranded on the island for two months and wished to thank Thailand for the helps that she will never forget.

Deputy Governor of Krabi Somkuan Khan-ngern said he was proud of all parties involved. Above all in giving care for 274 foreign tourists stranded on the island.

Koh Phi Phi Hospital and a medical team will continue to provide medical service for the foreigners. Furthermore they will conduct active covid-19 case finding on the island, he said.

Besides Koh Phi Phi, an estimated 10,000 foreign tourists are stranded on Koh Samui, Koh Pa-ngan and Koh Tao islands. COVID-19 travel restrictions and closures have trapped them on the Island’s in Southern Thailand. Meanwhile, a Russian student has been surviving on meals from monks at a temple in southern Thailand’s Surat Thani. According to the Bangkok Post he ran out of money and went to the temple for help.

The tourist, identified only as Ivan, 25, has been staying at Wat Mai Pattararam in the Surat Thani since March 26, Phra Khru Pisal Pattananukit said.

The acting abbot said the visitor arrived from Koh Samui, where he had been on holiday. Since he was running out of money, he asked if he could stay at the temple while waiting for a flight back to Russia.

The monk praised him for not sitting idly at the temple. Saying he helped other monks to clean the premises and worked in the kitchen preparing free meals for people.

The Thai government has extended all foreigners visas to stay in the country until the end of July.