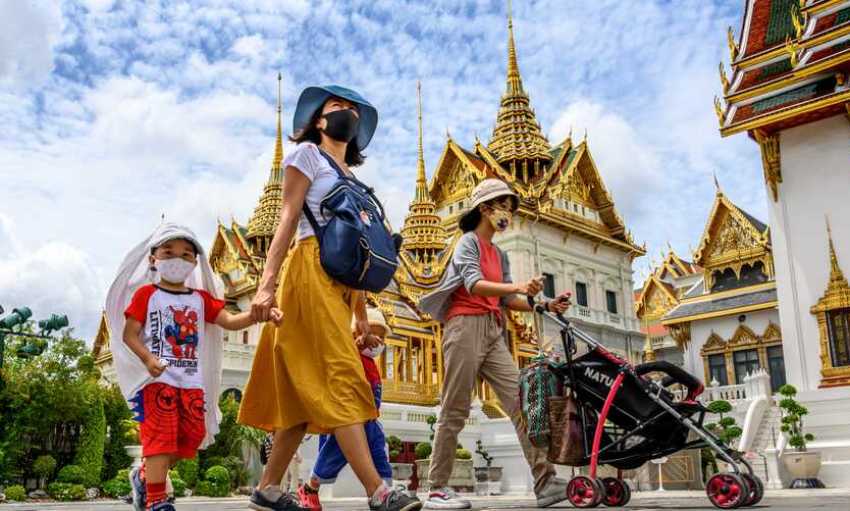 People visit the Grand Palace in Bangkok on June 7, 2020, as it reopened for visitors following restrictions to halt the spread of the COVID-19 novel coronavirus. (Photo by Mladen ANTONOV / AFP)
SHARE

According to a resent Dusit poll a majority of Thai people don’t want foreign tourists to returning to Thailand over second wave of Covid-19. The Covid-19 situation in Thailand is improving, and many Thai fear foreign tourists could bring it back.

Many believe Thai should be able to enjoy the country first, according to the results of an opinion poll by the Suan Dusit Rajabhat University, or Suan Dusit Opinion Poll.

The poll was conducted online between June 9-12 on 1,116 people throughout the country. Gauging their opinions after the government announced the easing of the Covid-19 lockdown. It also invited the Thai people to visit places around the country to help stimulate the economy.

Each respondent was allowed to give more than one answer

Asked whether they wanted foreign tourists to return to visit Thailand soon, 75.72% said “no”; with 54.39% saying that they would like the Thai people to tour their own country first before going elsewhere; and 21.33% saying that they were afraid the foreigners would spark a second wave of the virus.

The rest, 24.28%, said they wanted foreign tourists to come soon. Saying foreigners could help spur the economy and generate income for the country.

Thailand’s health department reported one new imported covid-19 coronavirus case and no new deaths on Sunday. Bringing the total number of infections in Thailand to 3,135 with 58 deaths since January.

The Centre for Covid-19 Situation Administration said the new case was a 35-year-old Thai female student who returned to the country from the United States last Monday.

She was placed in state quarantine and tested positive for Covid-19 Coronavirus on Friday.

The US ranked second in departure countries for Thai citizens returning home at 2,639. By far the largest number — 16,944 – have come back from Malaysia. India was third at 2,544, according to the centre.