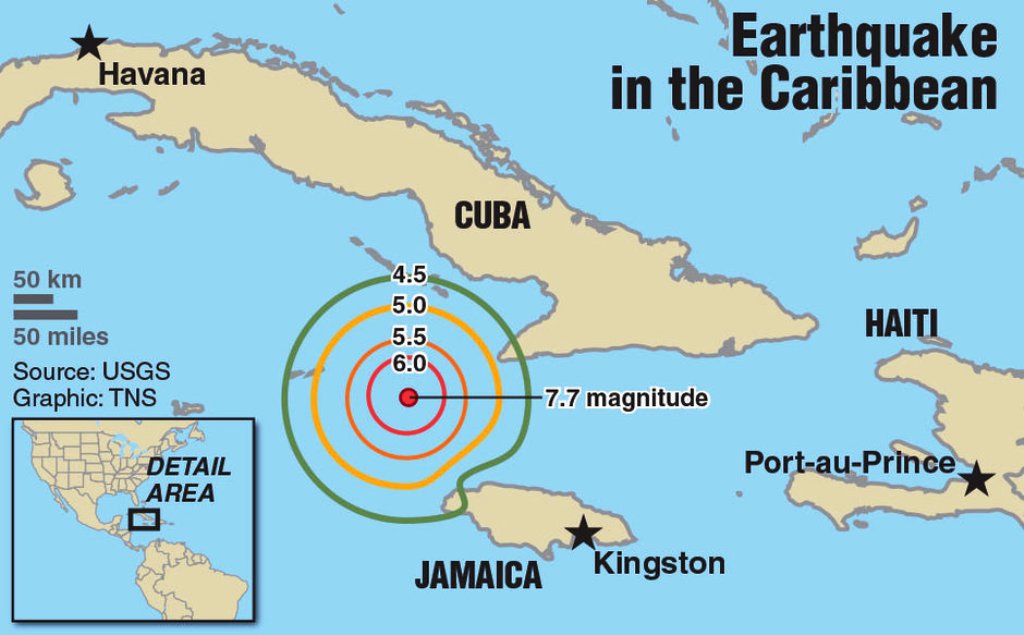 A magnitude 7.7 earthquake in the Caribbean Sea, followed by a series of strong aftershocks that shook Florida to Mexico. The earthquake hit Tuesday but apparently caused no major damage or casualties.

The initial tremor struck at 2:10 p.m. Eastern Time and was centered 86 miles northwest of Montego Bay, Jamaica. Also 87 miles west-southwest of Niquero, Cuba, the U.S. Geological Survey said. The earthquake’s depth was relatively shallow at 6 miles beneath the surface.

The USGS initially estimated the earthquake’s magnitude at 7.3 before upgrading it to 7.7. The ensuing aftershocks so far have topped out at a magnitude 6.1.

There have been no immediate reports of damage or injuries. However, the earthquake caused very strong to severe shaking in portions of far western Jamaica. Capable of moderate to heavy damage, the USGS said.

It also said moderate shaking was felt on Grand Cayman Island. While light shaking was reported on the Yucatan Peninsula in Mexico. Other affected countries include the Bahamas, Haiti and Honduras.

Gov. Carlos Joaquín González of Mexico’s Quintana Roo, which is home to Cancun, Tulum and other popular Caribbean beach resorts, said the earthquake was felt in multiple parts of the state. In total, five states in Mexico felt the tremor, the seismological service reported.

Quake was also felt as far away as South Florida

Stenette Davis, a psychiatrist at a Cayman Islands hospital, said she saw manhole covers blown off by the force of the quake. Also sewage exploding into the street, but no more serious damage.

Claude Diedrick, 71, who owns a fencing business in Montego Bay, said the shaking felt “like I was on a bridge. Its was like there were two or three heavy trucks and the bridge was rocking, but there were no trucks.”

The quake was also felt strongly in the coastal city of Santiago, in the eastern part of Cuba.

“We were all sitting and we felt the chairs move,” said Belkis Guerrero, who works in a Catholic cultural center in Santiago. “We heard the noise of everything moving around.”

This is the fourth magnitude 7 or greater earthquake in the Caribbean since 2000, according to AccuWeather meteorologist Jesse Ferrell. The quake appears to be on a fault boundary between the North American and Caribbean plates, according to seismologist Lucy Jones.

The last month has been an extremely active period for earthquakes in the Caribbean. The southern part of Puerto Rico was hit by a sequence of quakes that began on Dec. 28 with a magnitude 4.7 shaker and was followed Jan. 7 by a magnitude 6.4 aftershock, then a 5.2 on Jan. 15, US Today reports.

The USGS said the sequence has produced more than 300 quakes bigger than magnitude 3, which can be felt by humans.

Social Media A Buzz with Outrageous Claims Over Coronavirus

Belgian Prison Gets “Greetings from Thailand” Postcard from Escapee