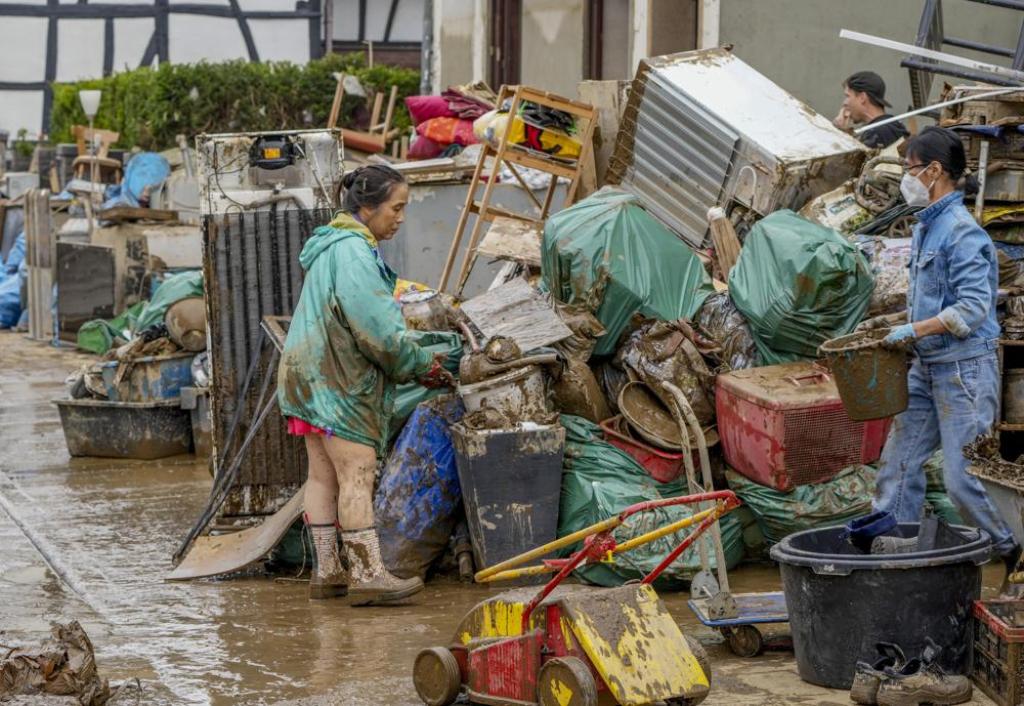 In Western Europe rescue workers labored to deal with damage laid bare by receding water Saturday as the death toll from disastrous flooding rose above 160 and thoughts turned to the lengthy job of rebuilding communities devastated in minutes.

Days of heavy rain turned normally minor rivers and streets into raging torrents this week and caused the disastrous flooding that swept away cars, engulfed homes and trapped residents.

Immediately after the floods hit on Wednesday and Thursday, German authorities listed large numbers of people as missing — something apparently caused in large part by confusion, multiple reporting and communications difficulties in the affected areas, some of which lacked electricity and telephone service.

By Saturday, authorities still feared finding more people dead, but said numbers unaccounted for had dropped constantly, without offering specific figures. In Belgium, 103 people were listed as missing Saturday, but the crisis center said lost or uncharged cellphones and people taken to hospitals without identification who hadn’t had an opportunity to contact relatives were believed to be factors in the tally. 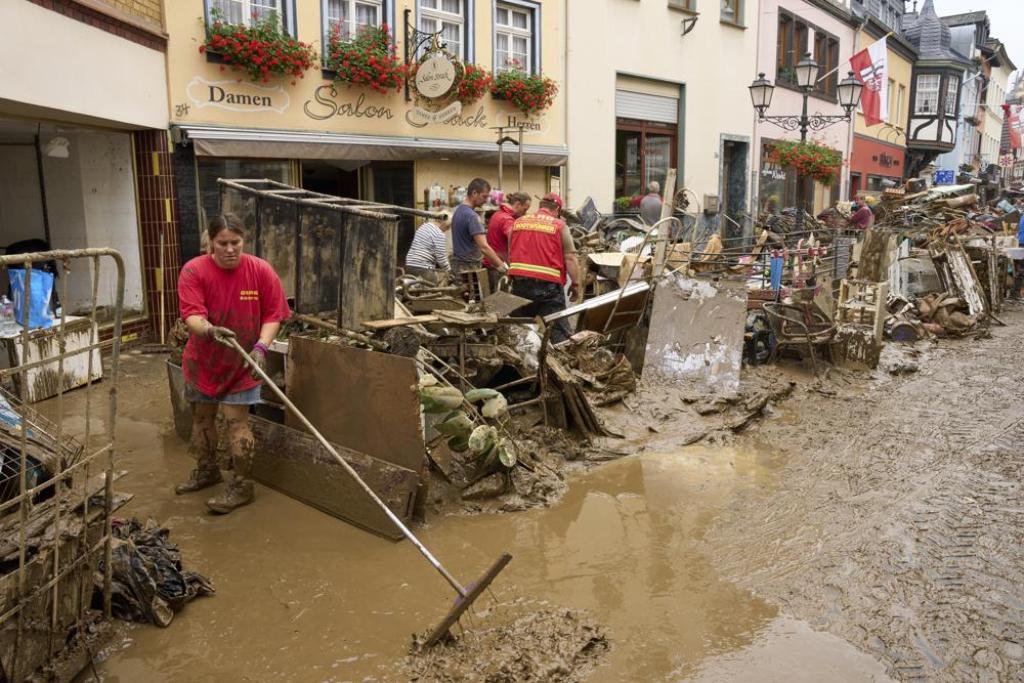 “A lot of people have lost everything they spent their lives building up — their possessions, their home, the roof over their heads,” German President Frank-Walter Steinmeier said after meeting rescue workers and others in the town of Erftstadt.

“It may only be possible to clear up in weeks how much damage needs to be compensated,” he said. Steinmeier said that people in the affected areas need continuing support.

“Many people here in these regions have nothing left but their hope, and we must not disappoint this hope,” he said.

In Erftstadt, a town southwest of Cologne, a harrowing rescue effort unfolded on Friday when the ground in a neighborhood gave way. At least three houses and part of a mansion in the town’s Blessem district collapsed.

The German military used armored vehicles to clear away cars and trucks overwhelmed by the floodwaters on a nearby road, some of which remained at least partly submerged. Officials feared that some people didn’t manage to escape in Erftstadt, but no casualties were confirmed by Saturday afternoon.

In the Ahrweiler area, police warned of a potential risk from downed power lines and urged curious visitors to stay away. They complained on Twitter that would-be sightseers were blocking some roads.

Around 700 people were evacuated from part of the German town of Wassenberg, on the Dutch border, after the breach of a dike on the Rur river.

Visiting Erftstadt with Steinmeier, North Rhine-Westphalia governor Armin Laschet promised to organize aid for those immediately affected “in the coming days.” He said regional and federal authorities would discuss in the coming days how to help rebuilding efforts. Chancellor Angela Merkel’s Cabinet plans to discuss the issue on Wednesday.

“We will do everything so that what needs to be rebuilt can be rebuilt,” Laschet said.In eastern Belgium, many train lines and roads remained blocked. 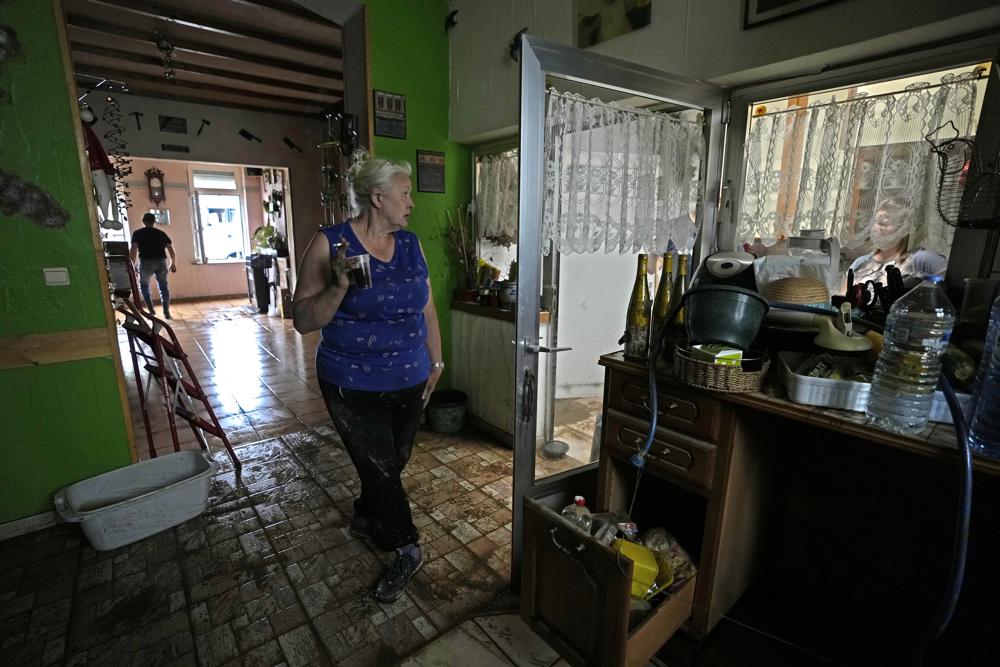 A resident of the Belgian town of Herk-de-Stad said she put off sleeping to try to empty her house of water. “We have been pumping all night long trying to get the water out of the house,” Elke Lenaerts told broadcaster VTM.

Parts of the southern Netherlands also experienced heavy flooding, though thousands of residents were allowed to return home after being evacuated on Thursday and Friday.

Caretaker Prime Minister Mark Rutte, who visited the region on Friday, said that “first, there was corona, now these floods, and soon people will have to work on cleanup and recovery.”

Among other efforts to help the flood victims, the Hertog Jan brewery, which is based in the affected area, handed out 3,000 beer crates so locals could raise their belongings off the ground to protect them from the flooding. 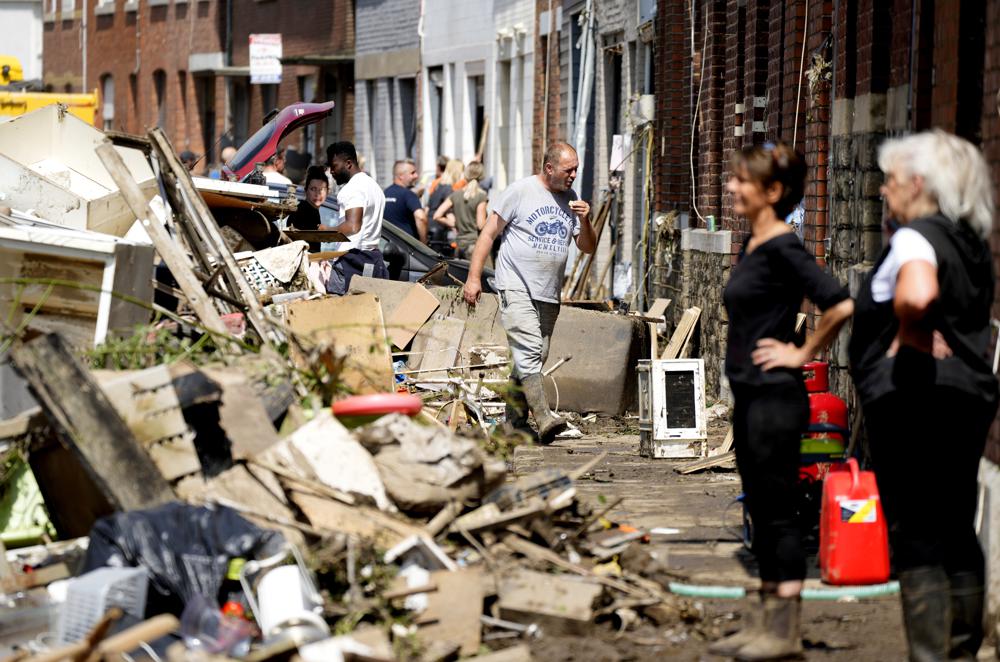 Flooding damage to homes and businesses

An emergency dike in the town of Horn didn’t hold and some houses were inundated. Authorities issued a warning to stay off the Maas River because of debris. Rescuers worked to save a cow stuck neck-deep in muddy water.

At the other end of Germany, there was flooding Saturday evening following torrential rain in the Saechsische Schweiz area near Dresden and across the border in the Czech Republic.

Roads, basements and railroad tracks flooded, disrupting train service between the Czech town of Decin and Bad Schandau, Germany. A summer camp for children on the Czech side had to evacuated.

In Austria, a flash flood swept through the town of Hallein, near the German border, late Saturday. Chancellor Sebastian Kurz said on Twitter that heavy rain and storms were causing serious damage in several parts of Austria.

“I thank all first responders and volunteers who are doing everything they can to help! We won’t leave those affected alone and will support the reconstruction,” he wrote.