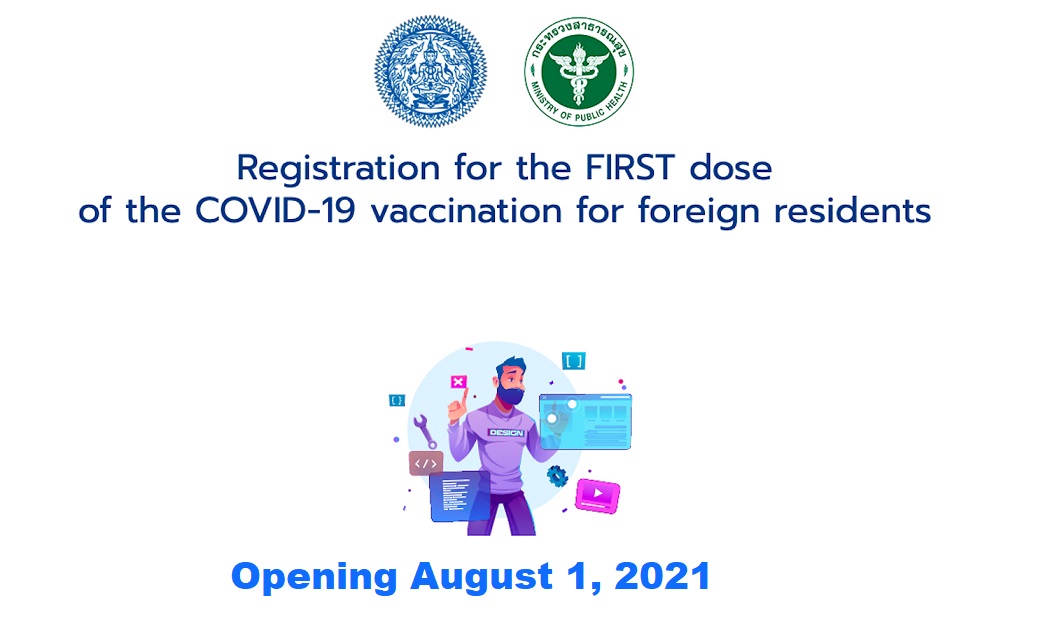 A new website has been created for expats registration for free Covid-19 vaccinations and is scheduled to open on Sunday August 1st for expatriates across the country, the Ministry of Foreign Affairs said on Saturday.

The site, expatvac.consular.go.th, is scheduled to go live at 11am, ministry spokesman Tanee Sangrat said on his Twitter account on Saturday evening.

It will offer registrations “for expats of all ages in all provinces who still have not been vaccinated to date”, added deputy spokesman Natapanu Nopakun in another tweet.

No details were available on the timeline for appointments or what vaccines would be available. The free vaccines provided by the government so far have been from Sinovac and AstraZeneca.

However, authorities have been ordering other vaccines for delivery later this year and into next year. In the near term, 150,000 out of the 1.5 million Pfizer vaccine doses donated this week by the United States would be reserved for expats who are elderly or are suffering from one of seven underlying conditions, along with pregnant women, and Thai nationals planning to go abroad such as students.

The government has said from the outset of its vaccination campaign that everyone living in the country, Thai and foreign, is entitled to free jabs. And while obtaining a shot, either by registering online or at a walk-in centre, has been a hit-and-miss affair for many, about 20% of the people in the country have now received at least one dose.

The new Expatvac registration site is the second attempt to help foreign residents get inoculated. An earlier site, Thailandintervac, was only able to offer a limited number of appointments at a handful of hospitals in Bangkok before it went dormant.

Some foreigners in Bangkok were able to take advantage of vaccinations arranged earlier this month on less than a day’s notice through several embassies, with a window for registration of only a few hours.

Outside of the capital region, the registration process varies from province to province but in many cases expats are reporting successes.

In Prachuap Khiri Khan, for example, Hua Hin Hospital has won plaudits for the system it developed to help foreigners use the provincial vaccination portal Mor Prachuap Prom. The site requires a 13-digit ID number, but foreigners can easily obtain one in a few minutes by visiting a registration desk at the hospital.

Staff will note their passport details and then give them a 13-digit number that can be used to make a booking on the site.

Meanwhile, covid-19 numbers continue to set records, with 178 deaths and 18,912 cases over the past 24 hours, the Public Health Ministry reported on Saturday morning.

Of the new cases, 18,102 cases were in the general population and 810 among prison inmates.

Over the past 24 hours, 10,750 Covid-19 patients were discharged from hospitals.

The death toll was at 4,763 in the third wave and 4,857 from the beginning of the pandemic early last year.

The previous daily records were previously seen on Thursday, when 165 deaths and 17,669 cases were logged.