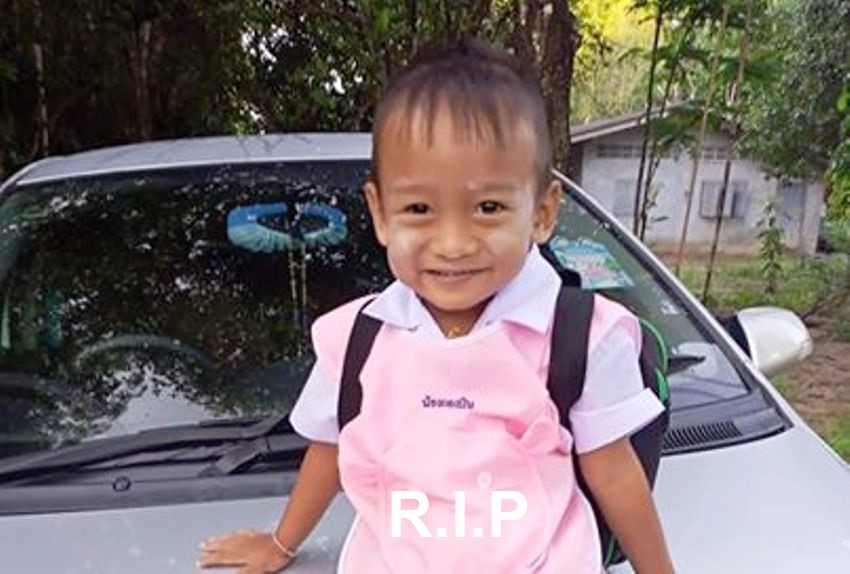 A two-year-old toddler who was left in a scorching hot school van outside a childcare centre for six hours died on Saturday evening. Four days after the two-year-old boy fell into a coma in Nakhon Si Thammarat, Thailand.

Above all doctors at the hospital tried diligently to save the toddlers life but sadly he died of organ failure.

The toddler was taken to the hospital on Aug 11 after he was found unconscious in the back of the van at the Wat Srimaram childcare development centre in tambon Kathum of Phibun district. He had been forgotten and left locked in the van alone from 7.30am to around 1.30pm.

Consequently the toddler was in ICU and put on life support at the Nakhon Si Thammarat hospital.

Doctors on Saturday tried in vain to save the boy’s life after his liver and kidneys stopped functioning. His parents later decided to have their son taken off life support. The hospital confirmed his death at 5.20pm.

Pol Maj Gen Sonthichai Arwattanakulthep, chief of the Nakhon Si Thammarat police, said police would press charges of negligence causing death against the van driver and a teacher. Both of whom were in charge of looking after the children in the van, the Bangkok Post reported.

Kindergarten Girl dead after being left in a Scorching hot van

In August of 2018, a three-year-old kindergarten student died after she was left behind in a scorching hot school van in southern Thailand. Police said the girl was discovered after her mother went to pick her up at the end of school in the southern province of Pattani. Consequently the mother was told her daughter was absent.

The mother and a teacher located the driver, who led them to the locked van where they found her body.

“The girl’s body was pale, no wounds, with a little blood stain at her nose,” Montri Kongwatmai, commander of the Sai Buri district police, said. “She must have thrashed around.”

The heat inside the scorching hot van and a lack of air caused her death, Montri said, citing the autopsy results.

The 23-year-old driver admitted to failing to check whether all the children had gotten out of the school van in the morning, Montri said.

He was also charged with criminal negligence resulting in death.

Between 2012 and 2016 in Thailand, there were 13 cases of children abandoned inside school vans and also private cars, statistics show, part of a worldwide phenomenon referred to as “Forgotten Baby Syndrome”.

Furthermore six of the cases were fatal.

The previous such death occurred in June when a five-year-old was left in a school van in Khon Kaen province.

“The problem with child deaths in school vans … is that (it) keeps repeating itself. Above all due to the negligence of the service providers,” Adisak Plitponkarnpim, director of the Thailand’s National Institute of Child and Family Development.

Temple Monk Locks Himself in Dog Cage in Protest Over Punishment