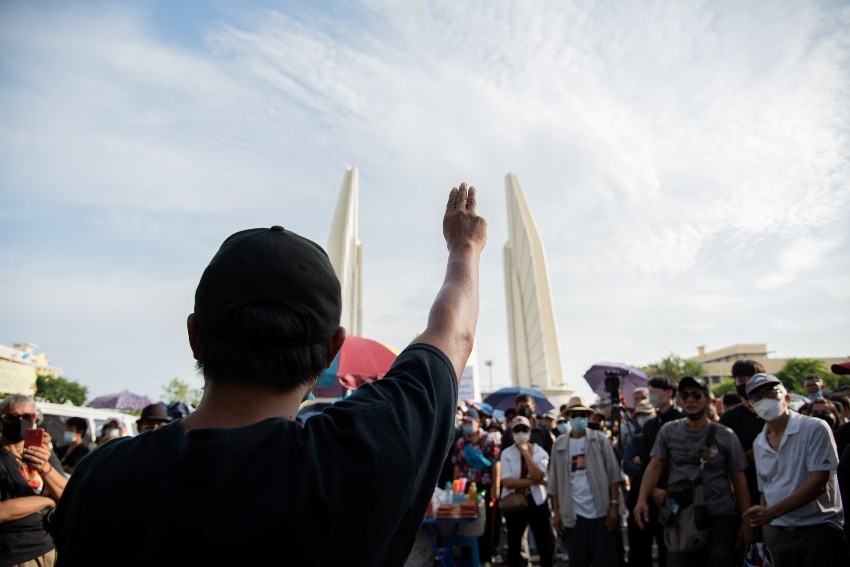 The famous 1939 Democracy Monument in Bangkok, Thailand filled with thousands of pro-democracy protests this Sunday August 18, 2020. The rally was hosted by The Free Youth group that stands for making changes to the Thai government.

The event started at 3PM. The Pro-Democracy monument itself was surrounded by fencing and police but a large stage and barricade was put in place facing Ratchadamnoen Road in Bangkok. The roundabout was completely filled with participants by 5PM.

Most attending the rally were students dressed in black sporting masks and protest signs. The rally was aimed at democracy in Thailand as well as dissolving the parliament. Other groups also participated ranging from LGBT rights groups to sex-worker rights groups.

The organization of the Pro-Democracy event in Bangkok was admirable. Timing of the day’s schedule was very tight with little breaks in between performers. Performances ranged from music and rap to spoken word and poetry. Pop culture was present throughout the rally in the form of Star Wars and Harry Potter songs and iconography.

The event was peaceful with minimal conflict. Smaller pro-royalist group members remained close but with only verbal issues. By evening the streets were entirely packed with little movement allowed. Most of the crowd took to sitting on the ground while cheering and enjoying the performers and speeches.

Anon Nampa, recently jailed and released activist and lawyer, made a 10 minute speech around 10PM in which he commented more on the government and change.

The event ended around 11PM with a song and the crowd holding 3 fingers in the air alluding to the film Hunger Games symbolizing respect and gratitude.

Photos by Will Langston – www.willlangston.com

Northern Thailand Police Crack Down on Crime, 865 Arrests in 2 Days