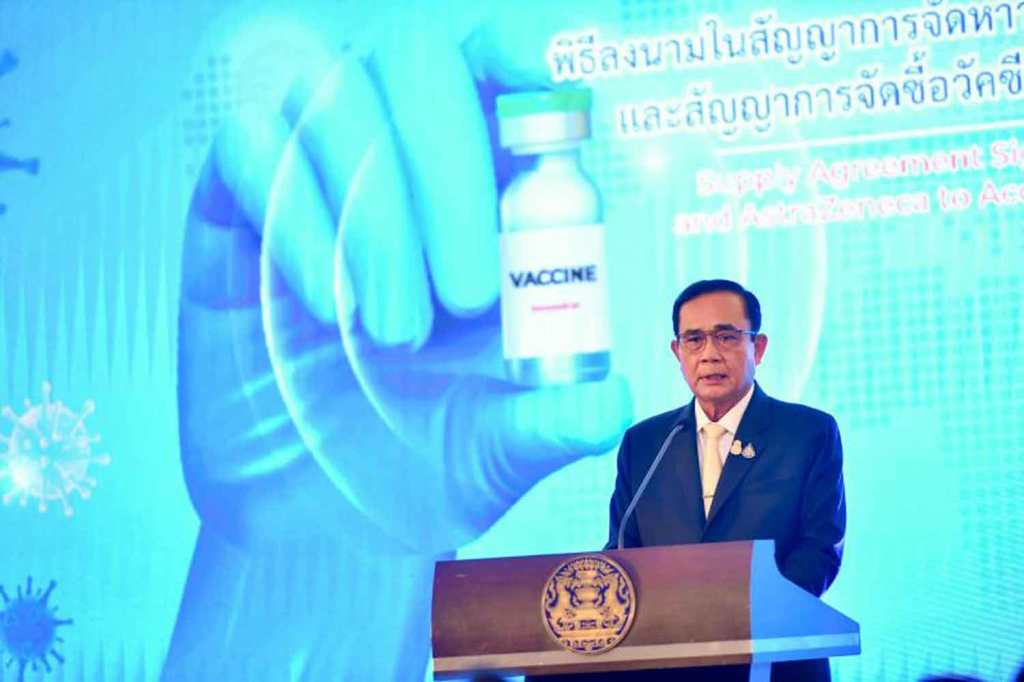 The government of Prime Minister Prayut Chan-o-cha is facing harsh criticism over the slow rollout of AstraZeneca vaccines, one of the main vaccines in Thailand, leading to vaccination schedules being postponed.

In recent weeks, the Prayut government has come under heavy criticism over vaccine distribution after 6 million AstraZeneca vaccine doses due for delivery in June were delayed. June was designated as the starting month for blanket vaccinations nationwide which ended in vaccine shortages and cancelled vaccinations.

The Prayut government admitted it originally planned to roll out 10 million AstraZeneca vaccine doses this month, but only 5-6 million doses would arrive because the Government was slow to place orders for the vaccines. AstraZeneca Thailand had to send its vaccines to other countries that had also ordered them. As a result, public bookings under various vaccination programs were delayed.

Wiroj Lakkhanaadisorn, an MP and spokesman of the Move Forward Party, said some 6.3 million AstraZeneca vaccine doses were due for delivery in June. However, only about 5.37 million doses of AstraZeneca were delivered, he said, citing information from the Ministry of Higher Education, Science, Research and Innovation.

“There is also a report that from July, AstraZeneca Thailand will export vaccines to other countries, and only one-thirds of the vaccines produced will be reserved for Thailand,” Mr Wiroj said, saying that of the 15-17 million doses produced monthly, only 5-6 million doses will be delivered to Thailand a month.

Chanin Rungthakiat, deputy spokesman of the Pheu Thai Party, said the Prayut government has bungled vaccine management for Thailand from the very start.

In early stages, the government chose AstraZeneca as the only main vaccine so there were not enough quality vaccines for people, he said. The government has now used Sinovac vaccines to make up for the missing AstraZeneca doses and plans to buy 28 million more doses of the vaccine, Mr Chanin said.

As for Moderna vaccines, the government has been slow in procuring them despite studies showing the vaccine is effective against the highly-transmissible variants of Covid-19, he said. Instead, Moderna vaccines have become “alternative vaccines” which means people have to pay for them, Mr Chanin said.

Alternative vaccines other than AstraZeneca that companies are allowed to import are Moderna and Sinopharm, he said. Before the latest outbreak struck, the GPO has been working to procure vaccines since Feb 25, he said.

“The GPO contacted Moderna Inc in the US to buy its vaccines and the company replied that it would deliver the vaccines in the first quarter next year at the earliest,” he said. Moreover, the GPO also contacted at least two vaccine manufacturers and they said it was impossible to supply the vaccines to Thailand this year, Dr Vitoon said.

Responding to two private hospitals which claimed they can buy vaccines directly from Moderna, Dr Vitoon insisted that Zuellig Pharma is the only authorised agent for the vaccine imports.

On May 15, the company said the vaccines must be purchased via the state so the GPO has only acted on the government’s behalf, he said. He also explained the government has not allocated budget to procure the Moderna vaccine so the delivery has been slow.

The GPO is gathering requests for the vaccine from more than 300 private hospitals nationwide to make sure they really want the vaccine, he said. So far, about 9 million doses of the vaccine have been requested. The company did not give the specific date and month of the delivery.

The GPO has yet to sign purchase contracts because it has to wait for private hospitals to send their money before the contracts can be signed.

The GPO cannot afford to sign the contracts unless the hospitals pay first, Mr Vitoon said. The GPO is expected to sign contracts with Zuellig Pharma in August, he added.