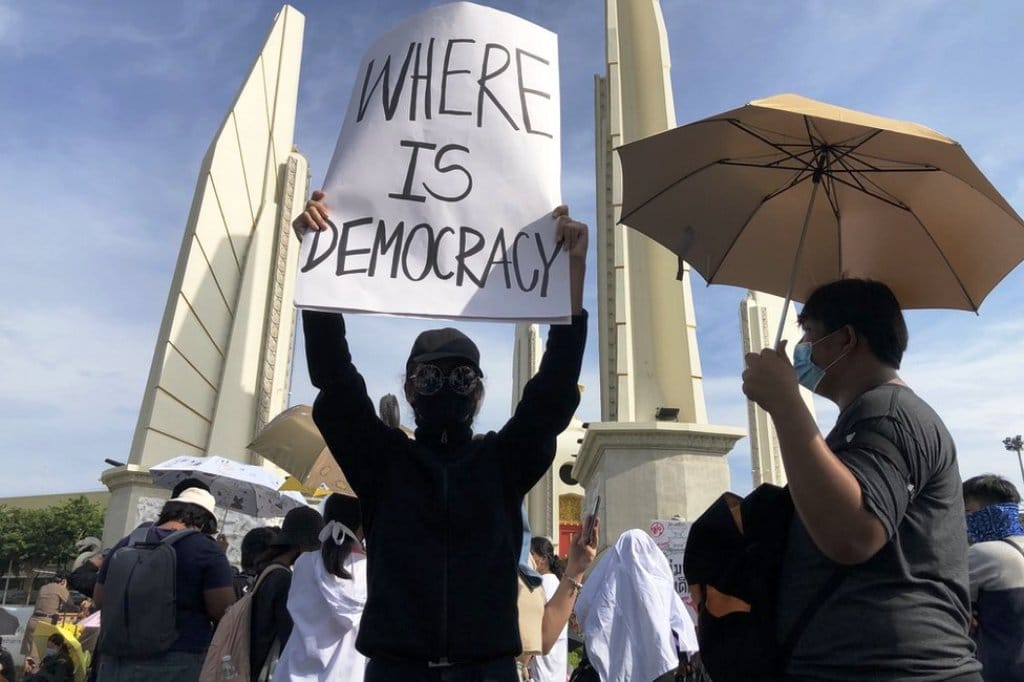 Hundreds of demonstrators rallied at Democracy Monument on Sunday despite the Prime Ministers ban on gatherings and police warning that the gathering would breach Gen Prayut’s emergency decree.

Pro-democracy demonstrators of the People Go network converged at Democracy Monument in Bangkok to demand democracy and the release of for four protest leaders detained in a Bangkok Remand Prison.

The protest leaders are Arnon Nampa, Parit “Penguin” Chiwarak, Somyos Prueksakasemsuk and Patiwat “Mor Lam Bank” Saraiyaem, who were denied bail after being charged with lese-majeste under Section 112 of the Criminal Code.

“We are not fighting the police deployed in front of us. We are fighting against a Prime Minister Prayut’s Dictatorship,” Jatupat Boonpattararaksa, better known as Pai Dao Din, announced at the rally site.

He led the group on their 250-kilometre trek from Nakhon Ratchasima to Bangkok. On Saturday, the marchers arrived at Kasetsart University. On Sunday, the 17th day, they walked the final 15km to Democracy Monument.

Pol Col Tossaphol Ampaipipatkul, the Samran Rat police station chief, and his counterpart at Chana Songkhram police station, Pol Col Sanong Sanemaee, read out an announcement saying the rally was in breach of the decree.

Mr Jatupat insisted on holding the rally and setting up a stage at the rally site, despite an order from police to disperse. He pledged the assembly would remain peaceful throughout.

It was the second rally in two days by pro-democracy activists after four demonstrations on Saturday.

Ms Panusya said she was also charged for violating the emergency decree and sanitary and disease control acts in relation to the rally at the Bangkok landmark on Feb 13.

Ms Panusaya and other protest leaders under the People’s Movement banner led the rally to press for the release of four detained activists on Feb 13. The protesters removed the plants from the monument to clear the way for the  protest.

Pro-democracy leader Panupong Jadnok, also known as Mike Rayong, on Feb 13 accused the Bangkok Metropolitan Administration of intentionally placing the trees there to obstruct the rally.

The demonstration ended with a scuffle with police outside the Supreme Court near Sanam Luang after authorities blocked them from going to pay their respects at the Bangkok Pillar Shrine following a march along Ratchadamnoen Avenue from the monument.