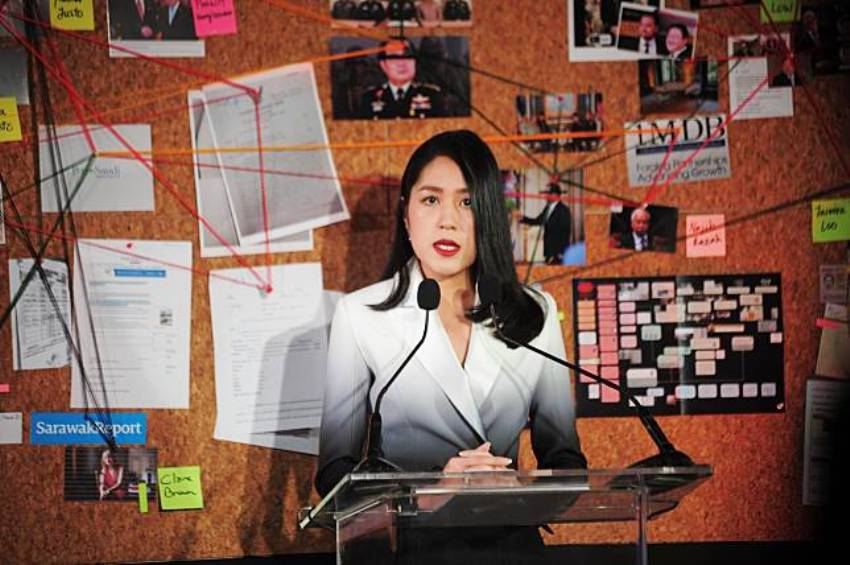 The accusation comes a day ahead of a no-confidence debate in the Thai parliament against Prime Minister Prayuth Chan-ocha and five other Cabinet members.

Eleven party executives were kicked out of parliament immediately and banned from political office for 10 years. However the party’s remaining 65 lawmakers can keep their seats if they join party within 60 days.

FFP spokeswoman Pannika Wanich said at a news conference that because she was one of the lawmakers who lost their seats, she was presenting the case the party had prepared about the 1MDB scandal outside of parliament.

Government spokeswoman Narumon Pinyosinwat said the government was not involved in the case. “What Pannika said is groundless and vaguely connected,” she said.

The alleged mastermind behind the 1MDB scandal is fugitive Malaysian financier Low Taek Jho. He is believed to be hiding out in China.

U.S. investigators say at least $4.5 billion was stolen from 1MDB by Prime Minister Najib’s associates. The money was laundered through layers of bank accounts in the U.S. and other countries. The money was used to finance Hollywood films and buy hotels; buy a luxury yacht; art works, jewelry and other extravagances. More than $700 million from the fund allegedly landed in Najib’s bank account.

Pannika’s 1MDB scandal assertions are generally known and break no new ground. However, all have previously been treated as sideshows to the case. This is the first major effort to spotlight any involvement by Thailand.

The first involved Thailand’s arrest of Xavier Justo, a Swiss national who worked with a company implicated in the scandal. He then leaked information essential to its exposure. Pannika alleged that Thai authorities had denied the U.S. FBI, which was investigating the case, access to the jailed Justo. However they allowed parties with a vested interest in covering it up to see him.

She also said that Jho Low had freely visited Thailand five times in 2016-2018 even though an Interpol “Red Notice” requested by Singapore seeking his arrest had been issued. China has also been widely reported to have allowed him entry during this period, when Najib was still in power. His party lost a May 2018 general election.

“The Red Notice of Jho Low, it was shocking that Thailand ignored Interpol’s Red Notice. And the only two countries who did, who do that continuously, are China and Thailand,” said Pannika. “And who are we? China is China but we are Thai. So this is unacceptable. We need a more responsible government.”

She also pointed out the links between two close associates of Jho Low and a Thai businessman.

The events she referred to all seem to have taken place before the current government under Prayuth took office last year. However, Prayuth also served as prime minister in the Junta government that held power before that. After staging a 2014 coup ousting an elected government.

The no-confidence debate in the lower house, scheduled to run three days, will be the first since the coup.

Prayuth will be the main target of the opposition. The opposition is expected to attack his leadership in facing economic troubles. Even more a serious air pollution problem and the health threat from the new coronavirus.

The other five Cabinet members facing censure are; deputy prime ministers Prawit Wongsuwan; Wissanu Krea-ngarm; Interior Minister Anupong Paochinda; Foreign Minister Don Pramudwinai and Deputy Agriculture Minister Thammanat Prompao. The latter was appointed to the Cabinet despite being convicted in 1994 of conspiring to import heroin to Australia. He served four years in prison there but denies his jail sentence ever happened.