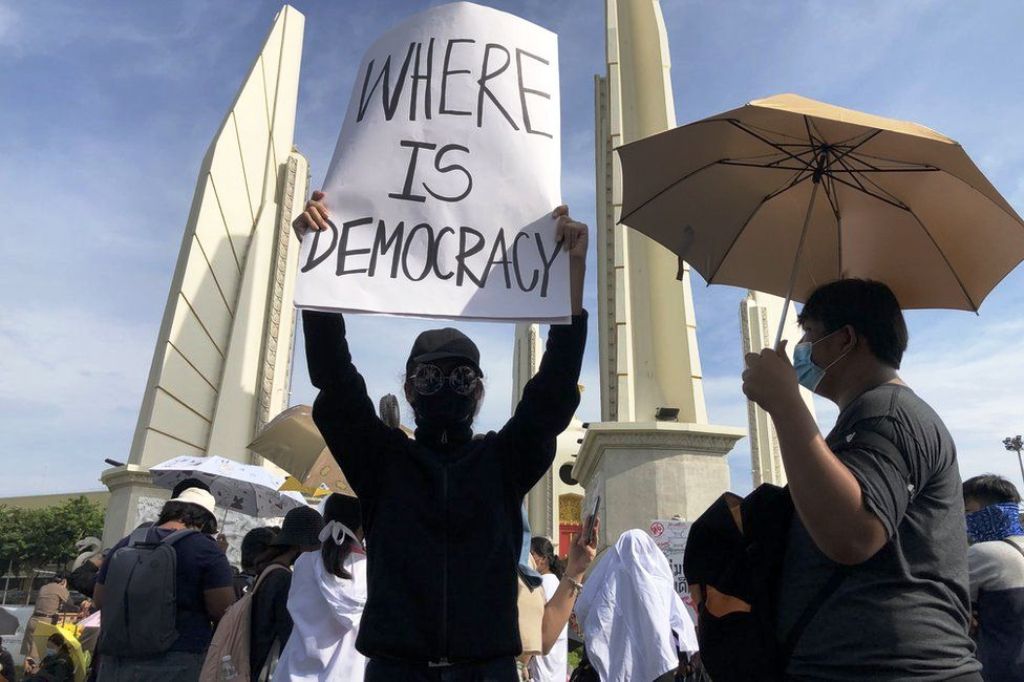 The People’s Movement is threatening to stage a major protest after a bail application for four protest leaders was again rejected on Wednesday by the court.

Parit Chiwarak, Arnon Nampa, Somyos Prueksakasemsuk and Patiwat Saraiyaem are being held in custody on a range of charges, including lese majeste and sedition, after leading a rally at Thammasat University, Bangkok, on Sept 19 last year.

Their lawyer said the Criminal Court had rejected their latest plea for bail, ruling that the Court of First Instance and Court of Appeal had already denied their release and it saw no reason to overrule their decisions.

The People’s Movement immediately announced it would be stepping up the pressure for the four to be released.

The call for a further rally on Saturday came as 18 members of the Ratsadon group reported to public prosecutors to answer charges of sedition arising from protests on Sept 19-20 last year.

Ms Panusaya said she was prepared to go to jail as the odds were that she and the others would be denied bail judging by the court’s decisions to reject the bail application of the four leaders.

In the end, however, prosecutors did not indict them and instead scheduled March 8 for deciding whether to proceed.

Furthermore, a police source told the Bangkok Post there had been a request for 69 groups of crowd control police to handle Saturday’s protest, which is also when the motion of no-confidence in the government will go to a vote in parliament.

The source said the high number of police had been requested to guard important places, including the parliament buildings, to prevent a repeat of the chaotic scenes seen during the anti-government rally last Saturday when many people, including more than 20 police, were injured.

The officers would work in three rotating shifts from today until this Saturday to maintain order. On the planned major rally of the Ratsadon group this Saturday, Ms Panusaya said if she and the other 17 protesters were detained, other protesters would decide whether the rally should relocate from Sanam Luang.

Asked if the next rally would turn violent as it did on Feb 13, Ms Panusaya said the protesters had reflected on what had gone wrong that day and promised there would be better security this time.

Mr Jatupat was the only protester who did not show up as planned on Wednesday — he is taking part in a 247km protest march from Nakhon Ratchasima to Bangkok organised by the “People Go” group to demand the release of the four protest leaders.

A further 13 pro-democracy protesters, including Atthapol Buapat (aka Kru Yai Khon Kaen Por Gun Tee) and Patsaravalee “Mind” Tanakitvibulpon, went to the Office of the Attorney-General on Wednesday to answer for their rally outside the German embassy on Oct 26 last year.

The prosecutors postponed giving a decision until March 25.