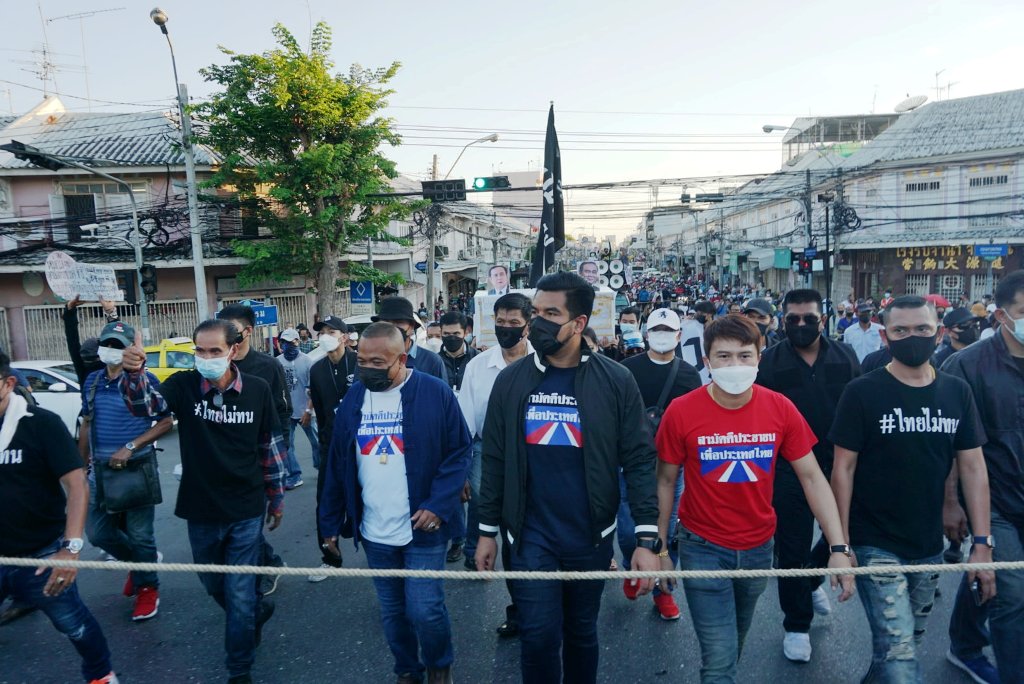 The Thai Mai Thon group, led by former red-shirt leader Jatuporn Promphan, gathered at the foot of Pan Fah Bridge at about 4pm for about two hours, before marching along Nakhon Sawan Road and stopping at Chamaimaruchet Bridge, near Government House.

Meanwhile, the Prachachon Khon Thai group, led by Mr. Nititorn Lumlua, first converged at Urupong intersection, also at about 4pm, and then marched toward Chamaimaruchet Bridge.

The third group, led by political activist Sombat Ngarmboon-anong, mostly motorcyclists and motorists, gathered at the Democracy Monument, before moving toward Government House, as they sounded their car horns as a sign of protest against the prime minister.

Police, however, had installed razor-wire barriers, to prevent the three groups from getting too close to Government House, as crowd-control police and two high-powered water cannons were on standby at Chamaimaruchet Bridge.

Pol Maj-Gen Piya Tavichai, deputy commissioner of the Metropolitan Police Bureau, warned the protesters that they were breaking the conditions of the Emergency Decree and the disease control law, as Bangkok is a COVID-19 maximum controlled and restricted area.

The protesting motorcyclists and motorists were also warned that police could ask a court to impound their vehicles for unnecessarily sounding their horns.

So far, however, the protests have been peaceful.

The Thai Mai Thon, Prachachon Khon Thai and Ratsadon groups had rallied around Government House yesterday, to demand the prime minister’s resignation. The Ratsadon group did not show up  Saturday.