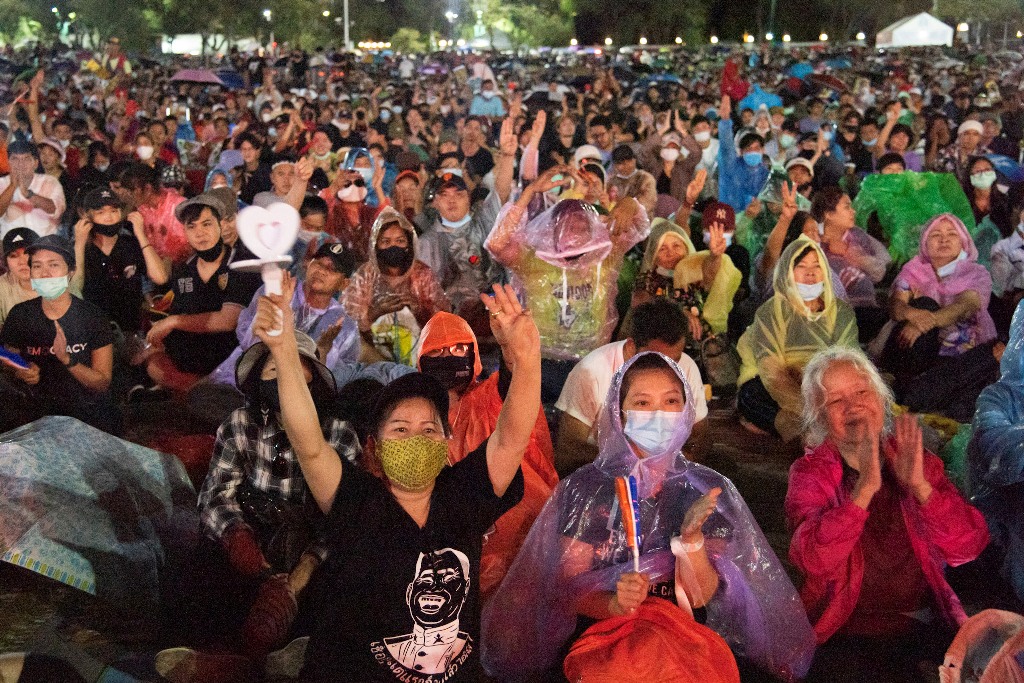 Tens of thousands of people joined Thailand’s biggest protest in years on Saturday, with calls to remove Prayuth Chan-ocha as prime minister. Protesters also called for cuts to the royal budget and changes to the constitution.

“Unless the monarchy is under the constitution, we will never achieve true democracy,” protest leader and human rights lawyer Arnon Nampa told the crowd. The protesters gathered within sight of the Grand Palace in central Bangkok. “More, more,” the crowd chanted after Arnon spoke.

The Royal Palace was not available for comment on the protest or the demands for reform.

“People can protest but they should do that peacefully and within the law,” said government spokesman Anucha Burapachaisri.

Criticizing the monarchy is unacceptable

Arnon said protesters would declare “the country belongs to the people, not the monarchy” and placed a commemorative brass plaque. His speech echoed the words of the leaders of the 1932. The protest upheaval that ended absolute monarchy.

Protests have been building in Thailand since mid-July. Protesters have also broken a long-standing taboo by criticizing the monarchy. As well as seeking a new constitution and elections.

Thai authorities have said criticizing the monarchy is unacceptable in Thailand. The king is constitutionally “enthroned in a position of revered worship.” Article 112 the Lese majeste laws mean those insulting the monarchy can be jailed.

Meanwhile, conservatives in Thailand are horrified by attacks on the monarchy.

“You can drive out the prime minister, but don’t talk about the king,” commented one Facebook user. The speeches were broadcast on Facebook live.

Reuters reporters estimated there were at least 30,000 people in the demonstration. Organizers said there were more than 50,000, while police said there were 18,000. However they were still enough to make it the biggest since Prayuth took power in a 2014 coup.

The military, which proclaims itself the defender of the monarchy and national stability, has carried out several bloody crackdowns on protesters since the end of absolute monarchy in 1932 as well as 13 successful coups.

Sept. 19 is the anniversary of the coup against the populist then-prime minister Thaksin Shinawatra in 2006. Among the protesters were many of his red shirt followers. Veterans of clashes a decade ago with pro-establishment yellow shirts.

“I’m here to fight for the future of my children and grandchildren. I hope that by the time I die, they will become free,” said 68-year-old Tasawan Suebthai, a redshirt with amulets around her neck which she hoped would ward off bullets.

The latest protests have been peaceful so far, but more than a dozen protest leaders have been arrested and released on bail. None has been charged under the lese majeste laws which protesters want scrapped.

They also seek to reduce the king’s constitutional powers and his control over the palace fortune and units of the army.