Thailand Denies "Industrial Use of Monkey" to Harvest Coconuts
Advertisement 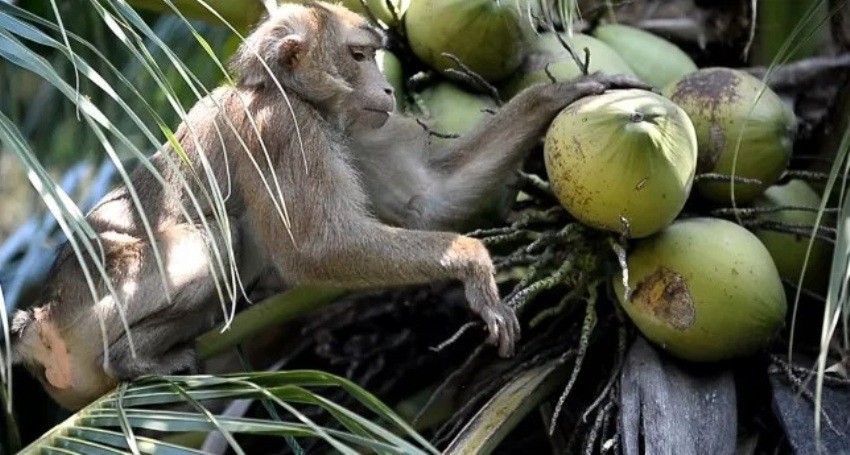 Thailand’s Commerce Minister has come to the defence of coconut farmers saying they not use monkeys to harvest coconuts on an industrial scale. The Minister unequivocally denies accusation made by an activist group.

Commerce Minister Jurin Laksanawisit say accusations made by People for the Ethical Treatment of Animals (Peta), an activist group, which claimed the monkeys trained by Thai farmers to harvest coconuts are often abused.

Peta has called for a boycott of Thai coconut products.

He admitted that at one stage farmers did train monkeys to harvest coconuts. They still do, the minister said, but only on a small scale as they are intended as tourist attractions.

The Commerce Minister said he plans to invite foreign diplomats to observe how the harvesting is done. Furthermore to show them that no monkeys are mistreated in the process.

“Coconut-picking by monkeys on an industrial scale no longer exists in Thailand,” he stressed to reporters at Don Mueang International Airport on Monday.

The minister said he will meet with coconut growers and producers at Government House later today to discuss ways to resolve the misunderstanding and reassure importers.

Peta called for a boycott of Thai coconut products after it accused Thai farmers of snatching pig-tailed macaques from the wild to be used as “coconut picking machines”.

The animal rights group claimed that each macaque is forced to pick up to 1,000 coconuts a day, and the allegations has driven major Western retailers to pull Thai coconut products off their shelves.

“Following Peta Asia’s investigation, more than 15,000 stores will no longer purchase these brands’ products, with the majority also no longer buying any coconut products sourced by Thailand’s monkey labour,” the group said on its website.

Peta’s claims have been rebutted by Thai netizens on social media. One of them said he would agree with the United Kingdom’s move to ban Thai coconut products to protect animals’ welfare as long as it does not discriminate.

If Peta thinks using monkeys to pick coconuts is animal cruelty, it must also boycott dairy products, as they are also produced in a cruel way, he reasoned.

Mass communication expert, Seri Wongmontha, on Monday posted on Facebook, wondering if the UK considers the use of animals in circuses, sports, and laboratories as abuse.

The minister said the allegation has hurt the sales of Thai coconut milk in the European Union (EU) — especially sales to European-owned businesses. Some 70% of Thai coconut milk exported to the UK is distributed at supermarkets, restaurants and hotels operated by Asians.

Thailand’s coconut milk exports are worth around 12.3 billion baht a year — from which 2.25 billion baht, or 18%, comes from the EU. The UK accounts for about 8% of the 2.25-billion-baht figure.

Use of monkeys to gather coconuts

“Two years ago, EU trade representatives opposed the use of monkeys to gather coconuts in Thailand. But they later realized that it was not animal abuse as claimed by some organization,” the Bangkok Post reported.

Niran Wongwanit, 52, a coconut farmer and a monkey trainer in Surat Thani, said Peta’s campaign to boycott Thai coconuts was not fair to Thai farmers. Saying that the use of monkeys in harvesting is a practice which dates back more than 100 years.

Mr Niran said before they had the monkeys, growers would climb up the coconut trees themselves. However, as most people aren’t as efficient at the work as monkeys and climbing such tall trees poses a risk to the farmers, they began taking in monkeys from the wild.

“These days, the monkeys are bred. Once they reach a certain age, they are trained before they are sent to coconut farms across the country,” he said.

PETA is an Example of “Liberal Activism Gone Wrong”

Righteousness is not the same thing as being right and a high-profile organization on the left is the poster child for what’s wrong in activism today.

PETA with its headquarters in Norfolk, Virginia, the People for the Ethical Treatment of Animals was founded in the 1980s to focus on animal issues. By demonstrating and at times performing nefarious and outrageous activities to make their statements.

Unfortunately, a lot of PETA’s efforts have been misguided, ill-informed and, on certain occasions, potentially illegal.

While PETA as an organization makes it its business to attack private enterprise as evil and lacking transparency. The group has been trying to hide a few secrets itself. Would it surprise you to learn that PETA operated a kill shelter?

Indeed, PETA killed most of the animals at its Norfolk, Virginia, shelter and headquarters in 2014, according to the Virginia Department of Agriculture and Consumer Services. That year, PETA euthanized 2,454 of its 3,369 cats, dogs and other animals — a 72.8% kill rate.