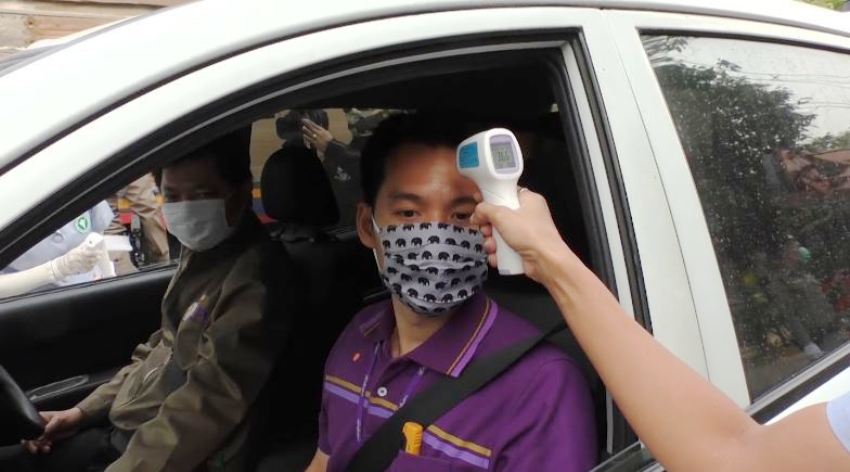 Thai police have set up 359 checkpoints on roads around the country as part of the state of emergency measures to contain Covid-19.

Police officers have been dispatched at checkpoints to mainly conduct health screening and intercept smuggling of controlled goods, according to security officials. Motorists are checked for fever and on whether they follow health instructions.

National police chief Pol General Chakthip Chaijinda said the operation would cause inconvenience to motorists. Furthermore he hoped for understanding and cooperation. Anyone found to have fever over 37.5 degree Celsius would be taken for mandatory health check at hospital, he said.

Police officers at these checkpoints may also take travel records and other information from drivers and passengers.

In Chiang Mai six checkpoints have been sent up around all major roads in from Lampang, Mae Hong Son and Chiang Rai.

The police also said that rumors that anyone not wearing a mask will be fined Bt200 is simply not true. Furthermore the rumor that people are not allowed to travel between provinces, is also untrue. However they also urge people not to travel at this time.

Citizens will be asked about their health status if they are believed to be infected they will be quarantined.

The police checkpoints have been set up after the government has declared state of emergency. In order to enforce tougher measures to control the coronavirus outbreak.

Prime Minister Prayut Chan-o-cha has announced to exercise a State of Emergency decree on the public in emergency situation to control COVID-19. The state of emergency was set to continue until April 30th, 2020.

He said that the shops that sell essentials would remain open. Furthermore that emergency measures might affect people’s life at some degrees.

He warned that the people who were taking advantage of others during the time of hardships would face decisive legal action. Information distortion and access to some venues would also be banned.