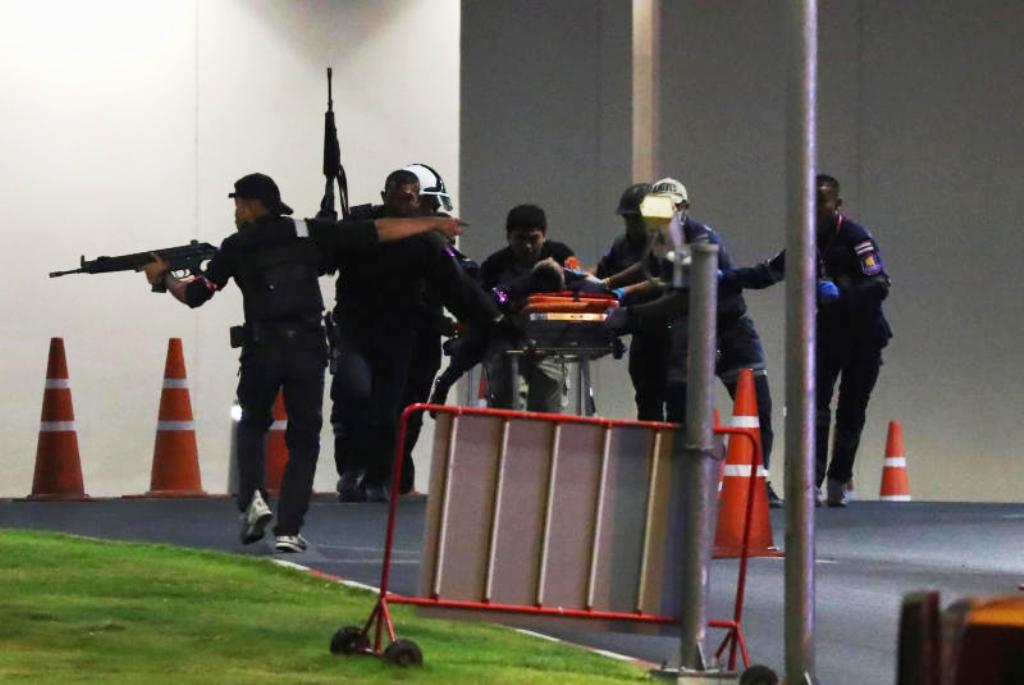 UPDATE: The dramatic siege at Terminal 21 shopping mall in downtown Nakhon Ratchasima is over after the gunman was killed in a gunfight with police this morning.

Police and soldiers have rescued hundreds of people from a shopping mall as they hunt for a Thai soldier who was held up inside after killing at least 25 people.

The carnage began around 3.30pm yesterday when the Thai soldier shot dead his commander and two others at an army base. The soldier then stole weapons and ammunition and fled in a army Humvee, he also stole.

The Thai soldier then fired at civilians along the route to the Terminal 21 shopping mall. The mall was packed with shoppers celebrating the long weekend. According to the Bangkok Post many more people were slain inside the mall. where the gunman live-streamed the mayhem on Facebook Live before his site was shut down.

A Defence Ministry spokesman said late Saturday that 20 deaths had been confirmed. Another 31 people were reported injured, some seriously.

Authorities said on Sunday that four more bodies were found on the G floor of the shopping centre. The 4 deaths brings bringing the total body count to 25.

Thai news outlets have reported gunfire being exchanged at 3.30am on Sunday. The gunfire led to the death of a police officer and injury of two other police officers. They were shot by the Thai soldier with an M60 machine gun.

Bringing the death toll from the deranged Thai soldier to 25 with the number of injured increasing to 33.

Officers who stormed the building late Saturday urged the gunman to surrender but they were met with angry shouts and more gunfire.

The attacker then fired at a cooking gas cylinder, setting off an explosion and fire. Video clips showed people running away and cowering behind cars as thunderous shots rang out.

Troops from a special warfare unit were dispatched to the mall, where the attacker was said to be holding 16 people hostage on the fourth floor.

Police Crime Suppression Division commandos arrived from Bangkok by helicopter. Police have also brought in the Thai soldiers mother from Chaiyaphum province. Above all in hopes that she can persuade him to surrender.

The army has also asked media outlets to stop providing live coverage in order to avoid giving the suspect information. The National Broadcasting and Telecommunications Commission also warned that smartphone videos being streamed by people inside the mall were a potential threat to security operations.

The Thai soldier also streamed his earlier activity at the mall on Facebook Live. He posted a selfie showing him holding a rifle. “Tired, I can barely move my fingers,” he said.

“Our hearts go out to the victims, their families and the community affected by this tragedy in Thailand. There is no place on Facebook for people who commit this kind of atrocity, nor do we allow people to praise or support this attack,” a Facebook representative said in a statement.

The slain commander has been identified as Col Anantharot Krasae, 48. With whom the Thai soldier was reported to have had a conflict. A 63-year-old woman was also killed at the camp, along with another Thai soldier.

Security officers laid siege to the shopping mall Sunday morning. Crowds of people donated blood at local hospitals in response to health authorities’ request to save the injured.