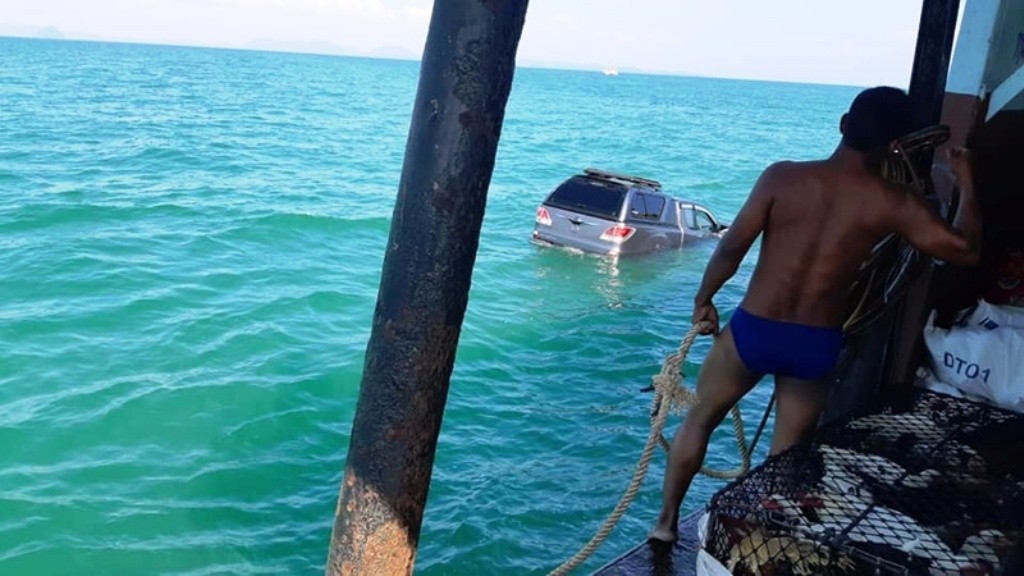 An unsecured pickup truck has rolled off an inter-island ferry after leaving Phangnga Island for Phuket, Wednesday afternoon. It quickly sank and remains on the seabed of the Andaman Sea.

The owner of an inter-island ferry has already agreed to compensate the owner of a pickup truck.

Wiwat Chidcherdwong, the Phuket Marine Office chief, said on Thursday the ferry owner, had agreed to pay damages to the pickup’s owner.

Mr Wiwat said the pickup truck owner did not apply the hand brake after parking it on the ferry at Koh Yao. The boat crew also forgot to secure it with deck blocks, he added. Crew members try unsuccessfully to salvage the floating pickup truck after it entered the sea, however it sank.

Pol Col Prasert Srikhunrat, the Marine Police also report that the rough seas may have tipped the vehicle from the deck. The pickup is still on the seabed, with a buoy attached to it warning all boats to keep clear.

Meanwhile, a 64-year-old Singaporean man was found dead inside a house in Thalang district of Phuket.

Police were called to Yucharoen housing estate in tambon Srisunthorn by neighbours who found the man dead. The man was his bathroom, Phuket Police said.

The man’s name was withheld pending notification of relatives.

Phuket Police said there were no bruises on the man’s body and believed he been dead for at least 3 days. They also found his will in the bedroom, according to the Bangkok Post.

A neighbour, who lives opposite, told police she had taken the man some food and chatted with him on Monday. On Thursday, she went to his house again but there was no response to her knocking.

She heard water running inside the house and called her husband to help her check. They found their Singaporean neighbour lying dead inside the bathroom.

Police suspect he died of some unspecified illness.