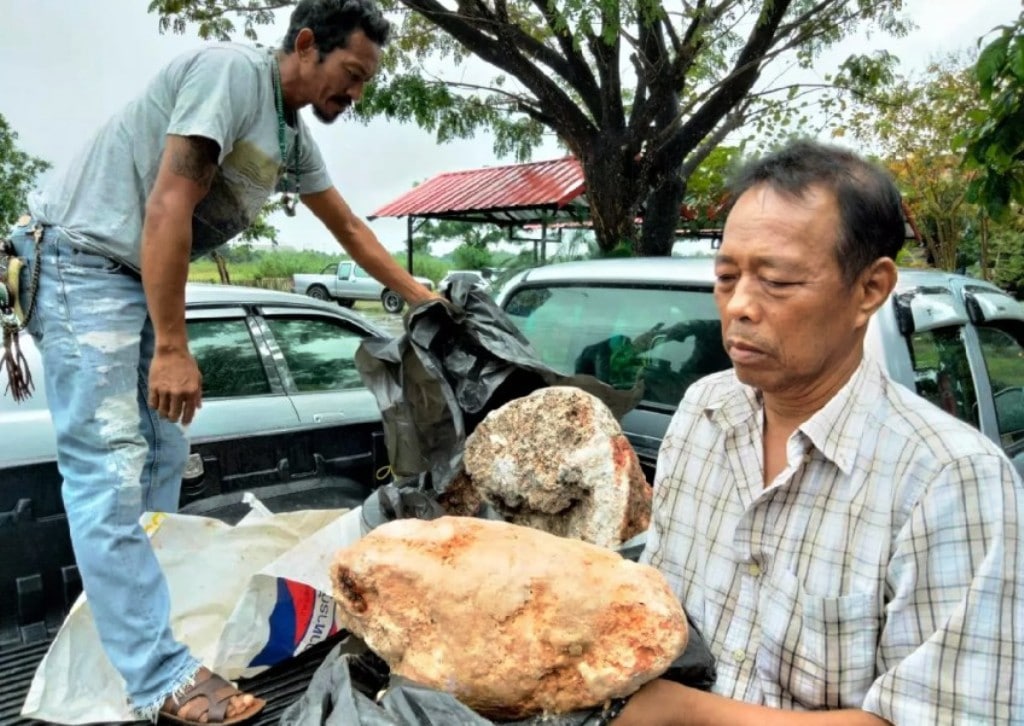 It could’ve just been a large rock, but something told Narit Suwansang that he had found something more he had whale puke. Whale puke (Ambergris) is not gold, but it might as well have been.

According to Thai news, the plain yellow-beige rock which Suwansang found lying innocently along a beach in Nakhon Si Thammarat on Nov 26 turned out to be Ambergris (whale vomit). And before anyone starts gagging, that stuff’s pricey.

Ambergris, or whale puke really, is formed when a sperm whale throws up and its bile floats along the ocean till it washes up on shore as a hardened chunk. It’s used mainly in luxury perfumes as a fixative to help the scents last longer.

And considering the difficulties that come with finding naturally occurring ambergris, it costs a fortune — a businessman has already offered Suwansang a whopping THB960,000 (S$42,600) per kg for the rock if it turns out to be certified Grade A ambergris.

The chunk reportedly weighs a hefty 100kg, the heaviest piece of ambergris found in history. If the deal goes through, that makes the 60-year-old an overnight millionaire.

Considering how he brought the mass home on a whim — and that he could only confirm that it was whale barf after it melted in close contact with a flame and gave off a musky smell — that’s a pretty lucky find.

Meanwhile, Suwansang is currently awaits experts’ confirmation on the grade of his ambergris chunk, though he plans on registering his find with the police in the meantime, just in case it gets stolen.

“I want to know more about this ambergris,” he told Asia One. “Please find out what kind of whale puke I found.”

This isn’t the first time a Thai local has struck lucky. Just earlier last year, another man found a chunk of whale spew that weighed 6.5kg, worth a total of THB10.5 million, while yet another found another piece that weighed 16kg and was worth THB20 million.