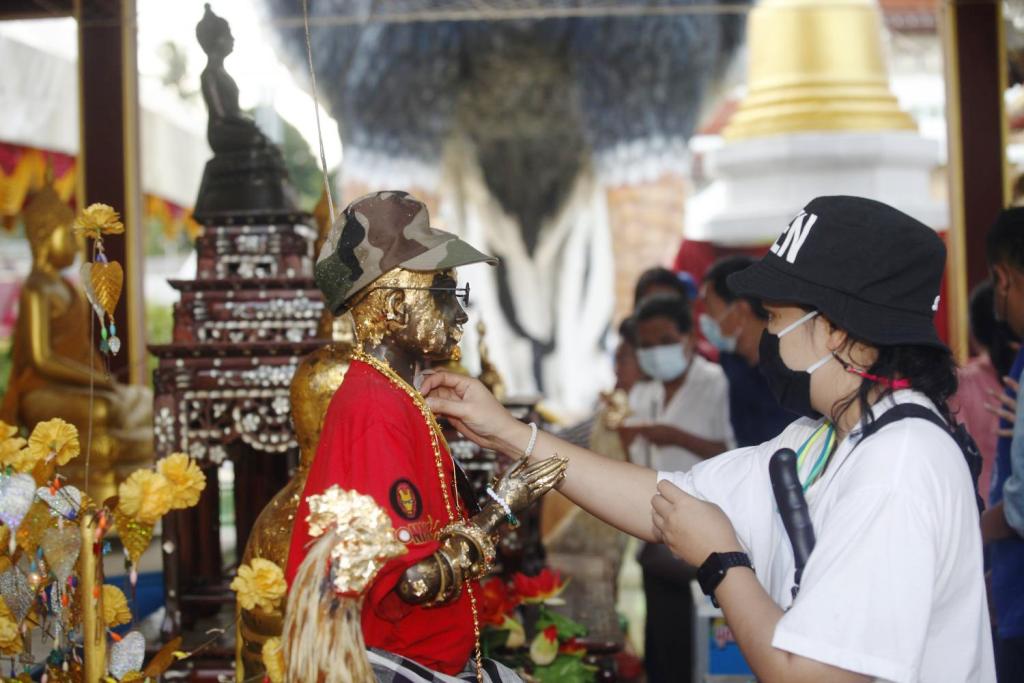 In Nakhon Si Thammarat, Southern Thailand people are flocking to Wat Chedi temple to pray to a benevolent spirit Ai Kai “Egg Boy.” Ai Kai is believed to be the spirit of a boy around nine or 10 years old who grants you wishes.

The miraculous power of Ai Khai “Egg Boy” has worked magic for the economy of this southern province battered by the protracted Covid-19 crisis.  Ai Khai, has attracted almost 1 million visitors to his shrine at Wat Chedi temple in Nakhon Si Thammarat, since Thailand emerged from its coronavirus lockdown in July.

While most other parts of Thailand are still in the economic doldrums, tourists are streaming into this province hoping to be blessed by the gold-plated statue of the boy monk.

The phenomenon coincides with a period of economic and political turmoil in Thailand . The government has been promoting domestic tourism to support an industry that is normally the backbone of the Thai economy but has been badly damaged by the pandemic.

Meanwhile, the capital has been rocked by student-led protests calling for political reform, including rewriting the constitution, holding new elections and curbing the influence of the kingdom’s monarchy.

Some analysts, as well as social media posters, have lamented the Egg Boy fad as a superstitious response to the unrest on both fronts.

Although the number of visitors to the shrine at Wat Chedi falls far short of the almost 40 million foreign tourists the country welcomed last year. The influx has turned the once-sleepy seaside town into a bustling tourist magnet. Offering the industry as a whole hope of recovery.

Thailand has allowed no foreign visitors since it closed its borders to non-nationals in April.  The government approved the entry of long-stay tourists a move welcomed by tour operators and hotels across Thailand.

This might be good news for the once booming tourism hotspots of Phuket, Krabi, Pattaya and Chiang Mai, but Nakhon Si Thammarat seems content to rely on the legions of locals coming to see Egg Boy. Who apparently excels at generating revenue as well as granting wishes.

“We expect that by the end of September, 800,000 visitors will have made the trip here, garnering over 800 million baht [US$25.2 million] in revenue.” said Pitsinee Tatniyom, provincial director with the Tourism Authority of Thailand. “There have been some 400,000 visitors already in September alone.”

Nakhon Si Thammarat “is being lit up”, she said, thanks in large part to the intertwining of religion and tourism in what she referred to as “faith marketing.” Whereas the province’s airports used to accept about a dozen flights each day from elsewhere in the country. That number rose to 50 by the end of September.

With about 10,000 visitors every day during the week, rising to 25,000 per day on the weekends, Wat Chedi has recorded a surge in revenue. Above all from donations and the sale of items such as Egg Boy amulets. Also pieces of holy cloth with prayers from Buddhist monks. Hundreds of people often queue through the night to get their hands on the items before they sell out.

Believers pray to the Ai Khai “Egg Boy” statue in the temple and if their wish is granted, they usually return to perform kae bon. Its thanksgiving ceremony which often involves firecrackers and more donations.

Even those who do not visit the shrine sometimes have their wishes granted, according to Benjapop Benjathammatorn, owner of the nearby Sichon Cabana beach resort.

“One of my customers lost a necklace at the beach and after praying to Ai Khai “Egg Boy” for help, the necklace was found the next morning,” he said.

The local tourism industry is thriving, with many businesses welcoming repeat customers as well as those who have been urged to visit by friends or relatives.

Leng Khanom, who works at an Ai Khai “Egg Boy” amulet shop in Nakhon Si Thammarat, said the trinkets can fetch as much as 100,000 baht (US$3,155) depending when they were made – the oldest, dating back to 1983, are usually the most expensive.

According to local legend, the temple at Wat Chedi is hundreds of years old but it had been reduced to a pile of ruins until it was rebuilt about 60 years ago.

Egg Boy’s reputation has now grown to the point where a statue has been erected in other provinces and his amulets are also reproduced elsewhere. Prompting the abbot of Wat Chedi in September to obtain the copyright for the various items the temple produces and sells.

One Twitter user asked: “Registering for Ai Khai copyrights means the spirit is completely commercialized. Shouldn’t the temple be scrutinized?”

Other criticisms of the Egg Boy shrine include the questionable morality of exploiting people’s faith to make money, and the dismissal of the craze as mere superstition.

“#AiKhai says how desperate the people in this country are with the daily grind that they have to ask for money from leaves and trees,” another Twitter user wrote. “Is politics not involved?”

Phra Maha Paiwan Warawanno, a monk and social critic, said the Ai Khai “Egg Boy” fad will eventually fade. “This sort of popularity is superficial as we have seen from the previous phenomena in Thailand,” he said, pointing to other once fashionable items such as Jatukham Rammathep amulets, believed to provide protection and good fortune, or the Luk Thep baby dolls believed to be possessed by auspicious spirits.

“It is human nature to want to have hope and holy items are an accessible source of hope. But in the long run, the roles of temples can be distorted. Temples should provide people with intellect and an ability to see things with reason.”

Pipad Krajaejun, a history lecturer at Thammasat University, noted that Ai Khai Egg Boy’s tourism fame had coincided with the coronavirus pandemic “which caused the economy to crash and people to lose hope”.

According to Pipad, Ai Khai’s popularity reflects a society where wealth has grown increasingly concentrated among Thailand’s elite, curtailing the prospects of regular Thais.

“Thailand has to remodel its political and economic structure to allow people to acquire well-being and opportunity in order to be less attached to praying for wealth and materialism,” he said.