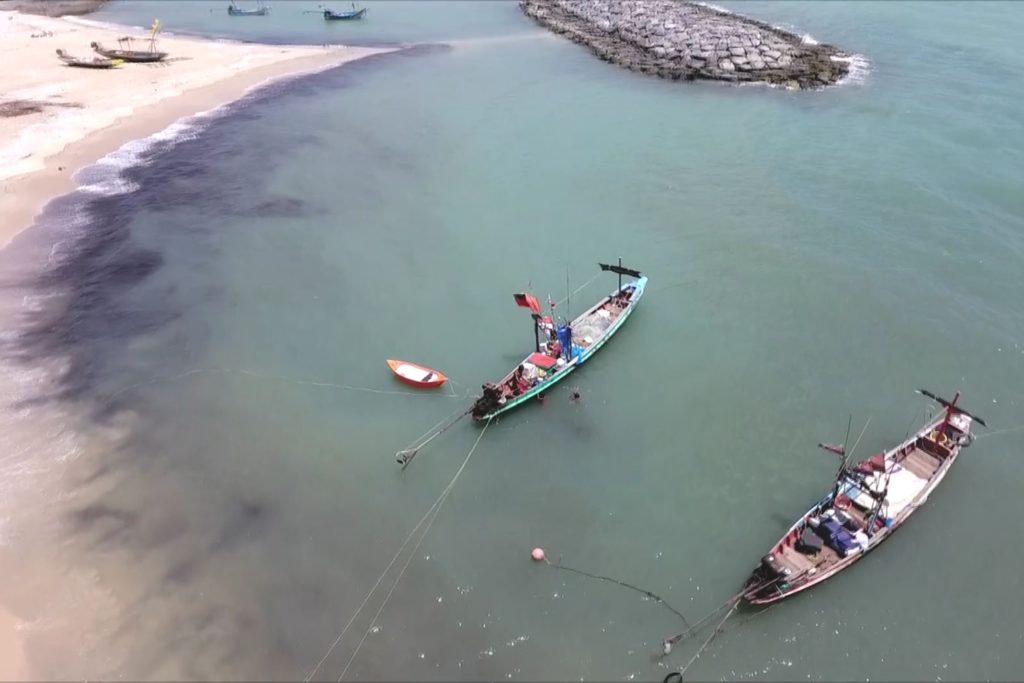 On Sunday morning, following a storm, a large quantity of tar balls were seen scattered all over the beach. While the sea was still darkened by the oil slicks. The situation has prevailed for over a month without any concrete actions taken by concerned government agencies.

Local fishermen said marine life formerly seen in abundance has disappeared. Many dead fish were seen lying on the beach.

The pollution has gravely affected the eco-system

A fisherman said he paid about 30,000 baht for a new net to catch squid, but has made almost no return on his investment. He told the Bangkok Post he has offered to sell it cheaply to cut his losses.

Aiyub Aziz, a fisherman of Moo 7 village in tambon Na Saton of Hua Sai dstrict, said it is still not clear where the tar balls and oil slicks were from although some officials have come to collect them for testing. Whenever there is a storm, more tar balls are washed ashore. “We have been left in the dark,” he said.

Oil floats on the ocean surface

Tar balls are dark-colored, sticky blobs of oil that occur when crude oil floats on the ocean surface. Changing its physical composition in a process called “weathering.”

After an oil spill or naturally-occurring seep, the oil spreads into a thin slick. Wind and waves break the slick up into small patches, or tar balls, that scatter into the ocean.

Initially, the lighter components of the oil evaporate or dissolve in the water. Leaving behind the heavier types of oil, like crude. The crude then mixes with saltwater to create a thick, sticky substance.

New tar balls appearing on the beach, especially in large numbers, might indicate an oil spill. The oil may have also come from ships who pump their engine holds into the ocean.

Tar balls are generally coin-sized, but can be bigger, forming “tar patties” that are the size of pancakes.

They are often “hard and crusty on the outside, soft and gooey on the inside. Fresh tar balls can have the consistency of molasses. The hotter the air or water, the stickier the tar ball.