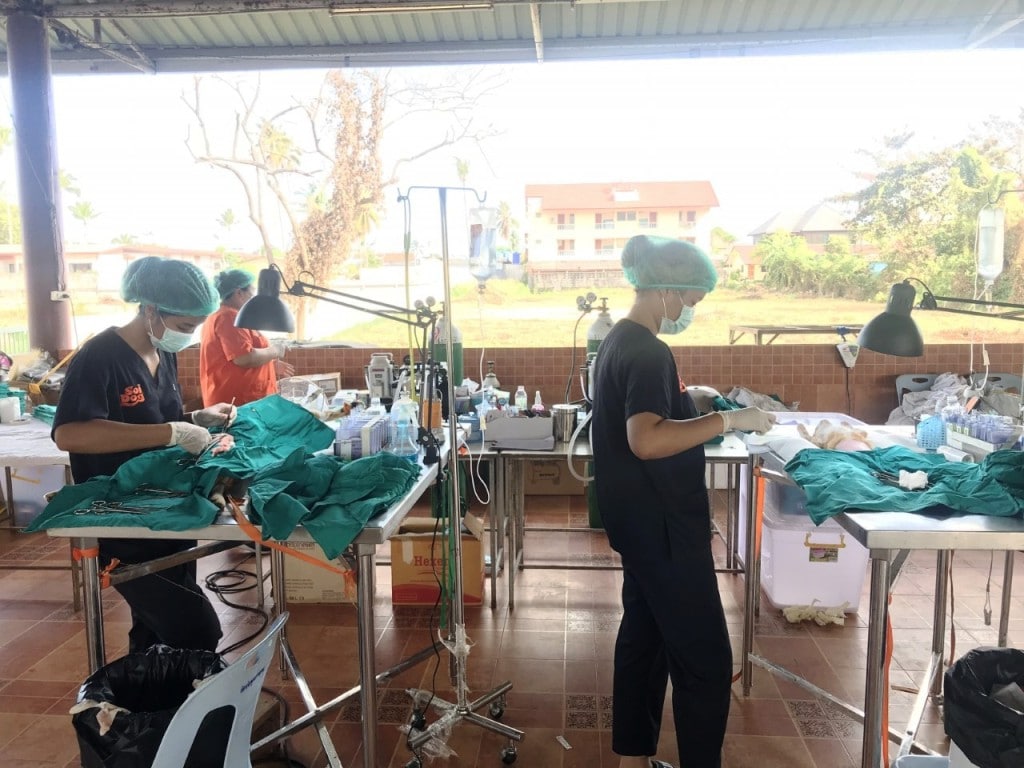 Soi Dog Foundation has set up a mobile sterilization and vaccination clinic on Koh Samui in collaboration with Koh Samui Municipality and local animal rescue groups. Together, they aim to neuter and vaccinate 6,000 street animals on the island as part of a project that’s scheduled to run until July 21.

The clinic is currently located at Wat Bo Phut until March 3 and will resume between March 9-31. It will then move to Wat Si Thaweep between April 6-28 and May 4-26. Finally, it will move to Wat Samret between June 1-23 and June 29-July 21.

Animal rescue officers will survey and pick up street dogs and cats from across the island before bringing them to the mobile clinic for sterilization and vaccination.

Pet owners and street animal feeders are invited to bring their dogs and cats to the clinic too. Dogs must weigh at least 3kg, and cats must weigh at least 1kg. Owners and feeders are also asked to withhold food from the dog or cat after midnight the night before their sterilization surgery for the animal’s safety. All animals will receive cost-free care; however, donations are gratefully received and will go directly towards Soi Dog’s work to improve the welfare of street animals in Asia. Soi Dog previously held a mobile clinic on Koh Samui between 2017 and 2018, neutering and vaccinating a total of 8,013 animals. However, since the outbreak of Covid-19, the street dog and cat populations there have increased sharply, and the foundation is receiving a growing number of reports concerning sick, injured and abandoned animals on the island in urgent need of help. Many had owners or feeders who have lost their income amidst the pandemic and subsequently left the island.

In November last year, Soi Dog met with Koh Samui Municipality and local animal rescue groups to discuss how each organization could best contribute towards helping animals in need and sustainably reducing the street dog and cat populations as a whole. Soi Dog explained that, if the island is to control these populations long-term, a programme of CNVR (Catch, Neuter, Vaccinate, Return) must continue after the joint project ends in July.

CNVR is at the very forefront of Soi Dog’s operations and is proven to be the most ethical and effective way of managing the street dog and cat populations. The foundation recently celebrated half-a-million street animals neutered through its CNVR program since 2003 – more than any other organization in the world.