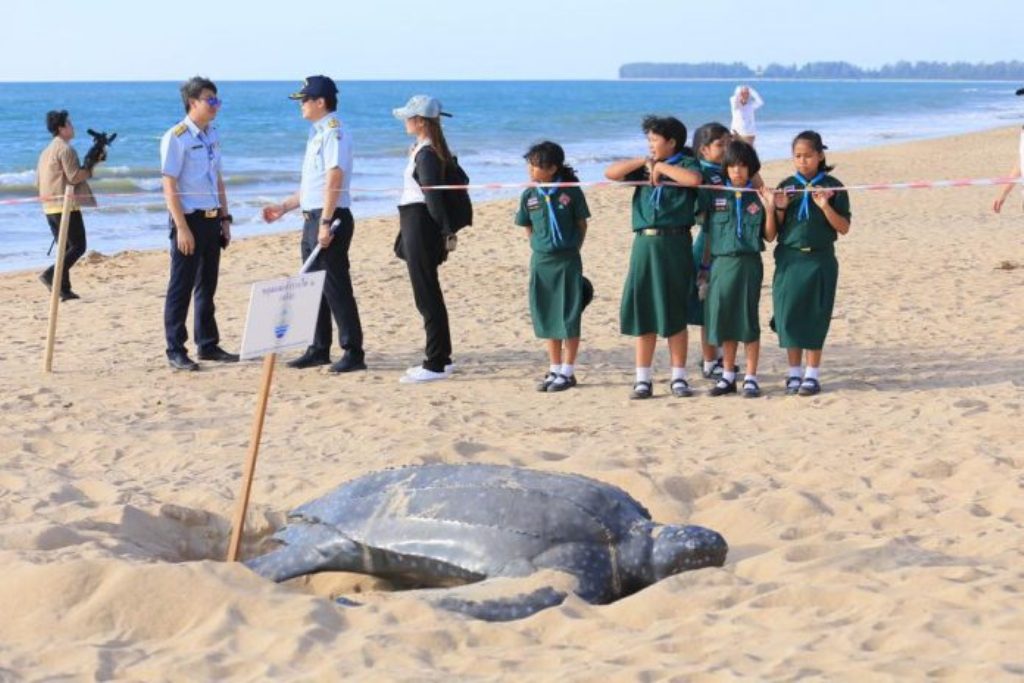 Concerned officials in Phuket have built a fence to a restricted area at Mai Khao Beach to protect leatherback sea turtle eggs. The fence was constructed by army personnel for the marine department.

Officials of the Department of Marine and Coastal Resources and army personnel rushed to the beach Friday after learning from a village headman that a sea turtle was found to have laid eggs at the beach.

The area is located inside the Sirinart Marine National Park and about one kilometer north of Phuket’s Airport.

Officials built the fence and set up guards to look after them. It is the third nest that leatherback sea turtle eggs were found on this resort island.

Three weeks ago, officials at Khao Lampee-Haad Thai Muang National Park, in the southern province of Phang-nga, were overjoyed after the first baby leatherback turtle hatched. The little turtle emerged from its nest onto the beach.

According to officials, the baby leatherback turtle was spotted climbing out of its nest at 6.20am. The baby turtle was then taken to a nursery to be nurtured, before being released back into the sea.

Park officials have also been keeping a close watch on the nest, waiting for more baby turtles to emerge.

A total of 104 leatherback turtle eggs were found at a nest on the beach. They were discovered outside the territory of the national park on November 17th. Eighty five of them were found to be viable and were consequently taken to another nest within the park’s territory.

In March of last year 40 rare leatherback turtles emerged from their shells and headed out to the Andaman Sea off Phangnga beach. The baby turtles were born in one of three nests found in this southern province. Its also the first time in five years that turtles returned to lay eggs there.

Leatherback turtles are named for their shells which are softer than most other turtles. Furthermore they are the largest sea turtle species. They’re also one of the most migratory, and sometimes cross both the Pacific and Atlantic oceans. They are classed as a ‘vulnerable’ species with a declining population.