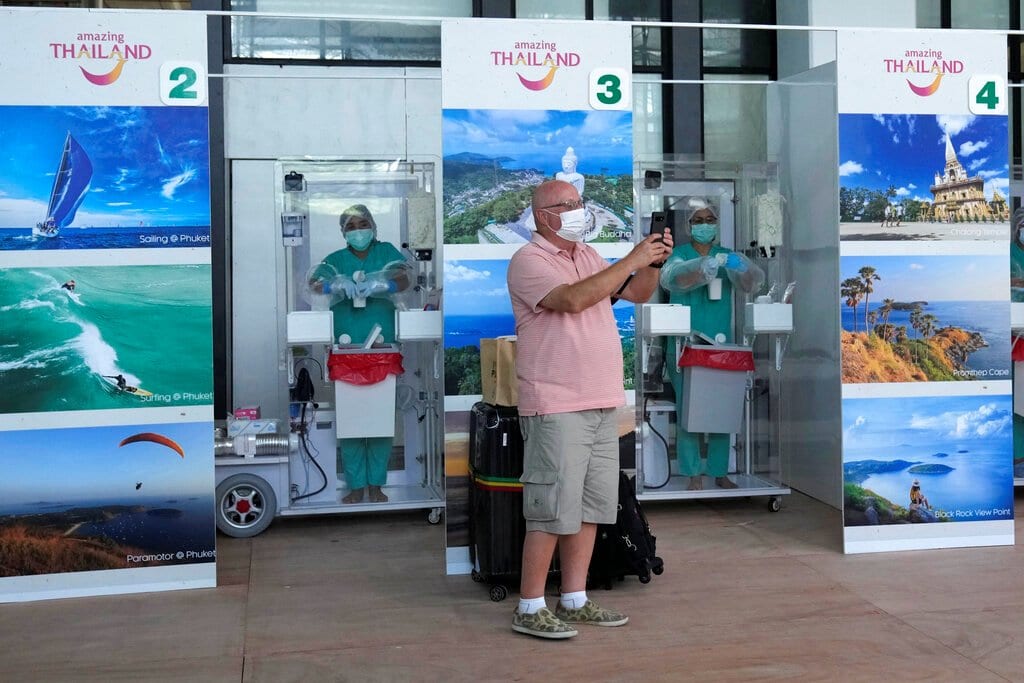 Tourist who arrived under the Phuket Sandbox program that have completed their 14 day stint are now being told to stay put and not go elsewhere in Thailand due to new Covid-19 restrictions.

Phuket governor Narong Wunsiew said he would discuss with the Centre for Covid-19 Situation Administration the possibility of sending tourists under the sandbox tourism scheme to Bangkok by bus after domestic flights were suspended due to covid-19 travel restrictions.

“The sandbox scheme began before a surge in coronavirus cases. Those who have stayed here for 14 days and want to return to their countries can fly back home bu there are no flights to pick them up.

“However, those who have stayed on the island for 14 days and want to visit other provinces could not do so in the wake of the Covid-19 outbreak. Each province has followed Covid-19 restrictions imposed by the CCSA. We will raise this issue for discussion with the CCSA to find ways to help them,’’ the governor told the Bangkok Post.

Nanthasiri Ronsiri, director of the Tourism Authority of Thailand’s Phuket office, said the tourism office would consult with the Phuket governor and the provincial transport office on how to help the tourists who wanted to go elsewhere.

For its part, the tourism office wants them to continue to stay in Phuket. Many tourist programmes have been offered, said Ms Nanthasiri.

If they want to return home, vehicles would be arranged for them and Nok Air would provide flights and pick them up, she said, adding that the airline was willing to fly empty flights to the resort island.

Provincial authorities have discussed with the Civil Aviation Authority of Thailand, which said flights would leave Phuket to U-tapao from Aug 3 to Aug 5, said Ms Nanthasiri.

Private operators in Phuket have arranged a 12 hour bus services to take the tourists to Suvarnabhumi airport during Aug 4-16. The bus services, which charge 1,500 baht each, will be provided only on Mondays, Thursdays and Saturdays.

As of Monday, 15,169 tourists visited Phuket under the sandbox scheme, which began on July 1, bringing in revenue totalling 818 million baht, said Ms Nanthasiri.

By nationality, the Americans made up the largest group, followed by the visitors from the United Kingdom, Israel, Germany and France, respectively. They each spent 50,000 baht on average per trip and stayed 11 nights at hotels.