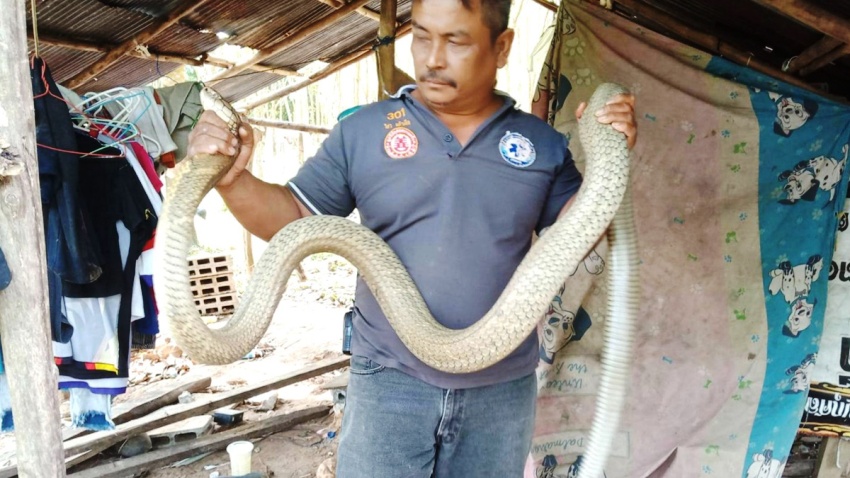 A man in southern Thailand was completely terrified after laying down a for nap only to discovered he was being watched by massive king Cobra. The venomous king cobra was 5 meters in length and weighed over 10 kilograms.

A special rescue team in Trang Province was notification of the extremely long King Cobra in the villager’s hut. The hut was located in a rubber farm, where cobras and other poisonous snakes are often found.

This specific rescue team is experts in catching King Cobras. People have nicknamed them “Venomous snake hunters” in Thai. The team arrived to find Pricha 42 years old the owner of the rubber farm, still in shock. Pricha showed the team the snake on the ceiling.

The team went into action and using their snake catching equipment, pull the snake down. When the snake was on the ground one of the team members grabbed it by the head and brought it outside.

They measured the dangerous king cobra snake and turned out to about 5 meters long and weighed over 10 kilograms. At this size, the snake can basically look you in the eye. The king cobra has the ability to raise their body up from the ground when in attack mode.

Mr. Pricha told Thai media the snake catchers that he just finished work on the farm and decided to come to take a nap. While he was trying to fall asleep he looked up at the ceiling and saw an extremely large snake staring back at him.

The venomous snake was looking for water

Above all with its tongue moving in and out of its mouth. He became extremely frightened and didn’t dare to move a muscle. He said in a flash he jumped out of the cot and ran outside.

According to the rescue workers due to it being very dry, snakes will look for water sources that are often nearby homes. It’s also currently mating season for snakes and they’re on the hunt for love. The team has caught over 20 King Cobras within these 2 months in Southern Thailand’s Trang Province.