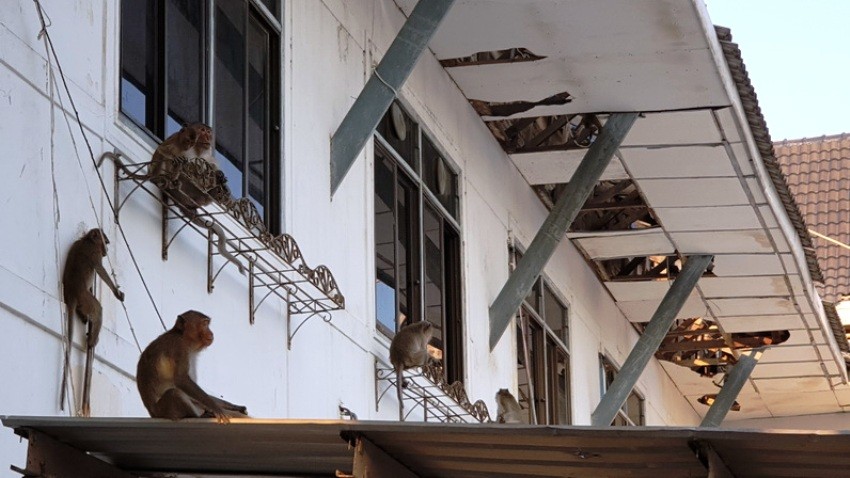 Local officials in Southern Thailand have reported that a gang of Monkey’s have overrun an old Town hall building forcing staff out. The Monkeys invasion in Prachuap Khiri Khan Province forced government officials to moved to another building for work.

The monkeys have destroyed the building and officials had no choice but to move the office to somewhere safe. The old town hall building is located about 100 meters away from the Khao Chong Krachok mountain. The monkeys first took over the famous attraction and started expanding their reach to the old town hall. City officials believe that since there are no tourists and the monkeys are searching for food.

Town Hall has been ripped apart by monkey’s

The monkeys have torn apart the roof, electric wires, the ceiling, lights, and also office equipment. The officials working in the building couldn’t take dealing with the monkeys any more and had no choice but to find and rent another building to make it into a temporary office.

Upon inspection, some parts of the ceramic roof tiles have been ripped off of the building. The same roof tiles were used to break the new town hall windows. Inside the building ceilings are gone and you can also see the sky from inside.

The monkeys also smashed the light bulbs inside the offices. The building is now locked with a sign stating the offices have been temporarily moved.

The monkeys have also vandalized citizens and officials vehicles parked in the area. They mainly tear off the rear-view mirror and search the vehicles, Thai media reported.

Furthermore every evening the monkeys continue to enter the old town hall and do more damage searching for food.