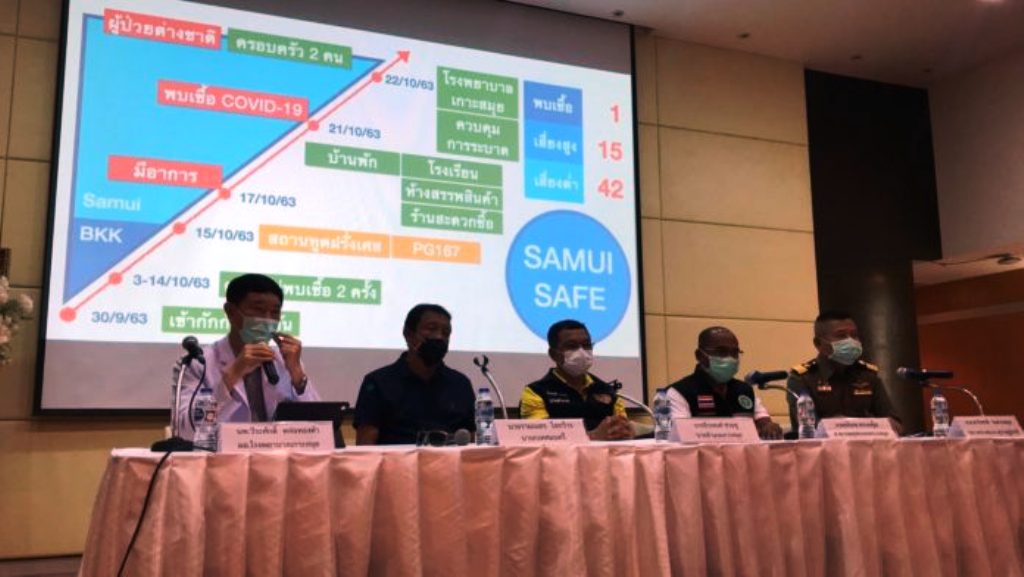 The director of Koh Samui hospital reported Friday that the French woman in hospital after she tested positive for Covid-19. Her husband and son were also being monitored by health authorities. Dr. Veerasak Lorthongkham said the French woman and her family, were quarantined for 14 days prior to returning to Koh Samui on Oct 15.

The Family from France have a home on Koh Samui, arrived in Bangkok on Thai Airways International flight TG933 from Paris on Sept 30.

Dr Veerasak said the woman stayed in her house and wore a face mask whenever she went out in her car.

He said the French woman developed a fever on Oct 17 and decided to stay home before going to a private hospital for a covid-19 test on Tuesday. The result on Thursday was positive, Dr Veerasak added.

Thailand’s health Authorities are still trying to determine if the woman became infected while in the country.

Public health officials have since conducted covid-19 tests on 15 people deemed to be high-risk. They have also isolated them until the results are known. They are monitoring another 42 people believed to be at low risk.

The Disease Control Department posted a Facebook message saying the high-risk group included the woman’s family members; 10 passengers and two crew on the same flight; and a friend who picked the family up at Koh Samui airport.

The woman’s case was not included in the daily update by the Centre for Covid-19 Situation Administration on Friday. The center added eight new cases involving returnees from abroad. Taking the total tally to 3,727. It is expected to be added in the report on Saturday. Meanwhile, a 21 year old South African woman was arrested on Koh Samui after signing for a package containing 250 grams of MDMA. An ingredient in ecstasy. Friend’s say she’s innocent and have already raised US$2,966 to get her out.

Ashley Oosthuizen has been living in Thailand for more than 2 years. She worked as a teacher at an international school in Koh Samui, according the Thaiger.

While Ashley was at work, a package was delivered and addressed to her former boss. She signed for the package, but didn’t open it and set it aside. Later, the police raided the shop and searched the package, finding 250 grams of MDMA. Ashley was arrested and charged with importation with intent to distribute a Category 1 narcotic.

Her friends say the case against Ashley is absolutely horrible! There is no evidence excepting the unopened package addressed to her former boss but because the package contained 250 grams of drug they are holding her as the one responsible.

Ashley was drug tested and came out negative. Her friends say they expect the case to be dismissed, but say Thai courts move “painfully slow.” They don’t want Ashley spending time behind bars waiting for a court date.